The following position comes from the game between Wu and Sakata they played in April 1939, and which is extensively commented in Sakata's book Killer of Go. Sakata plays Black. The question arises at move 35. 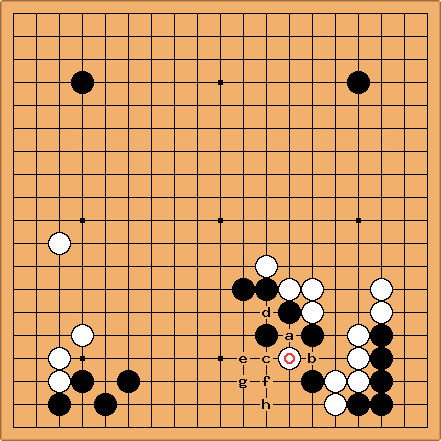 . Sakata discusses three possible answers to this peep: connect at a, connect at b, or block at c.

Sakata says: The connection of Black b here, will be followed by White's cut at a, Black d, White c, Black e, White f, Black g, White h and Black's three stones are captured. Then, in brackets, he adds a puzzling statement: (Or else, White will play c as a diagonal move at f), which I restate as Or else, White will play the diagonal move at f instead of c.

Now eat this! Is Sakata saying: "here is a sequence, and well, if that doesn't work, there is another that will work"??? I'm stunned. I read this comment over and over again, and every time I get more bewildered. 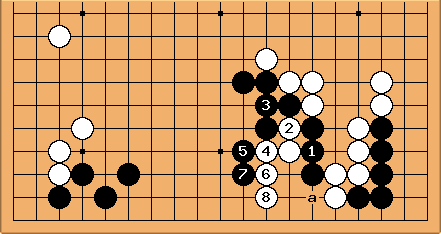 Sakata says that the three black stones are captured. Let's try saving them by attempting the connection underneath, and play a. 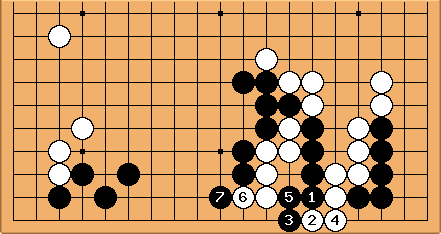 In this variation, White can try whatever she wants, but she's short of liberties. Her five stones get captured. 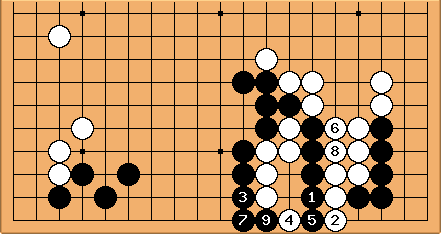 Again, White is short of liberties and loses the fight. This answer does not yet threaten the corner. (Please confirm). 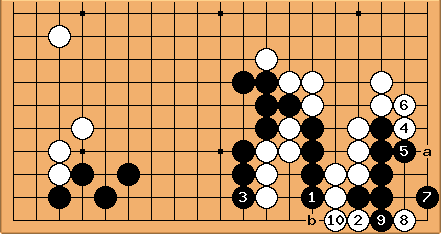 This answer threatens the corner. If Black continues at

, Black is still not alive. If he lives with a, White connects underneath with b.

I guess variation 3 is what Sakata has in mind. But then he should write: "The three stones get captured or the corner dies." Or does that speak for itself ? Please review.

But then again, what on earth does he mean with the brackets phrase? Is it just as good to play the kosumi? Is it better? He doesn't calculate because he "knows" ? 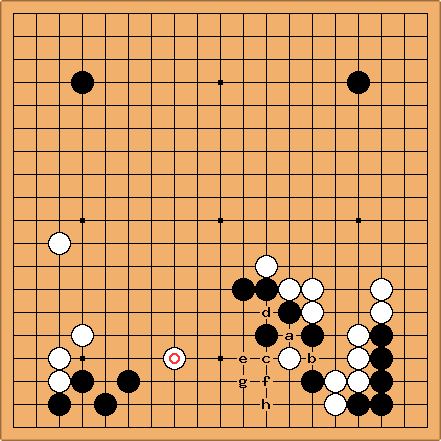 Ah, I've got it. There is a stone missing:

And about the stunning remark, I guess Sakata wants to say that White can play either way. It's 8 AM now, and I'm much calmer.