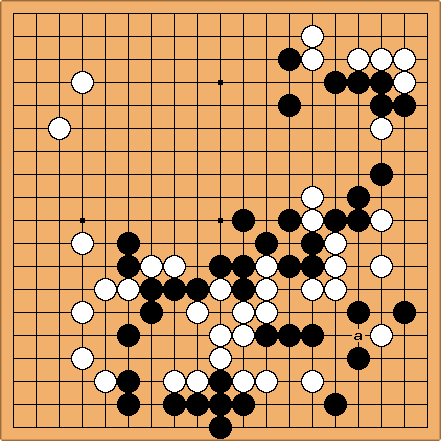 This is the position after move 84 in the second game of the 46th Honinbo, with Cho Chikun holding the white and Kobayashi Koichi the black stones. The action is in the lower right part of the goban, and Cho is trying to make life for his white group there. This is the key sequence of the game (which was won by Kobayashi, by the way). The comment I struggle with says that connecting at Black a is not good. 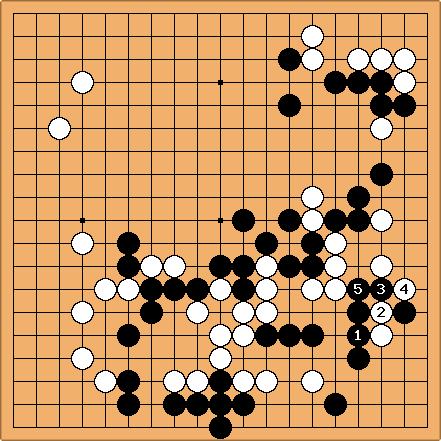 This is what White wants: he plays degiri with 2 and 4. 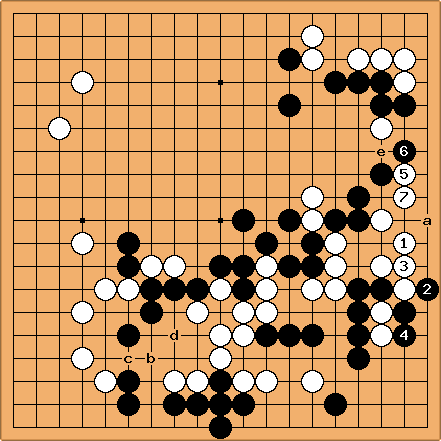 This is the continuation of the Diagram. The comment says that White creates eye shape following this sequence. If Black then plays a, White makes his second eye with White b, Black c, White d. It says that Black can't counter with c at d because of shortage of liberties... and I don't see that! This may be a case of simple reading blindness (lecturopia vulgaris), so it's probably not too hard for some sensei out there to enlighten me a little.

Perhaps just to deviate from your question, instead of White b, Black c, White d, why not just play White d to secure the second eye?

Because then b would be Black's sente - a 1 point unconditional loss is unbearable in a pro game. I think the real answer lies in the ko fight resulting after Black d and White pushes through. It looks to me as if Black cannot win it, so he has to submit and connect when White plays b. --deft 1k* 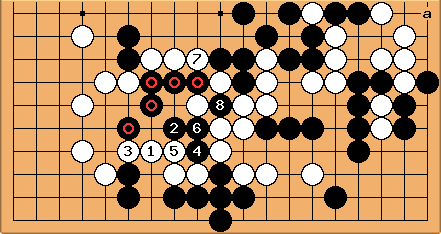 Andre Engels: Here is what I think is meant: After Black 4, White 5 gives atari; and then White 7 starts a fight. If White next wins the ko at 8, Black's 8 stones (the marked 5 plus 2-4-6) will be captured. I assume Black is considered unable to win this ko, and thus the cut at 4 does not work.

NRFanshawe?: I think that after white wins the ko at 8, black can still capture the three white stones including 7, so his marked stones are not lost. Of course, this does not change the fact that the cutting stones 2,4 and 6 will be captured by white, which means that the cut does not work.