This is the game between SakataEio and Wu Qingyuan, which is described in length in Sakata's book KillerOfGo. It was full of thrilling fights and eventually ended in a one-point win for Wu. 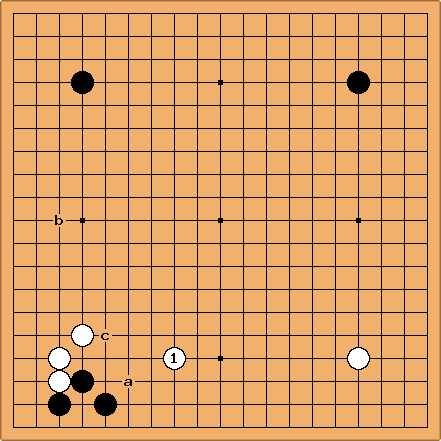 Sakata comments on White 1 that it's a new idea. He considered three replies: a (safe), b (kind of tenuki) and c (seemingly natural).

Sakata chose a and I'll discuss the other moves briefly. 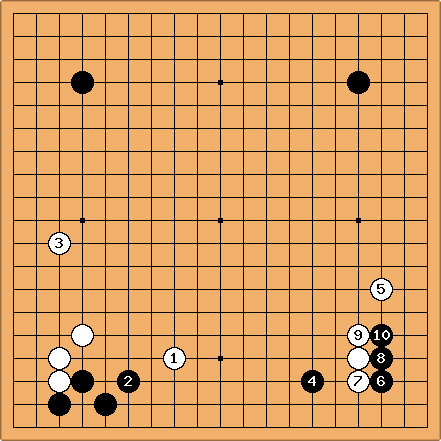 The game proceeded like this. Sakata basically criticizes 4, because he had to play kakari from the wider side. At 6, he didn't know how to continue, so he decided to settle the shape and then decide how to play , quite an unusual idea as far as I know. 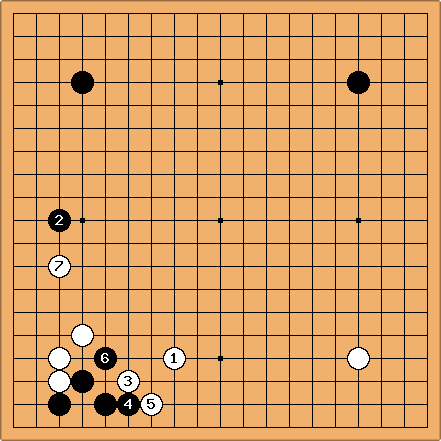 The tenuki would comply too much with Wu's style. That's what Sakata says. I can smile at this comment, but not fully understand it of course. 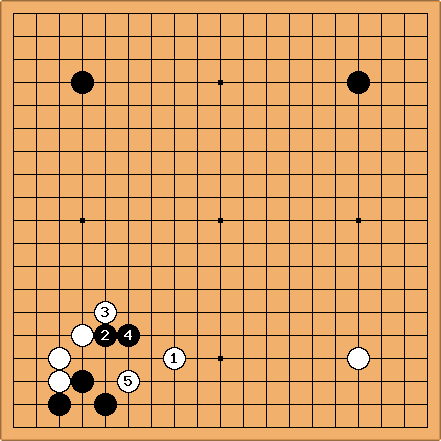 This variant would be falling in with White's plan, says Sakata.

Now, I guess that everyone, except maybe strong players, wonders what happens if Black simply plays the "joseki" move, that is, the move that makes you think of the joseki shape: Black 2 in the next diagram. I certainly couldn't help but wonder, and it is interesting that Sakata doesn't even consider it.

I guess a strong player dismisses 1 immediately because of 2. 1 through 6 seem forced to me. At 7, Black seems to have the choice between a and b.

Trey: I think the point to the left of a is more of a threat because black threatens the cut at c which would take a large corner, if white connects at c then b is much more severe. 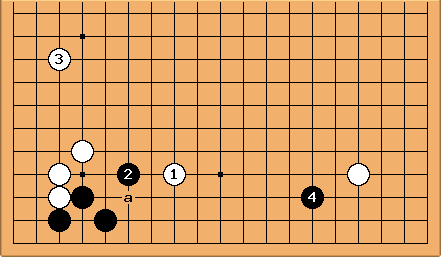 Trey: The problem with 2 is that it leaves a weak point at a that White can exploit later. given the way the game continues between Sakata and Wu that White will simply extend up the left to 3 and be satisfied with the extra aji on the bottom.

I didn't figure this out completely. This is where my BQM comes in: 1) White wins the fight ? 2) Do the players read this out or do they "feel" it ain't right ?

This is the other variation, which seems forced to me - well, if Black believes his move at 1 is good, he HAS to cut. Now for the continuation.

I think 1 is the toughest resistance. Likewise 2, or so I thought. But after 8, the cut at 9 is terrible. So White 2 maybe hane first and then make a HangingConnection with 4 at a ?

In the variation shown here, I think that 2 is a slack play. If White simply plays 4 immediately, she can connect underneath in sente. As a result, she has time to come back and defend against the threatened cut at 9. --DaveSigaty

Thanks for your opinions. --Dieter