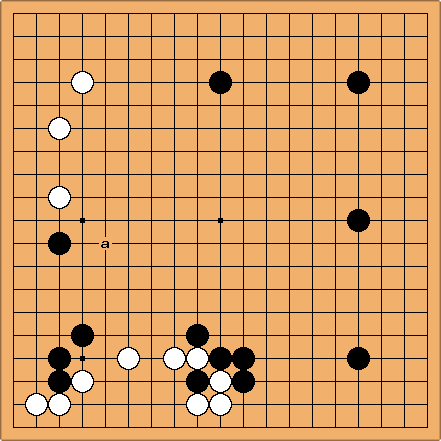 Jesse: I was playing Black in this position and felt comfortable, since White was playing on such a small scale. (Although I have since learned through Kogo's Joseki Dictionary that a play at a is urgent.) 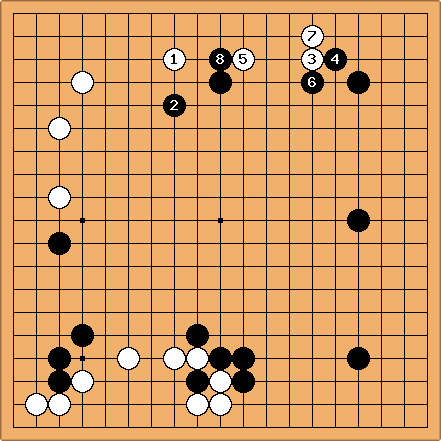 These moves followed. It seemed like a good idea to try to keep White separated with

, but the stones around it later got cut off and became weak. 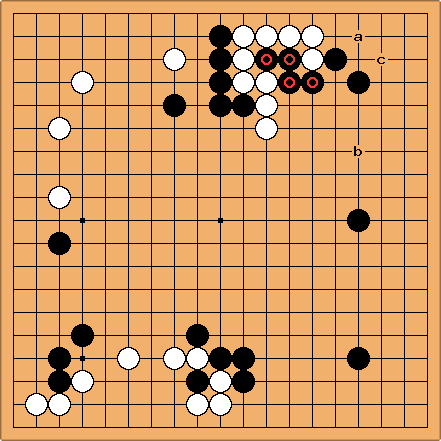 This position arose. My main question is how I should continue here. I want to make territory on the right, but on the other hand I don't want the group on the opposite side to become a huge burden. Furthermore, do I need to prevent a White jump to a? He did this, and it was enough for immediate life, but I think I completely messed up the continuation.

Bill: How about Bb? The

stones have become a burden, but the situation is not all that bad. Black's wall here needs an extension, since it has no eye shape.

As for Wa, who cares? You can reply at c (assuming you have already made an extension). Small potatoes.

Jesse: Ok. The reason I asked about a is not because I was worried about the "potatoes," but because I wanted to keep White weak. It seems that I can after your move c. I should probably be happy if White feels the need to play along the second line, anyway. (Also, is there a page here about replying to such moves?)

Bob McGuigan: I like Bill's suggestion of b for Black. Black's group in the top middle is strong, White's chain at the top has only one eye in gote. Black can easily invade White's area in the top left. Black has some thickness in the lower center. I'd say the position favors Black continuing the moyo strategy started with the original san-ren-sei (I'm assuming). 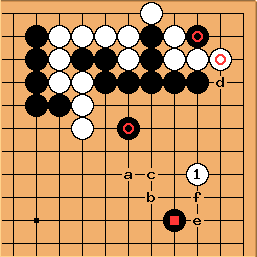 Finally, White played here later. It doesn't look good, but I was unable to come up with a satisfactory reply. Is there one, or was there a defensive move I should have played earlier?

Bill: It's hard to give an answer without seeing the whole board. You certainly do not want to wait for Wa or maybe Wb. OTOH, you may not have much choice, if you need to play the iron pillar at e, for instance. You may have to play Bc, but in general you don't want to make such a defensive play.

Earlier, you probably should have played

or Bd in response to

stones, nor some of the others I mentioned above. You ended up with a heavy group, and may have to pay the price for it.

Jesse: Yes, I realized I played poorly in between. The funny thing is though, that I didn't see it as a heavy group. I guess I just didn't realise the effect of the neighboring White stones.

How can I determine that Bd is a positive descent to the second line here? Why would I need to play at e?

Bill: Why don't you show us the whole board when White descended with

, and later, when White played

? Then such questions can be intelligently addressed. :-)

As for the Black group's being heavy, the lack of eye shape is a big clue.

Jesse: Certainly I can show the whole board. As for the heaviness question, I'm sure it's simple for you, but it isn't for me. I couldn't tell that the

Bill: Well, I guess it looks different to you now. :-) Experience is not a bad teacher.

I was talking about the wall with the

stone. How many eyes does that group have, 1/2? The

stone could be a necessary extension from a wall without eye shape, but it is too far away, given the surrounding White strength.

Jesse: Thank you, that confirms what I meant by my original comment.

Let's say that I could move

to strengthen the group. Where would I want it to be instead?

Bill: Well, I would feel better with

seems to accord with the rule of thumb that the extension should be close enough to connect to the wall despite an invasion, but it still seems too far to me.) Moving

closer to the wall, OC, weakens Black's moyo in the right and center. This and that. 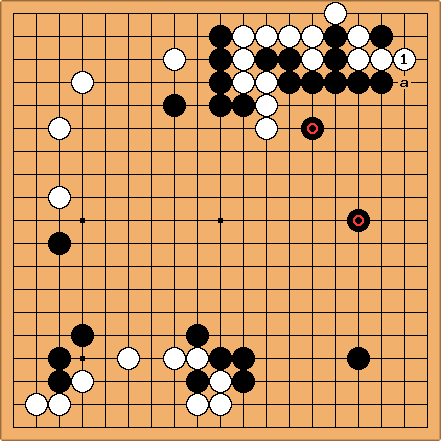 Bill: Thanks for the diagrams. :-) Now Ba is a big move. It's pretty urgent. You hate for White to live in sente, but Ba protects the wall and almost makes territory. The 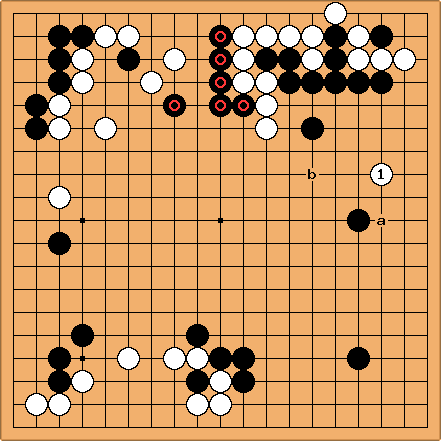 Bill: Black has no territory to speak of and two large, weak groups. It's too early to resign, however. The

stones are almost dead in the water. They can be saved, but the cost can easily be more than they are worth.

With only one weak group Black could consider Ba to strengthen his moyo and try to catch up, but that's too desperate a measure, here. I think I might try the jump to b. That strengthens one weak group, calls to the other, puts a little pressure on

, and may help form a center moyo where Black can make some points.