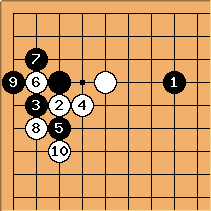 Ishida says that in the presence of

, this sequence is not ideal for Black. He says something like "it makes

not working well here.) I fail to see the relationship. Can anybody suggest what Ishida might have been thinking? What would be Black's punishment here? 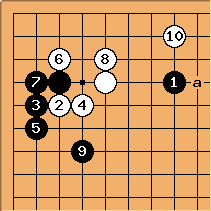 Instead, Ishida recommends this as joseki. Does

look better here? Perhaps so because it forces White into a low position on top and Black has got potential on the left. Without

, White could develop more territory on top. Maybe I've answered my own question. Have I?

kokiri: I don't purport to know much about joseki, but in this diagram if

were absent, a white play at or around there (perhaps a would be best) would look good. Instead White is forced to play

. In the top diagram would White like to play across the top? I don't think it's that big to play there locally, so maybe

is not really working very hard.

SnotNose: Good point kokiri. An irritant for White in the top diagram is the aji of the ladder. So, while

may not be very effective, the ladder aji is very annoying.

Andre Engels: The upper joseki gives White a lot of thickness. The stone at

will next be too close to that thickness, and thus misplaced.

kokiri Interesting - I thought of it in terms of direction rather than thickness. I'm interested that you consider the white thickness acting across the top - I'd only worry about it 'facing' downwards.

Without the pincer, I've played the top line as a takamoku joseki quite a bit recently (as White), and it's nice shape to play locally, but the pain of having to stay alert to the threat of a ladder breaker is easy to underestimate.

Charles Agree with Andre. (I feel like writing 'of course'. It is better for me to analyse the feeling behind this. Slogans like don't make your own stones look misplaced come to mind. Another is go is modular, but not that modular:

is close enough to the corner so that you can't expect joseki for the first seven lines (counting from the left) to fit with it, automatically.)

SnotNose: It's funny how the same (or similar) idea can lead to different views of the same situation. (Okay, this is really overstating it but perhaps you'll forgive me :) I agree with Charles and other contributors. I see the suboptimality of the first diagram and the merits of the second.

However, I dislike absolute statements or fixed ways of thinking. In that sense, what Charles says fits perfectly. One can't just assume the sequence is okay when the context changes. On the other hand, one can't assume the sequence in the first diagram is bad all the time either. The ladder aji may be significant and Black may be justified in selecting the sequence, regardless of the pincer, just because of the ladder aji. No? Am I taking this ladder aji too far? I admit the possibility :)

Anyway, I do think it is fair to discuss joseki in a local context, for the most part. However, a complete analysis should account for the aji, especially when it is an obvious ladder. Can one really just dismiss the first diagram in the style of Ishida. Is "it makes

uselss" enough? Or should one say, "Black must have a very good use for the ladder aji to make

I'm going off topic here but this is something I've been struggling with. Strong players and books often end the analysis just a tad early for me and with statements that seem too absolute. Maybe that's better for the student. But it bothers me...

Charles Brief comment about that: you probably can do it that way: otherwise small board go would be impossible. I mean, learn some good sequences on a 7x7 corner, and presume you can correct and unlearn later when you need more like 11x11. But I can't recommend it.

SnotNose: Perhaps. But to be clear, I'm not proposing that. I like to know the whole story. I like to know about what circumstances across the board might make this bit way over here good vs. bad. This is impossible to do comprehensively. But it is easy to do just a bit more than many books (rife with "the only move" and "Black's pincer now looks foolish", etc.). Perhaps I expect too much of the books :) Anyway, that's when I turn to SL. So forgive me for trying to push the limits a bit. But by pushing them, we can get better content on SL than can be found in (English) books. That's worth pursuing.

has some value yet, of course, but it does not serve the initial purpose. The pincer was played to make White uncomfortable, and procure something while White defends. As a result White is rather thick and may develop downwards. At the same time the top is not a promising area any more.

In the second example Black can develop downwards and the top is not a promising area anymore. The price is a little more in the corner. Not that much, actually. The second position looks better. Still, the game is only beginning. 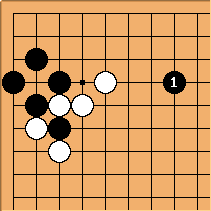 ferdi: Imagine all the other moves played before. Would you now play

? No, because it's too close to White's thickness.

BobMcGuigan: I sympathize with wanting to know all the contingencies (re ladder, etc.) but in fact that's impossible. There are just too many possibilities to cover. For example, if there were a really severe ladder break for Black somewhere in the lower right then White shouldn't have played this way in the first place. In the end I think it has to be left to the player to decide on the spot, looking at the situation in that particular game. I haven't checked in Ishida's book but the convention usually is to say something about the ladder having to be good for White. That could be taken to mean that any ladder break is not too severe.