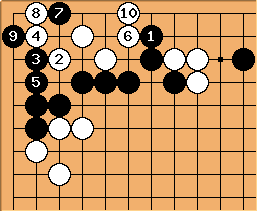 Snotnose: In a recent handicap game, this sequence almost occurred.

and a black move there killed the corner. However, backing up a bit, should White be able to live here? 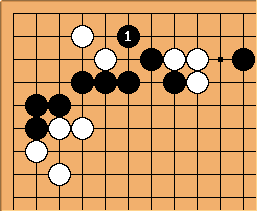 If Black had played

here instead, the sequence in the previous diagram would not work for White.

I fail to see how White can live. Can she? 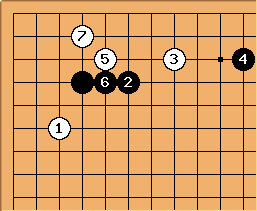 Backing up further, here is the essence of the shape.

In the diagrams above, Black had made some forcing moves to disconnect

from the corner. I show this shape to raise the more general question about what variations exist for Black here.

was played to coordinate with a Black star point stone in the upper right. Prior to this game, I had not seen the

combination before so I had to invent a strategy on the fly. I opted to seal off

, thinking I'd then kill the corner. But, had White not made an error, the corner would have lived. Was Black's strategy sound? Should the corner die if it is disconnected from 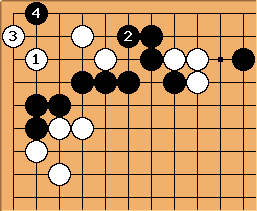 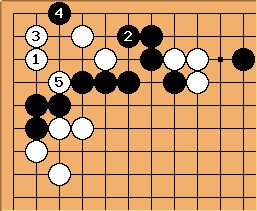 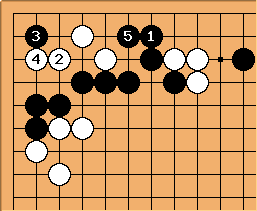 Andre Engels: To understand more of zook's comments, please note that in the game sequence, black could have killed white with the combination of

. I myself would have played

in zook's first diagram at

, but it seems that both moves kill. 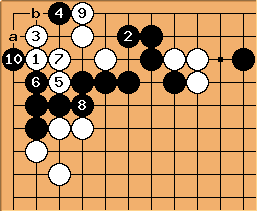 Thanks André, i had forgotten to come back. So here's the completed second diagram.

is necessary to make an eye around

makes leaves a and b as equivalent. --Zook

Charles This is a known way for White to play, at least in a handicap game. As I recall, Kitani liked it. (I have had a bad experience playing it with White, though.) 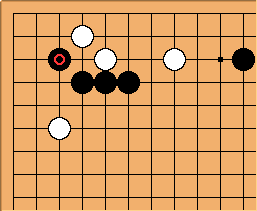 There is a concealed point about shape here. Black's play at 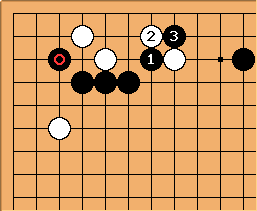 Next Black can aim at the

Thanks Charles. So if White insists on living in the corner, I suppose one might expect the following. 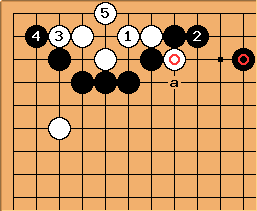 Black might finish off by playing a for a very thick position. Depending on the position, perhaps a could be omitted for now. Notice that

to the edge. This partly explains the value of this two space low pincer. A more or distant or higher one would not work as well.