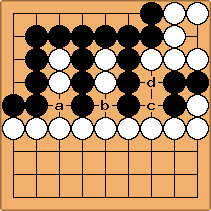 RafaelCaetano: Maybe I'm just repeating Charles, but anyway my question is more concrete: what's the largest move? Is it the best move?

Interesting. "Absolute sente" seems to come from the follow-up to the alleged sente move. In good old deiri counting, a and b are 4 points in gote and c is 1 points in sente or reverse sente. Clearly though, here, c is the best move for Black, taking a point and leaving a and b miai. This is a typical counterexample of the deiri endgame heuristic[1] that sente plays are worth twice their value in gote.

If we work with miai counting devices such as local tally, the count is different.

a and b are worth 2 points (four points, local tally 2). c is worth

if White c, Black d as opposed to Black c, the local tally is 1 and the count 1. Miai value 1.

If so, then in this case the miai counting heuristics comply with the proven position: both give c as the biggest point to play. BUT ! 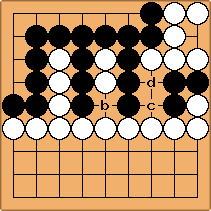 The deiri heuristic starts from the assumption that at any point of the endgame, the second largest move is approximately of the same value as the largest. So if you play a move of 10pts in sente, you'll have another move of about 10 pts after that. Obviously that rudely ignores the fact that follow-up moves are often much bigger than the move itself.

The miai heuristic leaves me with an uncertainty: should I take min or max of the possible outcomes ? Is it correct to say that the person who has sente in a position, decides about the value ? Something like a miai master ?

Or is it always possible to construct provable endgame positions where a certain heuristic fails.

Charles This is a straight tedomari position. There are miai that one can disregard; and then the answer is clear.

Or is it always possible to construct provable endgame positions where a certain heuristic fails.

That's roughly what a heuristic means. If it were a theorem, one would call it that.

Zook: Well, yes, of course. But I am unaware of how much progress has been made in classifying the counterexamples. For instance, if we know that an odd number of choices tends to favour the sente play, we can adjust the heuristic, can't we ? Also, small scale examples are almost always used to show endgame principles. Maybe that's not a correct approach, given the fact the tedomari positions are so easy to build (and perhaps rather frequently occur ?).

Charles My point of view: anyone who seriously wants to understand endgame theory should indeed start here. There is a conflict between two basic heuristics, the one saying that reverse sente is worth twice deiri, and the one saying that you can throw out pairs of miai. Fortunately one can resolve that by saying that removing pairs of miai is almost a theorem (you have to worry about ko threats, but if you really have exact miai that are uncoupled from everything else, you can put them to one side). Therefore the teaching about reverse sente has lower status (and that includes miai counting therefore).

So on this I differ from authors who give miai counting, and therefore temperature, centre stage.

In the second example the rest of the game scores to 0.5, so 2 point move is the biggest.

Bill: To understand such questions, I think that it will help to consider these related problems. 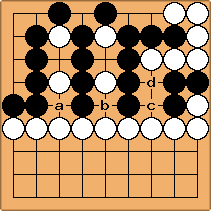 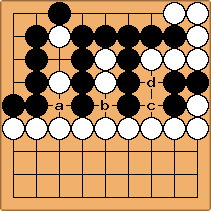 (Temperature aficionados will note that the whole board temperature of all of these problems is 1. :-))