As I have received quite interesting feedback to my previous posting BQM112 (a big thank you to all contributors), here is another position I have problems with: 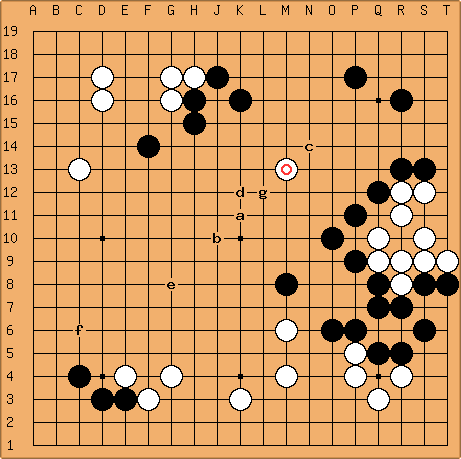 Again I have the usual questions:

Now... what I can say about the position? Estimating the score is not my strong suit, but I'd put Black up by maybe 20-30 before this invasion.

There is no doubt, in my mind, anyway, that this White invasion is far too deep. It's a moyo based on thickness, and something this deep shouldn't live. On the other hand, White is far behind, and you're both fairly weak players, I imagine, so perhaps White's best hope is to make a deep invasion and hope that you make a mistake and let her live, in which case your moyo is pretty much ruined.

Therefore, White is essentially staking the game on this invasion. You should be able to kill it, and need to do so in order to win.

Iff Does Black really have to kill it to win? Would sealing off a large territory with a move at c and taking some additional profit while chasing White not be an alternative for Black?

Alex Weldon: Playing under an invasion, if it's really an invasion and not a reduction, is generally bad. The reason being that a move played "over" it will threaten to kill outright, so the invader does not have time to dive deeper into your moyo; he has to run out. The key, as far as I can tell, is to determine when your attacks no longer require a response (i.e. threaten to kill outright with one more move), at which point it's time to play under the invasion to defend your territory, or tenuki if there's something bigger elsewhere. Actually, this seems to me to be the fundamental, qualitative difference between "invasion" and "reduction."

So, how do you kill it? Obviously, there are too many variations for any of us to read out, but the first thing you should notice is that White has one, and only one escape route. So your first move should be to cut this off. Then, you just need to prevent White from making two eyes, which shouldn't be too hard if you're careful.

Without any reading, my first instinct for Black would be a, but maybe even this is too close to the White stone. You should probably be able to swallow it up on a large scale.

Andrew Grant: I disagree. When you're trying to kill an invasion it's important to give the invader the minimum room to manoeuvre. I would play the shoulder hit right of d[1]. (at g)

As for White, the proper course of action would have been to reduce, not invade. Something like b looks like about the right depth to me, but this is more art than science, and you have to develop a feeling for such things.

Iff I tried d in the game... A low kyu player said I should stay further away from white ... around e. Therefore my question concerning some principles.

HolIgor: This is the second such example. What I noticed is that White is 100% alive with small groups. Is Black sure he did not play a lot of aji keshi?

Iff Black is sure he did play a lot of aji keshi. Thanks for pointing that out. I will try to get rid of that habit.

As to the plan of play, Black is in no hurry. Where are Black's weak points? I think Black has to fix the shape at the top where White's push is unpleasant and deprive the opponent of the pressing moves in the lower left corner. To become thick.

Alex Weldon: I know what you mean in the lower left, due to the incomplete joseki (Black wants a stone at f)... but what are you talking about at the top? You must be using the term "push" in a different sense than I'm used to...

Black is ahead. The moyo plus territory in both corners outweighs White's territory. Regardless of that, Black has to attack the invading stone by engulfing it. If he submits with c, White will close the gap and have a chance to come back in the game. If the attack fails, Black should still have territory on the sides.

Which shifts the question to "which point" ? My intuition doesn't help me here (OK, it says d) so it's a tactical matter. 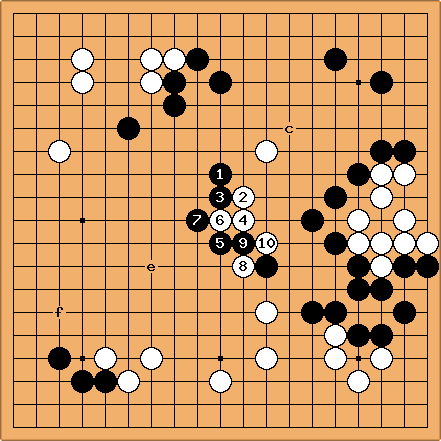 This looks a bit thin for Black, but perhaps he wins the fighting anyway. 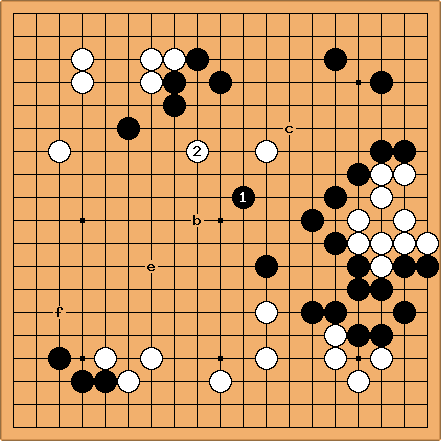 Attacking from the strong side surely is a bad idea. White's two-space jump is a light move. 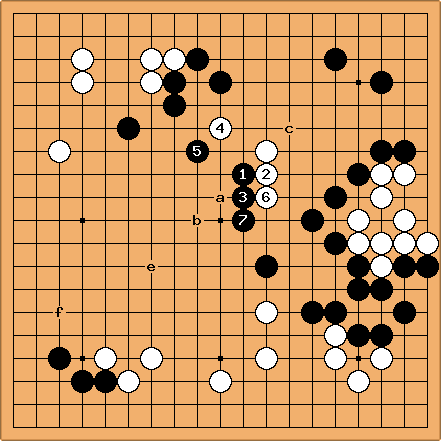 I like the shoulder hit best, although I wouldn't have considered it intuitively. 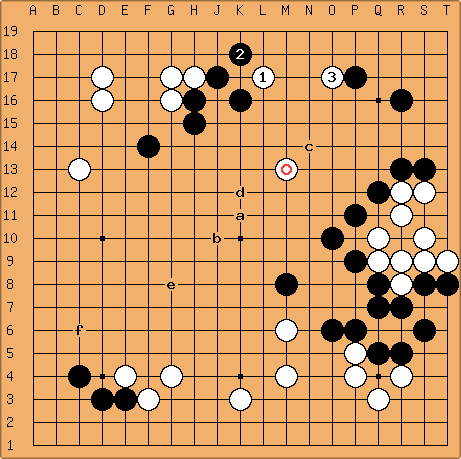 Regardless of Black's choice, White's only possibilities for sabaki lie here.

Charles I agree with Andrew here. 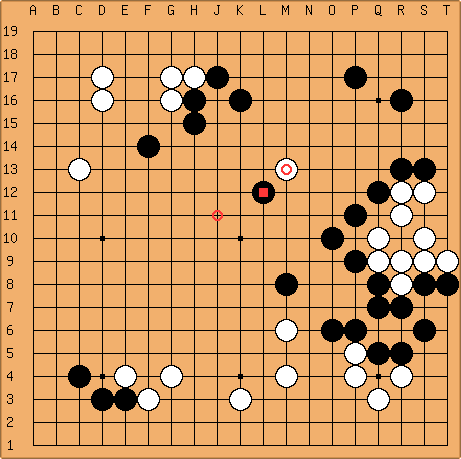 seems to be dead to me: mochikomi.

A reasonable reduction play for White would be around the circled point.