Alex Weldon: So, I've reached the stage in my Go studies that I understand and use, at least to some extent, most of the techniques we talk about here, sabaki being the latest epiphany. The last major thing that I don't see myself applying in my games yet is the idea of a probe. So, yesterday, I played one. Since it's the first time I've ever said to myself, "I think I'll play a probe," I'm curious to know if it was appropriate. Here was the board position. 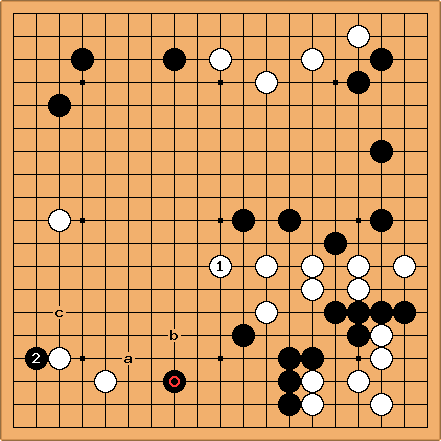 I had just been chasing the eyeless White group in the centre. When White jumped out at

I saw no severe way of continuing the attack, and decided to play

as a probe before trying to figure out how to continue. What's the best continuation for both sides, and was this probe a good idea? If not, what should Black play instead?

Charles It's probably not so bad, anyway. I've looked for pro games with the lower left formation (out to

); and in a small sample

gets played. The eye-catching move here is Black instead at a, for motare. Black at b could be good, too.

I can't see anything special to say about play after

SnotNose: As someone of (perhaps) approximate equal strength as Alex my thoughts may not be of any use to him but might be to others.

is a move I would have also considered playing. My thinking would be that if White goes for the corner territory, Black might get some stones around c in exchange (there are several well-known sequences that I won't reproduce here).

Should that occur, then Black might be in a position to pull off a double attack and/or leaning attack on the lone White stone on the left side and the White center group he had been chasing. That would be the best scenario for Black.

Should White play for the outside, giving black an opportunity to take the corner (again, I'm not going to reproduce the sequences here), Black might leave the corner potential for later, and harrass the center White group while limitting White'ls left side. That is, if White in her move emphasizes the left, Black can play to keep it small while antagonizing White's center stones. Then, later, at the right moment, Black can take the corner. This seems like a good plan too.

Since both options appear reasonable (to me), the probe appears appropriate (to me). The devil is in the details and I can't see too deeply into them.