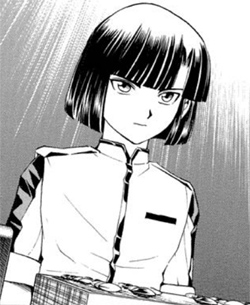 Akira Toya (塔矢 アキラ Tōya Akira) is a character in Hikaru no Go.

He quickly rises through the ranks to 3-dan. Akira plays a game with the holder of the Oza title, Zama Oza, in the Yugen no Ma in the Japan Go Association (Nihon Ki-in) building. Akira loses to the Oza after a vicious game. Akira is set to play against Hikaru in his first Pro Game, but when Toya Meijin collapses, Akira forfeits the game.

Later in the story,when they finally play in the Meijin title's frst qualifying round, Akira has the realisation that he and Hikaru are destined to be rivals, and a friendship ensues.

Akira makes the Hon'inbo League once, though Akira drops out of it (known games were defeating Ichiryu, and losing to Serizawa, Ogata and Zama). He is first board for the Japan/China Hokuto Cup match,and second board for Japan/Korea.

Akira's voice actor (seiyu) in the Japanese version of the anime is Sanae Kobayashi. In the English version his voice actor is Scott Perrie.

Importance to Hikaru no Go

Akira's importance is immeasureable,as he is one of the three major characters (with Hikaru and Sai). Akira's intensity to Go and his position as rival and later friend to Hikaru shapes the series.