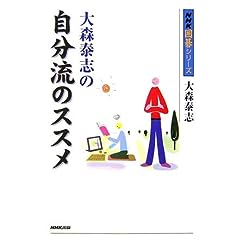 Based on Oomori's broadcast NHK lecture series which ran from October, 2005 to March, 2006.

FredK: Oomori's goal, as he explains in the preface, is to move his students away from a rigid reliance on narrowly understood go proverbs and josekis. Instead, he says, they should cultivate a habit of playing "as they please," subject to their best whole-board judgement. He likes to call this "playing a personal style" --maybe in English we would say "playing your own game"-- and he feels that it is the most enjoyable approach to Go. Furthermore, if students combine this with conscientious review of their games, especially of the mistakes, then they are bound to become stronger. (Note that this agrees with Takemiya's "Play the move you want to play" philosophy, as expressed in his

Of course, he doesn't mean that they should abandon all prior go wisdom. But at the very least, there is generally far more freedom in selecting a move than most amateurs commonly appreciate. In this book Oomori addresses five specific areas of play where he thinks amateur judgement is often too constrained and good moves are missed; and he teaches a freer approach.

The chapter titles listed above delineate his five main topics:

The later topics build, successively, on the earlier ones: tenuki is really a recurrent theme of the book; unimportant stones are not worthwhile targets of attack; shinogi operations are a component of reduction and invasion; etc.

The chapters are organized into a total of 41 subsections, each headed with a whole board problem serving as a theme diagram. Though their sources are not all given, some are identified as extracts from games between strong amateurs; and probably all of them are. Certainly, the positions have been well chosen and are all of practical interest to amateurs.

Occasionally a problem is narrowed down to selecting from a few specified choices. Both good and bad responses are explored to a satisfying tactical depth, with enough variations to be convincing. Sometimes, Oomori apparently fails to discuss what might seem to be the most worrisome response to his recommended line of play -- but then it shows up as the main subject of the next subsection; and it turns out to have been worrisome only because one is still thinking too narrowly.

Some of the subsections are grouped into sets of successive positions from the same game. Usually the actual play has been suboptimal, violating Oomori's recommendations; so we see the advantage shifting from one side to the other. Also, some subsections are grouped into sets of nearly similar but subtly tweaked positions, and so we see bad responses becoming good responses. Incidentally, even though Oomori teaches routine consideration of a tenuki response, it seems that it is never healthy for the opponent to play tenuki against Oomori's suggested moves in these positions!

Many of the discussions end with a helpful one-sentence summary of the main issue, marked off typographically. Sometimes it just recalls the most salient feature of the position just studied --that a particular stone was of low value, say-- while other times it enunciates a general principle, sometimes an unfamiliar one as formulated by Oomori. Also, occasionally, a recommended line of play that especially departs from common amateur practice gets showcased as "Oomori style."

Occasionally, Oomori digresses with a self-contained bonus mini-lesson on some aspect of the initial position not directly related to his theme. In one subsection, for example, where analysis begins at the end of a 3-3 invasion joseki under a 4-4 stone, he remarks as an after-thought that the joseki variation originally played by the defender was one which needlessly lost sente; and then he provides a mini-lesson on options for ending with sente following such an invasion. (Sonoda, too, finds amateur play deficient in this area; his Go Strategy includes an entire chapter on responding to such invasions.)

In some of the easier problems with specified choices I found it possible to guess the right one just by knowing, say, that this is the tenuki chapter -- so I'm supposed to tenuki! But the follow-up discussion was still thoroughly enlightening because, for instance, I wouldn't necessarily see, at first, why I should tenuki. Furthermore, most of the problems aren't that easy; and the right answer, in that particular chapter, is not always to play tenuki!

While there is some nominal overlap of the topics in this book with those in other NHK volumes, the examples treated are different, sufficiently so as to eliminate any sense of duplication. Beyond that, since most of the volumes in this series are based on actual public lectures given in person by the authors, we may be sure we are getting the authentic, considered views of individual, active masters. Each of the professional player/teachers in this series has a distinctive voice expressed in the formulation of general principles, the kinds of details that are emphasized, jokes, etc. So the books are not interchangeable.

This book is highly instructive and gracefully written --it is in the same class as NHK books by Ishikura and Sonoda-- and should be of interest to strong kyu players and higher. The Japanese text seems a little easier than average, somehow. Furthermore, the discussions are organized in such a way that stronger players with only basic Japanese for reading go books could probably still learn quite a bit from just the diagrams.

Here are some sample diagrams, along with condensed paraphrase of parts of the discussion, to give some specific flavor of Oomori's approach. 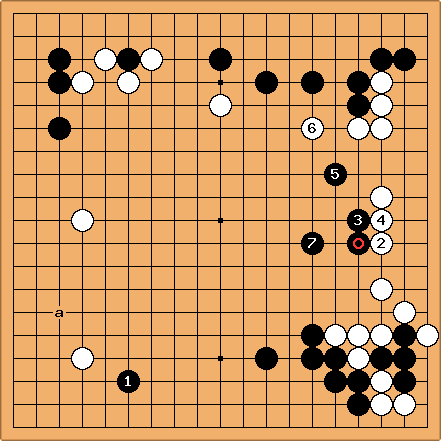 as a splitting move at 2 might seem superficially tempting. But after another few moves B would only have created a weak group which uselessly separates two strong White groups on the right side, and so is vulnerable to attack. Several variations in the book follow that out.

tenuki as played here, instead, makes fine use of the strength in the lower right.

If W next responds with

, then B, having gotten the good move in on the left, can now come back and play at the mutually desirable point

because W's right side was strong, and after

it was no less strong; so B should have played tenuki again and responded at a instead, attacking where he is strong.

An Oomori principle: Once you tenuki from a position, tenuki to the end! 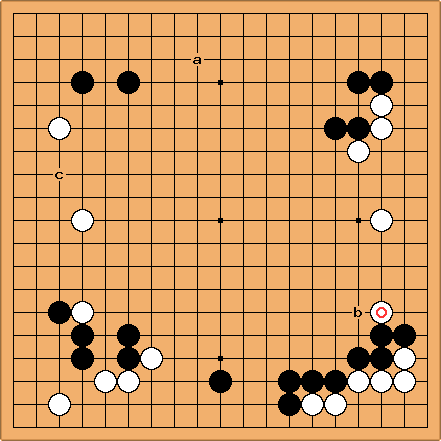 Black to move. This is one of two theme diagrams where it is discussed whether

should be the defensive move at b.

Here the answer is no, because B's corner group is strong and doesn't need defending; and

, being right next to B's corner group, is of low value; and since W is alive both in the upper right side and lower right corner, B would have nothing further to aim at.

If B does play at b then W tenuki at a would be a fine response, and a variation is supplied showing just how fine. So

should be at a instead, and if

is at b then B can tenuki again, invading at c. The diagram below is a continuation from these three moves.

In the alternate theme diagram W's upper right group is very much weaker. Also, on the lower side, instead of a B stone below the star point there are are some W stones near there, so B's "outside the corner" group is also much weaker. In that case

at b is recommended. 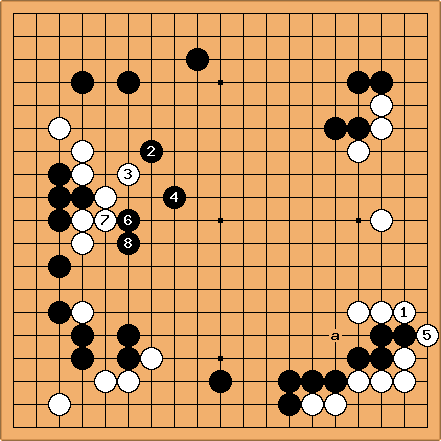 Continuing from the diagram above, Black and White play out a side invasion joseki which ends with W's sente. The book provides a variation in which

is at a and B ends up in fine shape; but here

is played down, towards the edge.

is still recommended -- Oomori pauses to show that a B move at 5, say, is not even sente against W's lower right corner. If next

, W now threatens to capture four B stones with the cut below a; but tenuki is still recommended, with B seizing the initiative at

. Surrounded by W stones, the threatened B stones have ceased to be of any importance, and can be sacrificed. 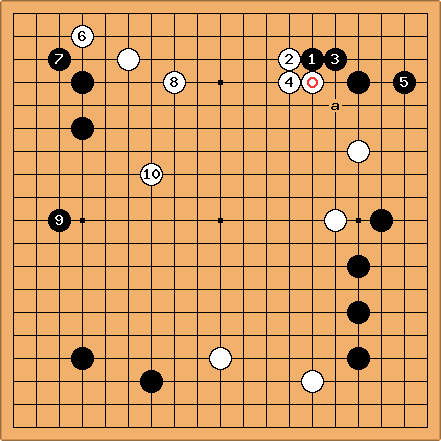 This the first theme diagram in the shinogi chapter.

Black to play. In response to

we are given the choice of Ba, running, or

yields life in the corner but ends in gote, the safety move

seizes the initiative and W gets too good a result on the outside. So Ba is recommended instead. 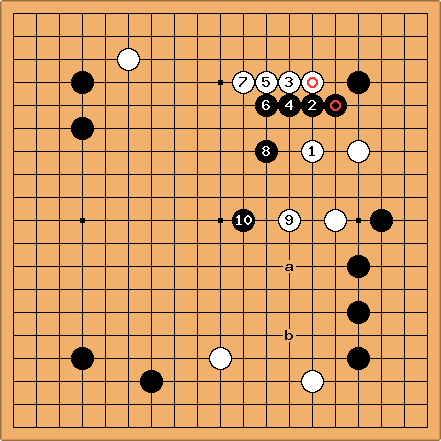 is the recommended move. Several variations are then shown, corresponding to some of the possibilities for

. In all of them, B gets safely out, with good leverage against some of the neighboring W stones.

The variation shown here continues after

with Wa and Bb. Oomori remarks: " 'Do not push your opponent along the fourth line' -- are you concerned about that? Well, after

simply are necessary for getting out."

Another Oomori principle: When your stones are weak, don't be concerned with territory. 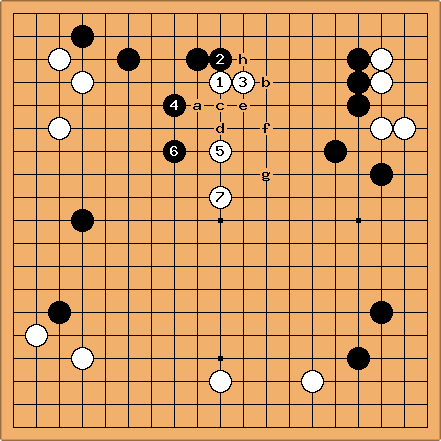 This is the first position considered in the Reduction vs. Invasion chapter. White to play and limit B's nearly complete moyo before B completes it. The choices are Wa, Wb, and

. Probably many readers know that the shoulder hit

is the move of choice, but the explanations are still enlightening. (I've condensed several detailed diagrams into one less complete but more crowded diagram.)

First, Wa is simply ineffective: via a variation starting with Bc, W hane at d, and then Be, B's moyo is nearly undiminished.

Wb is too deep, and backfires: With Bc,Wf and then Bg, W's eyeless group is attacked and chased through dame while B actually enlarges his moyo.

An Oomori principle: there's no time for invasions in the early opening.

, the shoulder hit is the move of choice.

is one of two responses considered. After

, W must not play Wh -- it is too greedy and W's group will come under attack. "Reducing B's moyo to third line territory is already a success." Following

W should jump lightly to

and then more solidly to