jettero: I have a question about rule number 7 in the AGA.

On NNGS, DGS, KGS, and IGS; when the japanese rules are in effect: If your opponent makes a stupid throw-in you don't have to respond to, you can pass and get a free point. I like that.

In the AGA rules -- I was shocked to find out at a tournament in Chicago -- they're fully encouraged to try their stupid moves because it doesn't cost them anything. Because of rule number 7, you have to give them a stone every time you pass. Am I misunderstanding the rule?

Also, there was a general perception that white must pass (a stone) last. Is that also true?

By using pass stones, with White passing last, when the score is tallied, each player has the same number of stones on the board. So you can ignore the stones and just count the territory.

(MtnViewMark: I believe he means after the prisoners and pass stones have been used to fill in territory.)

These rules do have the effect you mention. However, they appear to alleviate some problems beginners have with deciding life and death and ending the game. When players get better, they have fewer problems with those decisions and are much less likely to make the kind of needless play you are talking about.

jettero: This is interesting. In every single game I played on Saturday (6 games actually), people were passing stones and filling territory with captures. It would seem we were all mixing japanese and chinese scoring.

StormCrow: If you aren't using area (chinese) counting, that is the proper way to score AGA style (filling the prisoners back in, including pass stones, and then counting the spaces). With area scoring, it doesn't matter if you keep prisoners or not, the count comes out the same either way.

Bill: Jettero, with pass stones you do fill territory with captures, dead stones, and pass stones before counting the territory. That's really Chinese-style scoring, but with a Japanese-style counting method. ;-)

jettero: OK, now I really really don't understand the pass stones... Is there some way to clarify for me? Presently I'm planning on counting some things on my 9x9 board at home... Wait, I think I get it... But we were not counting the stones, just the open moku. The only way I can figure that it doesn't matter if you count caps or not is if you count the stones too. I think you said above that you are supposed to count the stones, but we did not.

rubilia: AGA rules ensure that the total amount of played stones of each colour in a game is equal. The surrounded territory counts both ways, and about the stones, you arbitrarily can count either living stones or prisoners, because the difference will be the same. Actually, you can find lots of counting techniques, but scoring there are only two main rule ideas of: chinese "area scoring" and japanese "territory scoring". AGA rules use the chinese one.

Bill: Here is an example on a 5x5 board.

, ends the contest, but White must make a final pass.

, are placed in White's territory, and Black's pass stone,

, is, too. Also, to make it easier to count, one of Black's stones,

Black has 5 points of territory to 4 points for White. Black wins by 1 point.

If we counted area directly, the score would be 13 to 12, also a 1 point win for Black. White's final pass made the number of stones for each side the same (8), so the stones could be ignored in counting.

Mef: Just for clarification, under Japanese rules, would white get a jigo?

Bill: Yes, it's a jigo under Japanese rules.

Mef: Thanks, that's what I thought, just making sure.

jettero: OK, I see how the Japanese and Chinese counting rules look similar. The part that frustrated me, and the whole reason I brought it up, was my free points. What if the board is all set, and black makes a pointless throwin. [1] 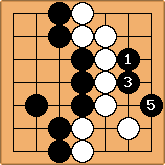 On KGS I get a free point for each move I can ignore. In the AGA rules I don't. That's what really upset me. I want black to lose something for playing the strange pointless moves... If he get's one of my white stones every time, I don't get my free points.

Apparently I am understanding the rule correctly, I just don't like it.

RobertJasiek: Under AGA Rules, your example should go as follows: 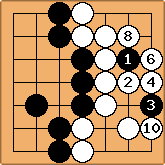 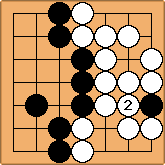 RobertJasiek: Since Sensei does not allow move numbers greater than 10, I have to start with 1 for move 11, sigh.

yoyoma: You can use a zero (0) for move 10 on Sensei diagrams. I updated these diagrams using that. At least even/odd still matches white/black. 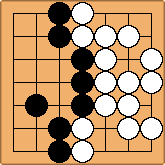 Note: You have offered a doubtful diagram that requires a careful analysis of prisoners and passes before it could have been reached. Only therefore I have to include four more numbers in the Territory Counting calculation than normally necessary.

spamcowmoo: I'm not sure what the point of the discuss page link is if not one uses it. All I ever see is these discussion sub-pages... Anyways I posted this first in the discussion form, but I'll post it here because that seems to be what people do.

In the AGA rules it states: 12) Counting: There are two methods for counting the score at the end of the game. One is based on territory, the other on area. The players should agree in advance of play which method they will use. If there is no agreement, territory counting shall be used.

So, either scoring method is allowed by the rules and territory is default. This is contrary to what is written on the page, which states area scoring is used. I will change the page to reflect these facts.

Phelan: Discussion subpages were used before the discussion forums were created. Some of those pages have been copied to the forums. Using the forums for a new question is ok.

[1]: yoyoma: I understand that you have a problem with the rules not penalizing pointless moves in the endgame. But you should also realize that there is an advantage gained: If you and your opponent do not agree about the life/death status of stones at the end of the game, you can play the game out and any dead groups can be actually captured without losing points (see rule #10 - Disputes). Also as a practical matter, many times these pointless invasions are launched while there are still dame left on the board. In this case, you can still gain points by playing the dame. 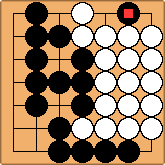 I am wondering what to do with the marked stone in this position. Ending the Game: Two consecutive passes signal the end of the game. After two passes, the players must attempt to agree on the status of all groups of stones remaining on the board. Any stones which the players agree could not escape capture if the game continued, but which have not yet been captured and removed, are termed dead stones. If the players agree on the status of all such groups, they are removed from the board as prisoners of the player who could capture, and the game is scored as in Rule 12. If there is a disagreement over the status of some group or groups, play is resumed as specified in Rule 10. Although the contrived white group is clearly dead, the marked black stone cannot escape capture either. It is therefore a prisoner I take it? So all the white stones and the marked black stone are removed at the end of the game here? In Japanese Rules white would be left with just komi. Here she gets komi and a prisoner I take it? (plus pass stones)

In the event that it's dead, we take off 18 white stones and one black stone. There are then 34 points of black territory, to add to which there are 17 - komi points of white's negative territory. The score for black is then 51 - komi? Right?

Suppose it's not dead. We take of 18 white stones. There are then 33 points of black territory, plus 18 - komi negative points for white. And the score is, once again, 51 - komi to black?

Isn't it? So the score is exactly the same? Isn't it? (Last three paragraphs Jenny Radcliffe. Darned if I can work out formatting here. Seem to have forgotten everything.)

RobertJasiek: If the players disagree after the first two sucessive passes, then they continue alternation, e.g., as follows: 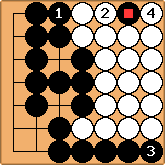 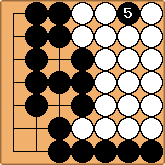 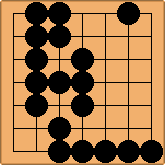