After the 4-5 point 4-3 approach ogeima, the contact play at

may look like an obvious choice but it is not considered joseki [1]. White may expect a-b-c for a peaceful result but Black can cut at b instead, leading to a fighting variation which is in his favor.

This play occurred in game 4 of the famous sanjubango between Shusaku and Ota Yuzo, where Shusaku as Black won by resignation in 167 moves, despite being "tricked" by Yuzo's ogeima[2].

If the diagonally opposite corner has a ladder breaker

directly and White can get a good result.

Otherwise, the moves here are almost forced. Now White may choose between a and b but neither gives a good result.

.After white 9 black has 3 possibilities a,b or c. 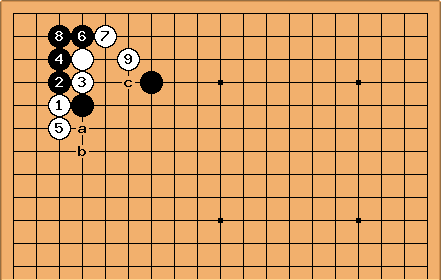 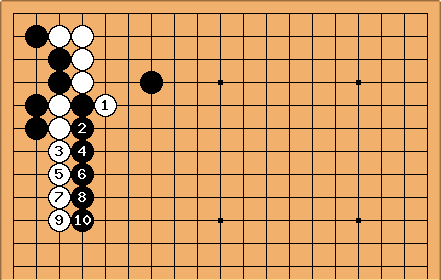 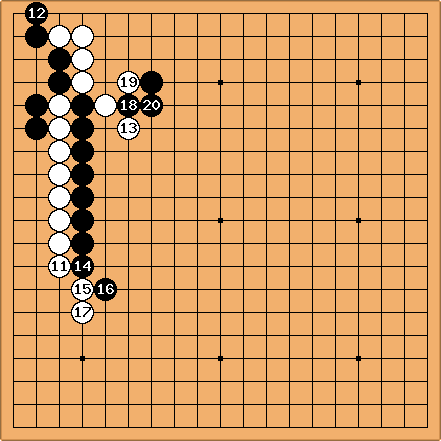 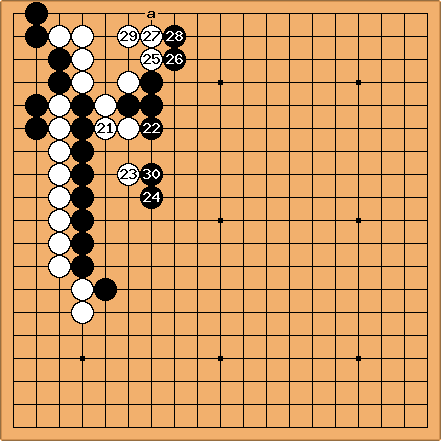 White remains with only a few points of territory, against Black's influence.

also leads to a poor result ...

[1] xela: What is the source for this not being joseki? There are 27 examples of this position in GoGoD, with a and b being equally common as the next move.

[2] The Shusaku game is GoGoD 1853-03-24a, with colours reversed compared with the first diagram on this page. In Invincible, the commentary by Go Seigen simply says "the joseki (i.e. the jump shown at 45Point43ApproachOgeima) is considered a straightforward one for Black, but giving White a ponnuki is a source of dissatifaction". There's no hint that Shusaku has made a mistake here. KataGo suggests that the inside hane is actually a small mistake in this context, but Shusaku also made some mistakes in the continuation (quick and superficial analysis by xela using KataGo's 20-block network with 2000-5000 playouts per move).

bugcat: It's worthwhile to note that the push in (2) seems to only be a pressured move, used when White needs to force for life on the top. I think that is because, in contrast to the keima position, (5) can more easily be at a rather than the usual b, since the easternmost stone is further away and thus less relevant to the various possible semeai.

Compared to when the keima is on the board, White might also have more follow up aji after the settlement following (5) c, which is a hypermodern move often suggested by AI in the keima joseki.

Also, even if the joseki from (5) b is played out, the eastern stone would still be better placed in the keima position, making a tiger's mouth in the settled shape.