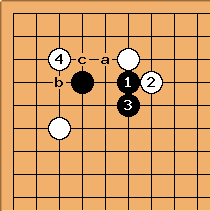 is a variation of the 4-4 point, double low approach, attach-extend joseki. The typical Black responses are a and b. Black c is rarely a good choice. 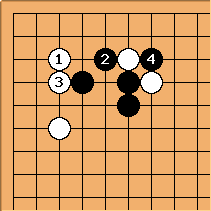 is a common joseki for controlling the upper side. 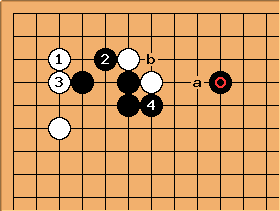 If Black has support at

will be played here instead of b to avoid overconcentration. 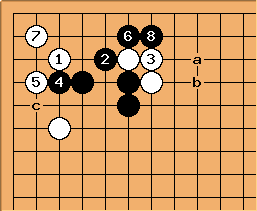 may also choose to connect, in which

are sort of a tesuji. After

, if White a then Black b, and if White b then Black a, so Black may have an opportunity to attack the White stones at the top.

, then Black c takes the corner. 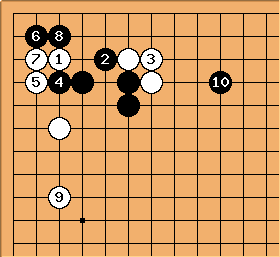 at the 2-2 point is also a common tesuji. Subsequently, 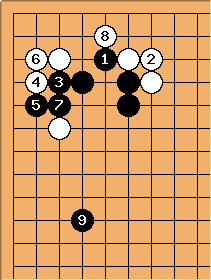 here is rare in professional games, because

connects the corner to the top side, acquiring a sizable amount of territory and possible expansion along the top side. In compensation, Black gets a wall on the left side, but it appears inferior to White's territory.

This sequence is seen in a game between Huang Dexun (White) and Jiang Zhujiu (Black), colours reversed. The game took place in China, 1981, with Black winning by resignation. 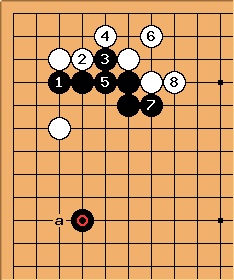 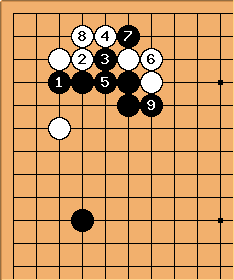 can also choose to connect, then 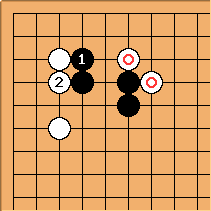 Blocking the 3-3 stone this way is rarely good. While White is settled on the left side,

did not put any pressure on the

stones are light and can easily be sacrificed.