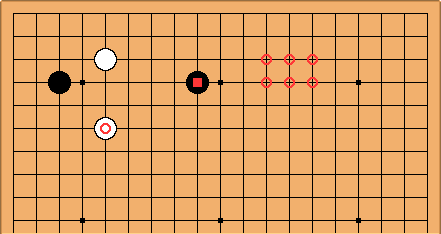 - probably playing into the marked area to support the pincer stone

is usually played to avoid a severe counter-pincer, this may simply be a logical strategy. 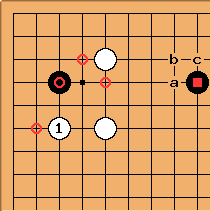 to make life. There isn't too much difficulty for Black to live somehow, with possibilities at each of the marked points. If Black does so early in the game, White will undoubtedly gain a thick outside position.

If that is the case, though, it is probably true that

is better placed where it is, rather than at a, b or c. The same tenuki strategy has been tried with each of them: in case c, the three-space low pincer, there are half-a-dozen Go Seigen games featuring this idea.

The corner aji problem here is in fact genuinely intricate. 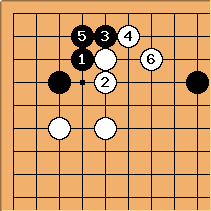 Black can get life with

. No marks for subtlety here, though. 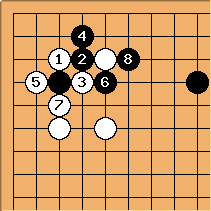 here is taught (in all these pincer cases) as White's next move here; and

as a sabaki play after that. This sequence actually is played by pros, presumably because White build unarguable thickness in sente. There are other ways to play (

) that grudge Black such a good result, but aren't clearcut either.