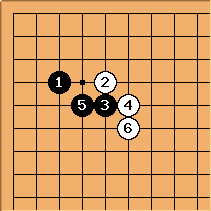 is (quite obviously) to build influence toward the center. White is however granting Black quite a large corner territory. 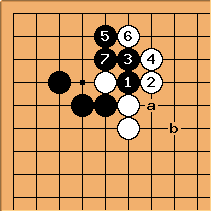 The joseki continues with

(it is very unlikely that Black will play tenuki instead of cutting;

is a fighting move only available when White is already strong to the right).

tderz: I think that a positive white ladder is necessary for dealing with the cutting point a.
My question: can one then say, playing the shape move b is too slow and not honte?

Stretching down - not giving atari 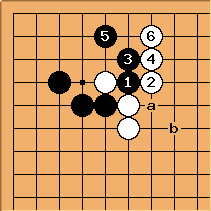 tderz: just stretching down, i.e. not giving atari is possible too. Again the ladder should be positive I think
(although now White has a loose ladder starting with b).
I think this

should only be played with some white stone(s) in the top right corner.
Question: could one then extend to

if the ladder is not working, but one has stones in the top right?

Would that be sufficient to be good?

Black takes the corner territory, White gets influence towards the top and the center. Clearly the cutting point at a makes an important ladder relationship, now.

White presumably thought about this ladder before choosing this variation, with

in the first diagram: making this a ladder strategy. 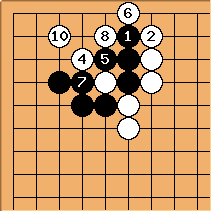 from the previous diagram might seem better, taking sente, but if Black actually does play tenuki,

Taking away the corner territory (and even the eyespace) is larger than a black move elsewhere would be. (See though tenuki is always an option.)