? I faced this in a game today. After dealing with his tenuki and gaining sente I played

. Black played tenuki again. After dealing with that and gaining sente again I played

at a. Amazingly, Black played tenuki again (!) and I got to play

at b. Finally Black defended with

at c, I played

at d and despite all his tenukis Black came out ahead in the battle in this corner. Surely White can do much better here if Black plays so many tenukis.

rokirovka: Herman, thank you so much for this extensive analysis. It's very instructive and helpful. It will take me a while to digest all of it, but it's greatly appreciated.

Tapir: My 2k first thought tells me to play

in sequence 2 diagram directly. This may be worse than sequence 2, but I'd like to know about the status of the corner then.

, if black cuts with

Herman: However, black can play like this and keep the corner. This result is not good for white, it only gains a few points and is gote.

Andy: For the above reason, white should tenuki with

instead of capturing the

stones in gote. Since white's wall is more solid, white can extend further. I think the further extension plus the possibility to pick up the

Herman: White can also play like this. Now black's corner is smaller. 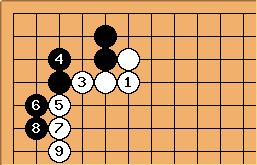 This is another option. Black's options along the left are more limited now, and black is walking over the second line.

rokirovka: This reminds me a lot of the "pincer variant" in the standard 3-4, high approach, inside contact, solid connection joseki. The following diagram and comments are from the page devoted to that joseki: 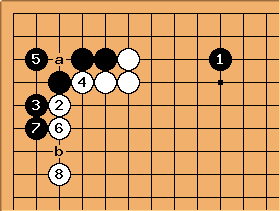 "Black can play at

if White's extension frustrates Black plans at the top. (This is bad locally, but may be playable overall.) White's compensation is to fence in Black and create substantial thickness. For both players, knowing how to handle White's thickness is key to playing this variation.

: the connection can also be at a.

is a little better than b. (Compare with getting ahead with a one-point jump.)" 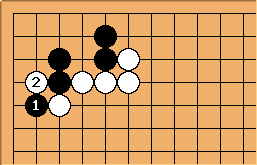 is a possible alternative for

in the previous diagram. Now, black must make a choice: 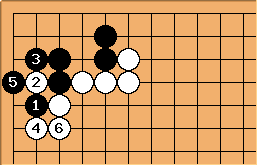 Like this, black is sealed into the corner, and white's position toward the left side is better than in the first diagram 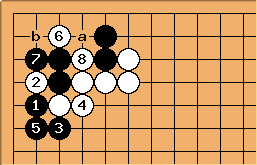 Like this, black escapes on the outside, but loses two stones.

is mandatory, if black defends at

instead, white will connect and black's corner will die. After

, black cannot cut at a, because b is atari, so black should exchange b for a, then tenuki

If black a, white cuts at b and it is the same as sequence 1.2 above.

But what if black b?

With the exchange of

already in place, black cannot escape to the outside as that will allow white to take the corner. 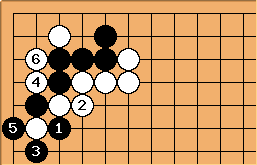 If black tries to escape, hw loses the entire corner after 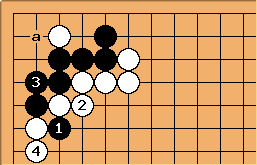 So black has no choice but to play like this. Later, there is a lot of aji is white plays a.

in sequence 4.1 is wrong, as either variation leads to disaster.