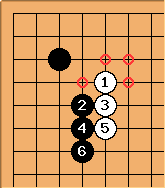 Against the black stone at 3-3,

is considered not to be a correct kakari in itself.

Black will play at

. To avoid a black move there, White is more or less forced to play at

The problem with this move is that White is pushing Black along the fourth line. The black territory is considered to be worth more than the white influence.

Also note that Black is walking ahead of White, and that White is still open on the edge. Rather than

, any of the marked points is regarded as joseki (see 3-3 point josekis).

does have its uses, and is seen in pro games.

An example derived from a database search:

The point presumably is that

makes a good relation with