I have a question about high or low kakari to a stone at the 4-4 point. It seems that if the opponent responds with a pincer then a common joseki is to invade the corner 3-3 point.

So the question is: if the pincer seems to be a likely response, why not just omit it and invade the corner directly? It seems pointless to play a stone which is most likely to be wasted.

However, as far as I know 3-3 invasions don't usually occur until mid-game, when there are no larger points. However, kakari are quite common in the fuseki. So I'm confused as to why a 3-3 invasion is too small for the fuseki, but a kakari which probably leads to a 3-3 invasion is widely used.

The idea behind approaching the 4-4 stone before the 3-3 invasion is that the invader will NOT be shut in from all sides. Compare the following two scenarios: 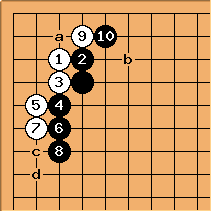 at b.) If white invades at the 3-3 point directly, she gains about 8 points of territory, at the cost of giving black has superior influence. Sure, white can "develop" the left side further by crawling to c or even jumping to d, but doing so will only help black build a wall on the third line. This is why a raw 3-3 invasion is usually saved for the middle game, when such an invasion will make black overconcentrated. 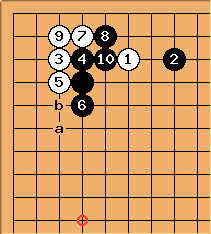 at a). But if white approaches first, this sequence can be expected if there is no marked stone around the marked spot. Notice that white has a larger corner and has gained much better access to the left side. (In most cases,

cannot be played one line to the left, i.e. at b, because the aji of the

stone is usually enough to either connect underneath or to cut black to pieces. 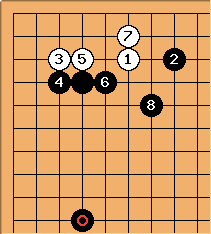 at a). Even if a side stone already exists, this result is still better than a direct 3-3 invasion. White ends with sente, and there is the possibility of cutting through

later (if white has support on the top).

Another reason for the approach first is in case black plays tenuki. A direct 3-3 invasion that black ignores transposes to the well-known san san josekis where white plays 3-3 first and the black covers with the 4-4 point. In all these cases, white takes firm territory in the corner, but black gets to build good thickness on the outside. 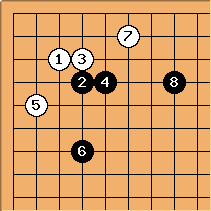 On the other hand, if black tenukis the approach, then white has the additional option of making a nice double kakari of either the double low, or high-low variety (with

at a). Both double kakaris really hold black's feet to the fire as now it's not so obvious what to do with the black hoshi stone. Thus, the approach gives white more flexibility. 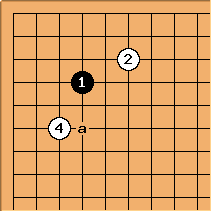