This shape came up in a game recently: 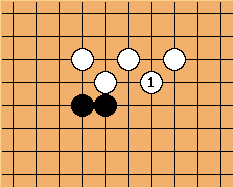 When I formed it with the marked stone I thought it was a good shape, but had a vague feeling that I'd played it before and it had proved to be bad. I guess I'm asking, does this shape form often? Is it worth having info on it? I guess if Black were to peek into all the mouths it could become a horrible dango... avoidable? 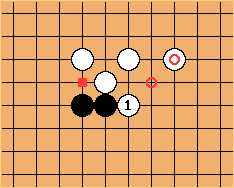 here. You were probably worried about the peep at

in place and no black stone at

there isn't much to worry about. 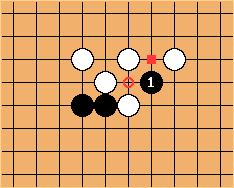 . If the shape is close enough to the lower right then White can probably kill that stone with 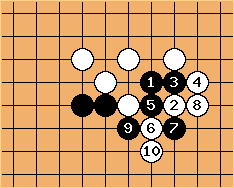 fractic: If White is stronger here or close to the top side then

could be very effective. If Black breaks out with 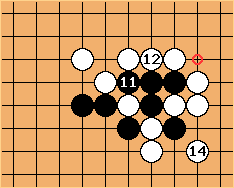 fractic: If White can handle the cut at

then Black shouldn't play this way and just abandon his peeping stone.

Well, I didn't want to discuss my game so much as I wanted to know more about this shape (good/bad/strengths/weaknesses):

or this more extreme example 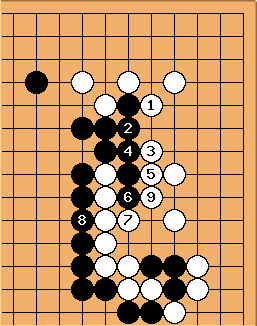 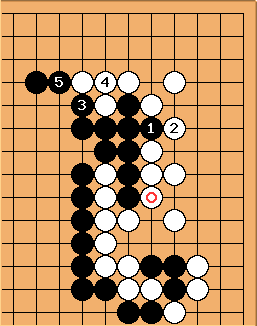 I'm sure you can tell we're both pretty new.

While the discussion is not made specific to a game, discussion of a shape has to be made in conjunction to the surrounding stones.

move in both diagrams really are not the same. 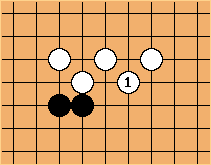 This one is usually seen as too passive. 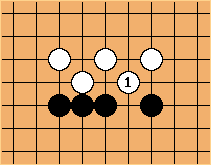 This may be locally a good move, aiming at the push. 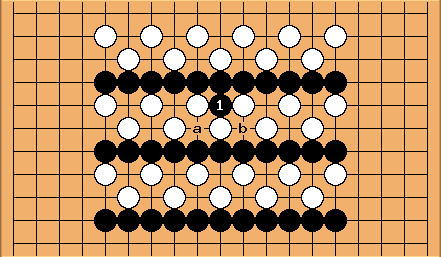 The issue of efficiency was already raised by unkx80. Shapewise, there is the fundamental weakness of the diagonal, compared to straight? development. Although this diagram is artifical, it displays rather nicely the weak aspect of the diagonal.

Both have used the same number of stones. Black can cut White all over the place, while Black is strongly connected.

Actually my point is not efficiency, although it is also a important consideration.

My point is much simpler: whether a "shape" is good or not depends strongly on the presence or absence of nearby stones of either colour. These cannot be omitted for a meaningful discussion. Looking back at his diagrams again, these are really two different beasts, even when the difference is only the 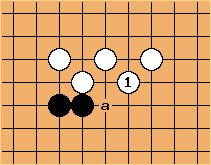 is usually seen as passive. The recommended alternative is to block at a. 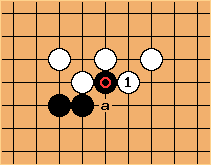 is usually okay, especially when cutting at a may result in White getting two weak groups (whether this is true will again depend on the wider context).

And then, the position matters too. 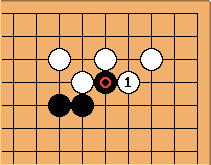 Having the stones so near the side implies that the White stones have a base and therefore fairly strong. Still

is an okay move.

Of course, all of the above have relations to efficiency.

My stones weren't quite as close to the side as I originally posted - I hadn't got the diagram right. Fixed it now though. (just telling you so you don't think it was you who misread it :) )

Shape wise, such a chain of tiger mouth can be used to quickly make eyeshape, eg: 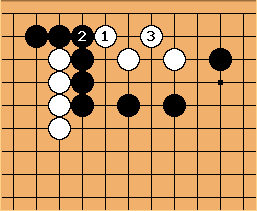 The others have already given good comments. I'll just add a bit more.

If there are no other stones nearby, then the chain of tiger mouths is inefficient.

Roughly the same effect can be obtained by a series of one space jumps, which uses up to 50% less stones. This is more efficient while maintaining the connection. For this reason one space jumps is seen a lot in games instead of tiger mouths chained together. 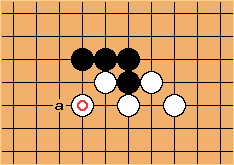 In this case, the

stone reeks of the weak player's diagonal. The attachment at a would usually be a good move for Black, highlighting White's poor shape.

In the game you provided, the chain of tiger mouths came about because you wanted to block your opponent's entry into your territory. Incidentally, this shape allowed you to secure the territory. So I have no negative comments on it.