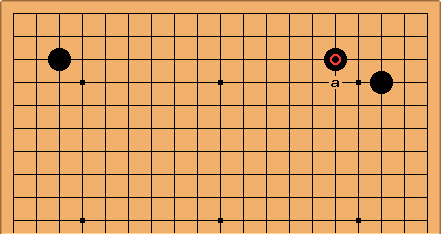 (朋斎流 "Hosai-ryu") This as a formation for Black has only ever been played consistently by Fujisawa Hosai. Experimented with also by other pros, including Cho Chikun. The low position of the marked black stone and the 3-3 point, taken together, go against any conventional idea of balance; so that the enclosure at a is more theoretically well-founded.

For White, it's a different matter, since this kind of shallow framework is a fairly typical komi go strategy: try to make up for a missing move by defending an area with third-line plays against which Black can't do anything major.

Clearly this side formation stands in relation with the Mark II Kobayashi, in the same way that the sub-orthodox formation does to the orthodox fuseki. In each case replacing the 4-4 point by a 3-3 point makes for a tighter, less ambitious strategy. In this case most pros seem to think the process has gone too far.

Consistent with that and the wedge - against Mark II Kobayashi page, a wedge play on this side isn't urgent.