The effect of unsuccessful invasions on the score

(Are there some pages on SL with simple, concrete examples of these issues for absolute beginners? I'm thinking of creating a beginner's FAQ with these sort of Q&As) 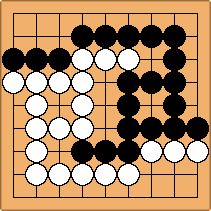 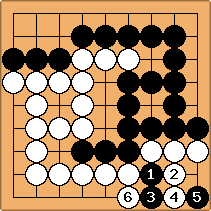 If white is forced to answer the invasion (because they threaten to cut some stones in this example) then there is no change in score. In territory scoring white gets 3 points for

, but loses 3 points for

. In area scoring all six of these intersections where white's area before, and they're still white's area after. 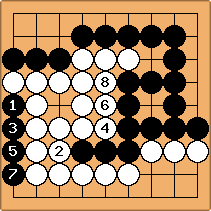 each add 1 point to white's score, because they will become prisoners (note that white could pass instead of taking dame points). In area scoring,

themselves have no effect on the score (they were white's area before and are still white's area). However, in the meantime white played

Why do captured stones count double? 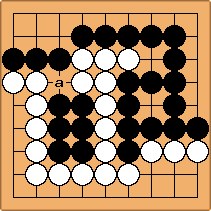 In territory scoring, if white plays a he gets 6 points of territory, plus 6 points for the prisoners. If black plays a he prevents that, so the difference is 12 points.

Since capturing or saving 6 stones is worth 12 points, it's common to say captured stones are worth double.

Value of a successful invasion 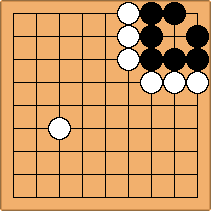 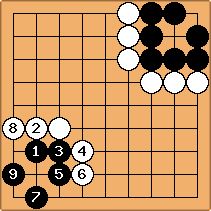 Suppose black invades, and this sequence is played (I stress this is for illustration only!) 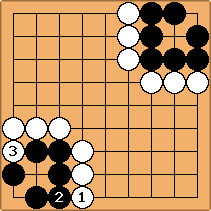 Note that if this invasion really works, white will want to play a defensive move to prevent it, so this will reduce the value of the invasion from 16 points to 15.

This example was inspired by the discussion that started below[2].

I still intend to flesh out the joseki example some more and finally stick all this stuff into appropriate pages. :)

When I teach beginners I usually use this joseki to make a few very basic points. The main points are:

Maybe I'll come back and finish this later. 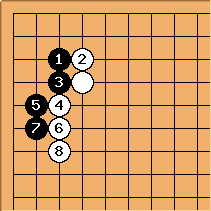 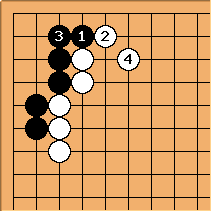 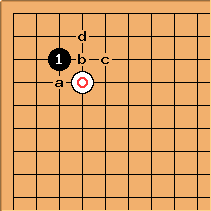 invades the 3-3 point, usually white will answer immediately, because a black initiated a fight, and whoever moves first here will get an advantage. Here usually

usually blocks at a or b, usually blocking on the side that has the most potential for white later in the game.

at c doesn't put as much pressure on

as b, there is usually no reason to hold back in this case.

at d is to thin, it leaves a hole at b and doesn't help white's marked stone. 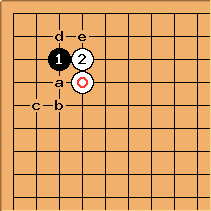 is at a. Black tries to get out to the largest area of the board, and that is the left side and the center. Black is weak here, so trying to go out faster like b or c leaves behind some weaknesses.

at d or e is moving towards a smaller area of the board. 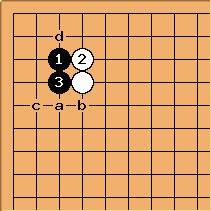 is usually at a, to try to stop black from getting out into the center, and press him lower down to the edge.

at b is more solid, but doesn't press as much on black.

at c leaves too many weaknesses behind.

at d lets black come out into the center.

[2] ilanpi: Nice page! Your remarks remind me that I once made this calculation about the effect of a successful invasion on the score: A successful invasion will win you at least 4 times the number of points your invading stones surround. This is because you

A. Win that number of point in territory.

You take away from your opponent

B. The number of points of your territory.

C. The number of stones you have surrounding the territory.

D. The number of stones your opponents uses to surround your stones.

For example, a 3-3 invasion will usually surround about 7 points of territory, so is worth at least 28 points (actually 30 due to < sign above). I never understood why the 3-3 invasion was worth so much until I made this computation.

starline: This is how I see it working. Take the example already shown earlier: 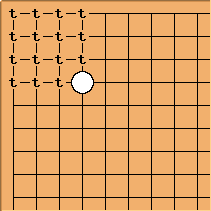 Before the black invasion you can say that white has maybe 15 potential points of territory. 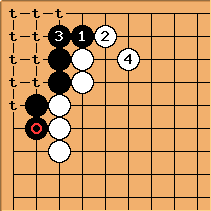 Now black has surrounded about 10 points with the invasion. So it gives black 25 points in total. In this example following whites last move, black has sente. Another factor is that white has gained some outside influence (depending on the stage of the game). Also, black has a little bit of influence poking through with the circled stone.

Charles The ilanpi reasoning is not so useful in middle game positions; but actually it is worth noting what it gives in the endgame. Here no counter-term for influence would normally be needed (or something quite small). To live you must score 2 points, and (usually) it takes a minimum of six stones to give the complete shape. So one can count this as 16 points total involved in a typical invasion. Assuming this is gote, it makes it eight points at least miai. Well, 7.5 if you count that the opponent needed a play inside one day. This is bigger than most conventional yose one can count.

Bill: And 7 or 8 points is about the level at which large yose involving corner territory frequently occur.

ilanpi: In your example, the invasion wins 3 times its territory, because the opponent's stones (Part D in my computation) would be there anyway to surround the territory, even without an invasion. My computation concerns invasions into large frameworks.

Bill: Has either player made a mistake? If not, a good way to think about this is that the invasion has gained nothing (on average). See Sente gains nothing.

starline: Isn't the invasion worth more to black if it is played at a later stage of the game (I'm not talking about this specific example, just using the idea of the 3-3 invasion) because white isn't getting the compensation of outside influence, that no longer being a factor?

Bill: It's hard to say without specifics, but if this sequence favors the invader, there are other sequences the defender can play -- such as the two step hane (

in the joseki diagram) instead of the nobi (

). Also, the defender's play or sequence previous to the invasion may have been a mistake.

ilanpi: I think the problem is that what I said was essentially a mathematical (read "abstract") remark so it has nothing to do with concepts like "influence" or actual move sequences that might occur in a game.

Bill: I think the problem is that you did not define what you mean by winning a point. ;-)

jfc: regarding ilanpi's "invasion is worth 4 times territory taken" rule ...

Area counting (chinese style) and territory counting (japanese style) each have their advantages. Calculating the value of a successful invasion is one of those times when area counting is better. With area counting, a successful invasion is always worth exactly twice the area of the invading group. Typically this is very easy to count because the invading group is small. (if it is not small, your enemy is in trouble!). Even if you are playing under territory rules, I believe that this method of calculation is more accurate than the "4 times" rule.

Tangent: While I am comfortable with using area or territory rules, I prefer area rules when teaching beginners for the following reasons:

starline: With area counting, points collected for surrounding territory are worth more than points obtained from putting stones on the board. This is because one would have to play a stone on the board whatever, so that point is pretty much guaranteed anyway. So, to calculate the value of an invasion, whether using Japanese (territory) or Chinese (area) scoring systems, there is only one way: work out the number of points nullified from the opponent by the invasion and add it to the number of points surrounded by the invading stones.

jfc: starline, I believe we are in a state of violent agreement.

The fact that playing dame (or instigating a futile invasion) when there are bigger moves left is a special case of this principle. Where territory and area scoring differ is that territory scoring punishes a beginner who makes a pointless invasion when he should pass the game out. In particular, each invading move that can safely be ignored by the opponent cost the newbie 1 point.

With regards to estimating the value of invasions: under area scoring there are not nullified points. occupied points and empty territory are both worth 1 point to the person who holds them.

Territory and area counting (for the most part) yield the same result. What is interesting is how the two different approaches emphasize different things: Looking at the score from a territory perspective makes it easier (for humans) to compare the relative merits of moves in the opening and middle game. Area scoring on the otherhand, is more useful (again, to humans) for assessing the value of invasions and certain tricky positions (e.g. "5(?) points without capturing" in Japanese rules).

Feel free to get the last word in on this discussion -- I promise not to reply to your next response.

starline: I'm sorry, but there are nullified points. If I invade my opponents territory I am reducing his potential final score. Therefore the value of my invasion is in part the number of points I am removing (nullifying) from my opponent.

Bill: In this case both area and territory scoring should produce the same assessment, since each player has played the same number of stones. Whether you count those stones as points or not, the net result is the same.

I'm not sure, but there seems to be an assumption here that the corner (or moyo) is equivalent to territory before an invasion. It is not, and so the invasion is not actually taking territory away.

ilan: Interesting discussion. It has convinced me to start using my real name instead of the server alias.

jfc : how did it convince you? I don't see the connection ...

ilanpi: ilanpi is my go server persona, so represents the vast majority of my error production.

yoyoma: Wow lots of good discussion, this inspired me to create a concrete example, see above. If you want to continue discussing in more detail using this example I made, I suggest we assume that the line of play showed in the invasion example is best play for both sides (its a separate discussion what best play actually is, I suspect black cannot live anywhere no matter the start? Although the cut point at F6 makes it a little complicated...).

Bill: I have been inspired, too. See Value of an Invasion.

[1]: Whoever plays a also gets one point of area for the move itself, but typically every move in area scoring gains a point for itself so I've ignored it here.