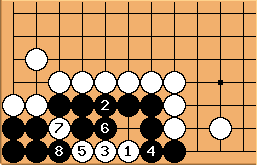 ? I cannot see any way for black to avoid this transposing into the main line. f3etoiles B plays 3 herself, then ko (for which W has no threats) 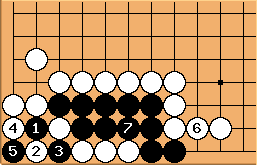 Next, the ko under the stones (

is the first incredible move;

takes back the ko at 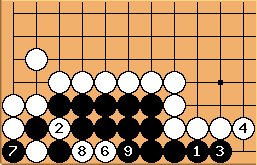 It is an approach ko, so the fight spread to the edge... (

is an inner ko threat 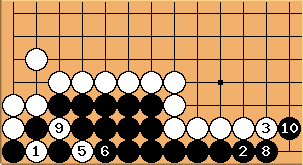 takes back. Is Black out at last?

is the last important twist : if played one point left, Black can escape

All those antics won't save Black now

under the black stones (this is a two stones edge squeeze)

The geta (or net) also seems to work. This led Denis Feldmann to suggest a variation in which the net isn't possible.

shevious: Why so complicated solution is needed? 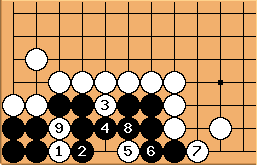 This solution is almost idential to Variation2. 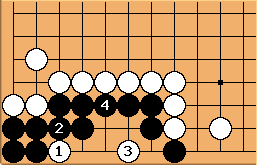 However, if b responds to

fractic: At the EGC in Groningen I heard a claim the usual solution to this problem is in fact wrong. It was suggested that Black should push twice on the first line as a single ko threat. I haven't gone over all the variations myself but it seems that either White has to let Black out at the wrong point or Black has something to work with in the lower left corner. f3etoiles Is this an urban legend ? There was something similar in the British Go Review, more than 30 years ago, but I never saw those variations, posted a message (in the French Go Review) and never had any answer. I have discussed this problem with amateurs and pros for the same 30 years, and seriously studied it again those last months for my improved(?) variant. So I can hardly believe it. Any diagram, anybody? (If I understand you correctly, you would have Black pushing twice for a single threat, at move 35 or about ? But then, black threaten to go out one line nearer the corner, and it doesnt work at all, no? f3etoiles Sorry for the above commentary. It does seem to work (see following variations) So this has been hidden for an incredible number of years ??? 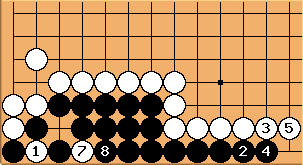 Now, of course, a number of new questions arises :-) No other blocus works (like 8 above 7 in solution 5', check it), but what about the geta (6 above 7)? And is white forced to answer the second ko threat (4 in diagram 4') at 5? To be continued, for sure... f3etoilesThe geta looks more promising, but I am certainly not confident... f3etoiles After some more thought, I dont think this ko idea is correct, as White can, too, play his own threats in wrong order. But the same idea can be used after the ko fight, giving rise to this absurd variation ,which indeed seemed to have always been missed :

Chess players would put !! in front of move 2

fractic: The idea that white can also play his ko threats at once is so obvious once you mentioned it. But your new black move is interesting.

fractic: It looks like white can just assume that the a b exchange happened and just play

fractic: The only new line to check is black pushing out with

. But I think white can just manage to keep black contained.

at a is another move to consider.

fractic: Black pushing out at a with

to increase liberties won't work since white can just play b and Black can't escape. But after

white will have enough liberties to capture the black group. f3etoiles I agree there is only one line to check here, but after 3 in your line, the clamp works for Black...

in the above diagram, Black will go to ko fight.
The result seems to be quite similar.
White

fractic: Yeah you are right. I missed

f3etoiles Just for fun, one continuation after this :

shevious: How about simple connection before ko fight?
The corner is just the L-Group.
(Black a instead of

.)
White b instead of

also seems to work, but it's complicated since

.
If Black attempts to take ko at a, White simply connects at b. 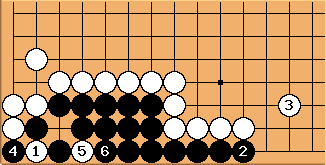 germgo: What if white plays here? 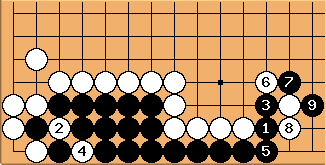 This seems to work for white.

f3etoiles: But actually, the real question is a long time before : what happens if White tries to block one line higher :

shevious: Actually, I was thinking about it, too. :)
Before discussing the variation, we need to remove the groundless stone from the problem.

shevious: I found that the existence of White at

, so I added the comment at the problem page earlier.
I've checked three most famous books of Xuanxuan Qijing by Hashimoto Utaro, Kim in and Go Seigen.
How about removing it until someone find the reference?