This is not likely to be updated on a regular basis, just some random thoughts, comments or rants that may be updated as and when I like, or never at all. Anyway, comments are welcome.

Frankly speaking, I am not great when it comes to counting. Like, counting liberties and counting territory. (I almost always makes mistakes when punching the calculator, and I always thought that enumerating and tallying things are tasks that are best left for the computer to perform.) When playing games, I do try to count. But when composing problems, I am often too lazy to count, partially because I wanted the focus of the problem to be something else. And it shows up quite a number of times. 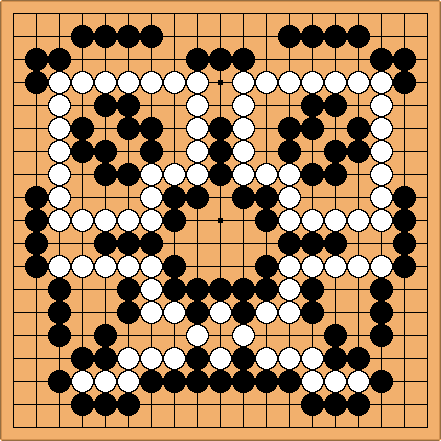 One of the most egregious examples of my laziness to count shows up in RTG Problem 60. In constructing this problem, I wanted a main variation where White kills the middle Black group. However, the resultant dead shape is even larger than a flowery six, which already has twelve liberties. Surely this group has about fifteen liberties, or even more? But I was too lazy to count. Therefore I simply gave the Black group as few outside liberties as possible, and gave the surrounding White group way more than twenty liberties. Problem solved. Anyway, I thought that this is a pretty cute cartoon-like figure with huge eyes. 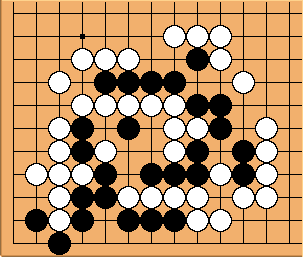 Another example is quite a bit more subtle, and this appears in RTG Problem 76. I wanted to compose a problem where the outside group must be saved, but the main line involves sacrificing the corner. However, the first requirement is quite a bit of an additional instruction. Yet, I like to compose problems with clear aims and using as few additional instructions as possible, because I feel that extra instructions are a big hassle to read for the problem solver and also a big hassle for the problem composer to deliver. (It can be difficult to state the intended messages as clearly as possible.) Therefore, I needed to make saving the outside group bigger than the sacrificed corner. But how big is each group? Being too lazy to count, I simply tacked a huge tail to the outside group so that it becomes a huge dragon. Done. As a positive side effect, it visually informs the problem solver the intended aim of the problem in a no-nonsense manner, putting the problem in the proper perspective for the reader: the outside dragon must be saved.

statistics, I have posted 166 problems at that site, making me the fourth top problem contributor in the list. (Actually there are more, but a couple got deactivated as near-duplicates of other problems.) The funny thing is that I last posted a problem in 2006 March 3, which is slightly more than three years ago. I would have thought that my position would be pushed down at least a couple of places in these three years, but apparently this is not the case.

I am also known for posting a large number of problems on Sensei's Library. However, the exact number is a lot harder to track since problems have been posted to various collections, and Sensei's Library does not explicitly track who posted what problems. However, I guess I have probably posted at least 200 problems. Some of these problems are cross-posted to goproblems.com as well.

It should be pointed out is that not all the problems I have posted either here or elsewhere are original problems. However, a number of them are my own compositions. When I compose problems, I often favour small-sized and well-defined problems. For this reason, I tend to compose many beginner level problems, although some of these problems are not easy. As a problem composer, sometimes I find that it is uninteresting to compose many problems that are very straightforward. Hence, a number of my problems targeted at the more advanced levels have one or more twists and turns, such as blind spots. A few of my more recent problem compositions feature some form of under the stones.

One of my favourite compositions to date is Beginner Exercise 45, which is arguably a beginner level problem because it search space is very small and it has very few variations, but curiously a large number of dan players failed to get it right. A very unusual feature of this problem is that the best move for Black and the best move for White are different points, which somewhat contradicts the proverb the opponent's vital point is my vital point.

A list of my self-composed problems can be found

here. This list is most likely to be incomplete. Unfortunately, I am too lazy to post solutions for the time being.

Back in early 2004, some of us from the Singapore Weiqi Association held a Go exhibition in a local library, and introduced the game whevever someone appeared. The following two paragraphs were copied verbatim from my own blog.

I guess most of the time I was teaching a father and his young son while my assistants went around introducing the game to others. Man, I had talked enough and the child was constantly fidgeting, a few times leaving the seat to look for other children to play only to be called back by his father. Experience tells me that children tend to have very short attention spans, so I should not be giving long introductions. However, it was the parent who keep bombarding me with questions thereby prolonging my introduction, which obviously made his child fidgeting even more. Interestingly, I observed that the father was holding some photocopied scientific articles, and the kind of answers that can satisfy his barrage of questions are those peppered with mathematical terms, such as "the connection of stones is transitive" and "you have to prove to me that this is not my territory".

As I ended my introduction, I asked the father and child to have a game. In no time the child captured more and more of the father's stones, while the father exclaimed that he just could not see the captures coming. I suppose there must be a difference between how a child learns and how an adult learns, as many children tend to be sharper in recognizing capture opportunities compared to most adults when learning how to play weiqi. The father also commented that switching from an international chess mindset to a weiqi mindset is not easy. Needless to say, the son won by a big margin. This seemed quite normal to me since I witnessed such things happening many times, but at the same time I can't help but to feel a sense of irony that the father asked so many questions and yet...

The teaching experiences of Dieter is always an interesting read.

I started learning Go 15 years ago, taking lessons from Chinese professionals teaching at the Singapore Weiqi Association until 1996. Lessons were conducted entirely in the Chinese medium.

It was only about 5 or 6 years ago then I started figuring out the English terminology used in Go, or rather, a mix and match of Japanese and English terms. Part of the reason was because I had a friend, who does not understand the Chinese language very well, and wants to learn Go. At that time, Go literature were predominantly in Chinese, and I have not "discovered" the Internet. I decided to write some beginner text in English, which eventually became my How To Play Go tutorial. And that was where I ran into problems. How do I describe these concepts in English? Somehow my friend managed to get hold on a copy of Teach Yourself Go. But as a rank beginner, it was difficult to understand the book. However, this book came to my rescue where it comes to terminology.

A couple of years later, I ran into Sensei's Library, a really wonderful place. This is also the place where I started to learn more English Go terms. However, my books are all in the Chinese medium. And in case anyone wonder, Chinese Go books tend to be quite ridiculous when it comes to stating the difficulty of their problems. The following three problems are in books for beginners or are explicitly rated as beginner level: 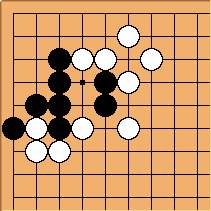 This problem was found in a book that starts off by introducing rules.

This problem was found in a book that belong to some beginner series. 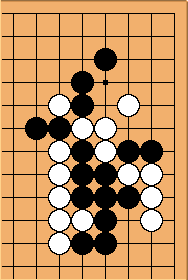 From a booklet that was translated from some Japanese booklet. This problem is labelled with beginner difficulty.

Although I find such problems too difficult to be called "beginner", such a classification scheme definitely has skewed my intuition of what is supposed to be beginner level. It reflected in the way I set many of the problems in the beginner exercises. At first, I got too carried away with setting problems that I had not noticed that these were too difficult. However, nowadays I think I have toned down a lot whenever I post problems in the beginner exercises series. Still, I still do not fully grasp what is supposed to be the beginner difficulty, and I still get complaints that my problems are too difficult. And sometimes it happens that what I perceive as easy does not tally with what others perceive as easy, and one is not a subset of another. What exactly is the accepted level for beginner exercises?

This semester, I happen to be a laboratory teaching assistant for a second course on programming, under a lecturer who is teaching this course for the first time. He consistently sets laboratory exercises that are way too difficult, the students complained a lot, and we have a nightmare answering their large number of questions and marking their submissions. On reflection, I realised that he must be thinking, it is not very meaningful to set exercises where students can merely copy and paste the codes that can be found in the textbook or lecture notes, so he added many twists and turns to the exercises.

And that must be exactly what I have been doing to the problems I compose. There are a number of times where I get inspirations from certain pages on Sensei's Library, and I wanted to post a problem on that theme, but it should not be identical, so I started to modify the problem. How much extra stuff do I need to add to the problem while preserving the appopriate difficulty is a very delicate issue, and often I miss the mark.

Karl Knechtel: May I propose that you just compose "unrated" problems and let others sort out the difficulties? :)

Rich: I think the new Beginner's Problems (207-10) are excellent! Just the sort of thing that as a beginner I would have been proud to work out, or impressed at the solution to. :)

Bill: I think that what you are doing with your problems and exercises is just great! :-) As for the difficulty level, if Beginners complain that one of them is too hard, then you might consider changing the level.

unkx80: Thanks all for the ideas and encouragement. ;)