unkx80: This page contains the discussion originally found in AjiKeshi.

Is this the same as a Thank You Move?

In my personal opinion, there is a difference. The Thank You Move, i.e. the move White really wants to play here, is White 1, which leaves her with a one point bigger territory. There is no debate that the exchange in the example is a kikashi - it just happens to be only one of different ways to exploit the weakness. As it is too soon to tell that this is the best way, it is played too early and hence aji-keshi.

Which diagram does this discussion relate to? No diagram seems to have been moved with the discussion.- GregoryWonderwheel

unkx80: This one. (Got to look into the page history of both pages to figure out; this material was moved seven years ago.) 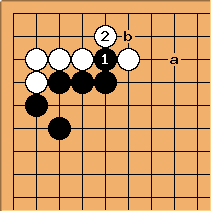 Can we agree that the set of thank you moves is a subset of the larger set aji keshi ?

May I know the difference between AjiKeshi and ZokuSuji? And we can call these as Su2 Shou3 in Chinese? Thank you.

Maybe with the following sentences:

GIF for tesuji, and one for

zoku.
Here is one for

aji, and one for

kesu, the verb form for keshi.
Thanks to

Wow! Thanks Bill! Now I can relate some of these Japanese style terms with what I know in Chinese.