Two opposing formations that only share a rectangle, where each side has two stones on one of the longer sides and two corner stones of the rectangle, form a seki; no corner stone may be omitted in this case.

Two opponent formations that share only two squares also form a seki; again no corner stone may be omitted.

Two opposing formations, each having only one square, and sharing a square also form a seki; only in the fully owned square may a corner stone be omitted.

on the side of two squares

The square structure can be recognized in many formations that occur in actual play.

The opponent can prevent the formation of a square in two different ways. Either with a single stone on one of the four sides of the square or with stones in any two corners of the square. You can also prevent squares with more stones or other combinations of two stones, but basically it comes down to the three forms below in the end.

The prevention methods can be recognized in various situations

This definition can be used to solve life and death problems. Let us start with a simple example.

In this almost completed setup the two squares in Black's collection have three overlapping intersections: one occupied by a black stone at 2-2

, an empty intersection at 1-2

, a virtual intersection outside the board adjacent to the 1-2 position (

). For White to kill this collection of black stones he must use one of the two square preventing methods described earlier. And with a single stone on the 1-2 point

White can prevent both squares at the same time, since this is a single stone on the side position of each of the two squares. For Black to save his collection of stones he must complete the creation of two fully filled squares. Again by occupying the 1-2 position

. This makes his collection of stones alive according to the definition above.

The next example has four overlapping intersections.

One of the corners of each square is the center point of the other, and must therefore be omitted. But this does not mean that a corner stone is missing. It is only covered by the center of the other square.

Black has not completed constructing the two squares, however. A corner stone at 1-2

. The latter square can however be completed with the 1-2 position

only, because one corner intersection may be omitted according to the definition. Since the 1-2 point

is shared among the two squares, playing here makes the black stones alive.

If White played the 1-2 position

first then he would prevent both the squares by playing a single stone on a side position of each square. 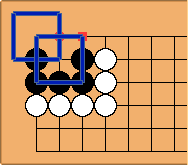 Prevent the rectangle with two stones on the frame

This example uses the three stones technique to prevent White from forming a rectangle. N.B.: The last stone is to be imagined placed outside the board. 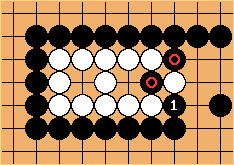 . So if Black plays one of them then White should prevent Black's square in the corner by playing the other marked position. 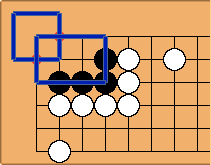 Another solution that Black can aim for is to make the rectangle in corner and the square in the bend of the L. 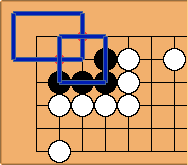 Before we look at the last way Black can try to make two squares, we have to look at how rectangles are prevented.

If Black plays first in the J-group he can quickly create multiple possibilities for two squares with a stone on any one of the circles. So the question is if Black can survive when White plays first.

, and Black tries to make two squares with his stone at

, but White prevent this with

Black then tries to make two rectangles with

prevent him from completing, because Black has to put his stones in self atari.

will again prevent this. 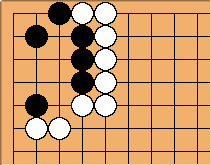 My next example is a more complicated one. This will show how to use the second method for preventing squares by placing two stones on the corner positions of a square. 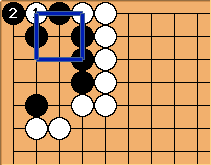 The solution to this problem starts with White

. This prevents the black square by placing two stones in the corners. Black has to reclaim his square by playing 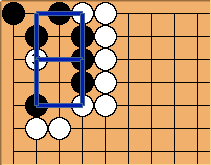 next. This prevents the black squares in from of the 3 stones 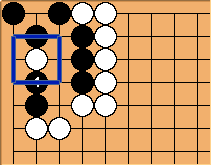 to start creating a new square around the white stone.

N.B.: This example is not completed, but I'm currently working on a simpler section above. 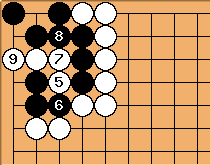