I got this sent to the GTL, and I suggest to put it on SL, but Mikael thought that SL is not up to the task (heresy!! ;o) Here it is anyway. --Arno

Mikael Runonen: This is an actual situation from a tournament game of mine. Is there somebody who could tell me what is really going on in this problem?

Why I want this solved is that that even the strongest players in the tournament couldn't explicitly tell how it will end - and these players are 3-5 dan. I'm myself 7 kyu and this problem is way beyond my reach.

In the actual game, I played White and killed Black's group. This was extremely important because I would have been forced to resign if either of my groups had died. Here are a few moves, that that the strongest players in Finland suggested.

So, I'll hope that someone could tell me what is the best result for White in this situation and that nobody will twist her brains off with this :) 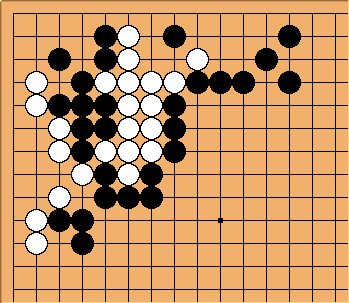