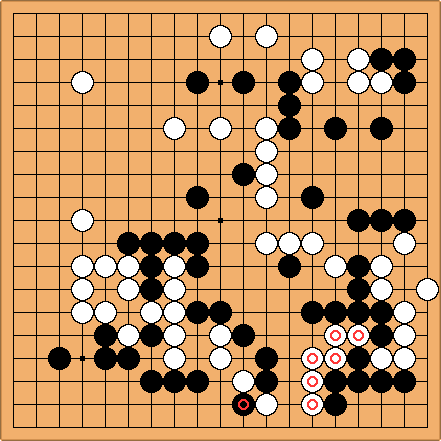 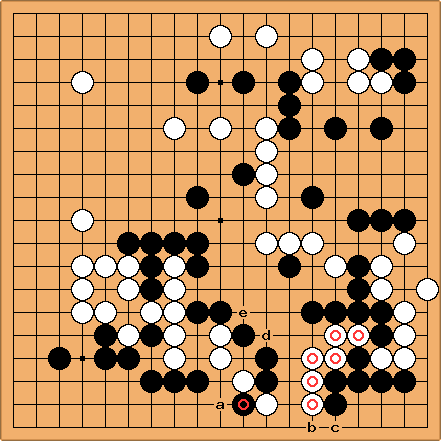 Tderz: Possible starting moves which come up to mind are:
White a, b, c, d and e. 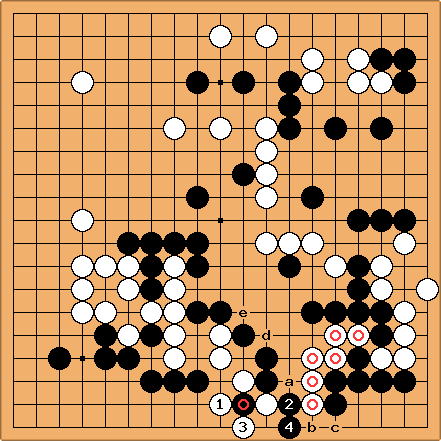 Hence, Whites starts: I see that a and b, are miai, the black corner has more fighting liberties than the 5 (now 4) white dame. Continuing with a looks more promising:
(before screaming, look below [7]-[8]) 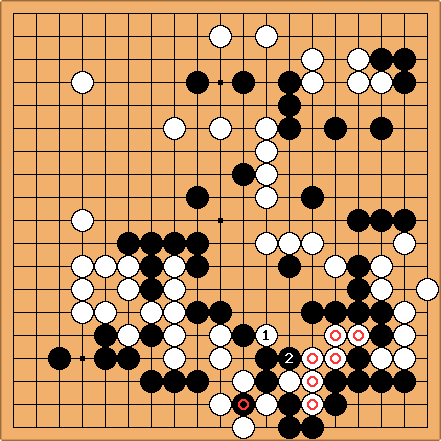 It looks like a miscalculation for Wc, but could be used as large scale attack on the black center group: 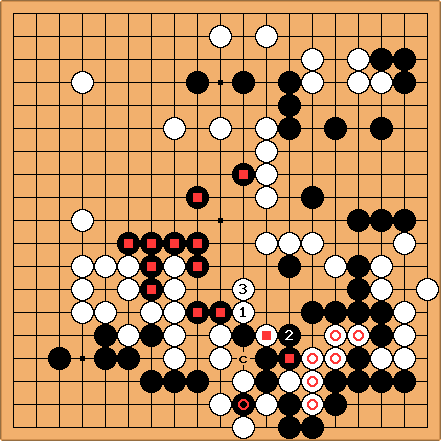 yet White can continue with

or c and separate black's group.
Not a success for Black, got only some white stones

, but center group is cut-off and weak; the lower edge has a bad endgame. 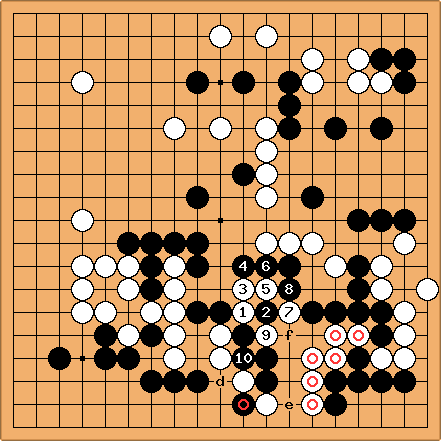 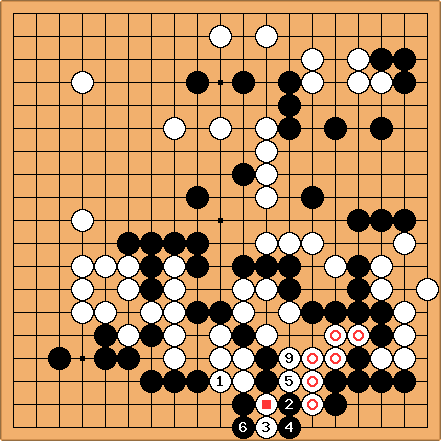 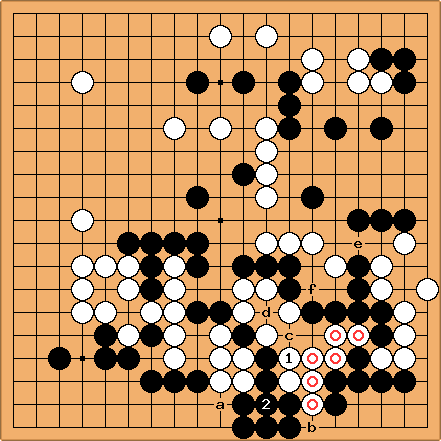 I think ,a is now futile because of b;
and starting with b does not work because of Bc, Wa, Bd and White has damezumari problems.
White e and f are also quite unrelated to the semeai below in this diagram. 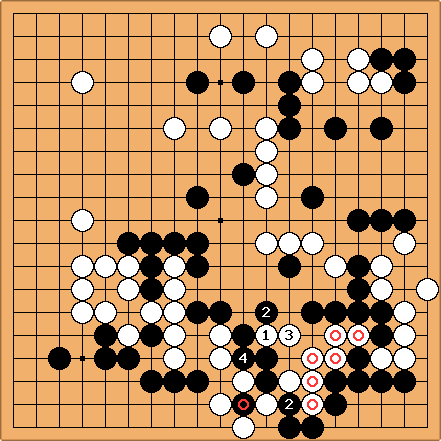 at present dia. 1-3 look best, but comprise an error:

and White has liberty problems. Hence, one could try and leave out the liberty losing exchange 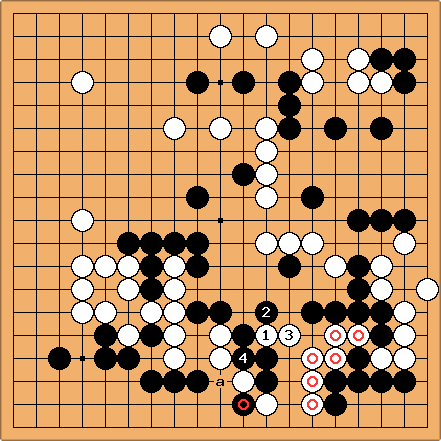 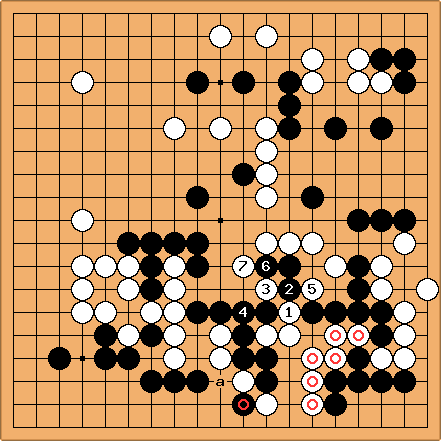 Not responding at a gives White tempo (sente) and avoids losing liberties: 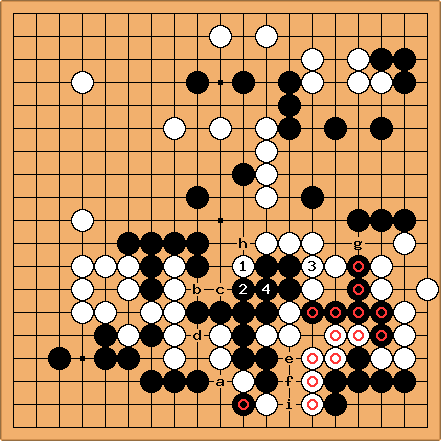 Now White considers playing h or b in order to destroy the eye-shape of the black center group, but that makes no sense as Black can connect at a or play i (if White a). Hence , now coming back safely to White g and capturing the 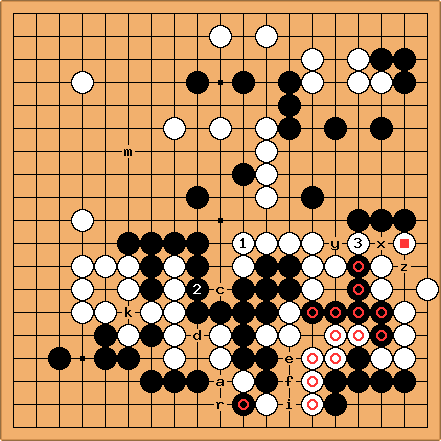 Black must find the right moment to play a or i or perhaps first in the center around m. Black a is big and honte and allows free play afterwards. (Hope I didn't make stupid mistakes here)

It is sente because White a, black r, white i does not attack much Black's center group (having the ko at k, an 1/2 eye at c and space around m).

Is this compromise the most likely outcome? 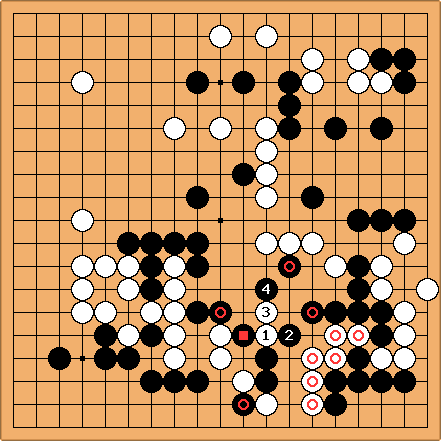 The shape among those

is also very suited for playing

itself is not important helps in the decision to sacrifice it: 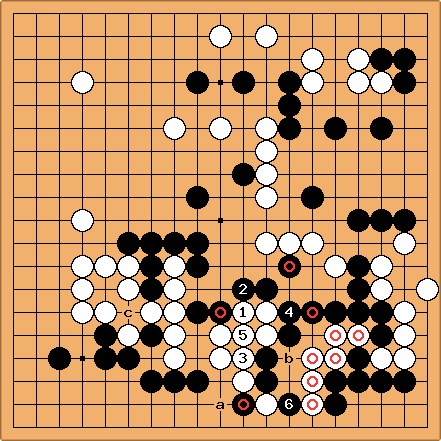 If now White is squeezed

, then Black is connected on top
but the

(not a, because Black would lose 2 stones after white b and the ko at c would only help White).

tells us that White played inefficiently here.
White should look for better options. 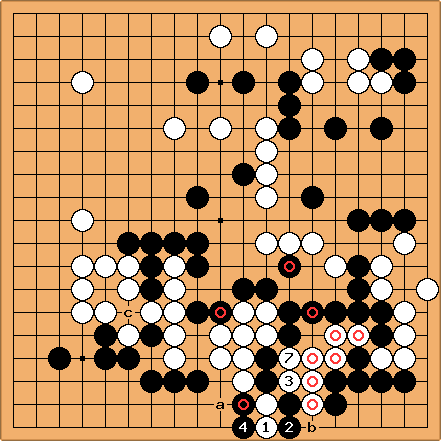 Yet, similar to dias 5-6, White could try again

,
but again would fail after white miai of a and b. 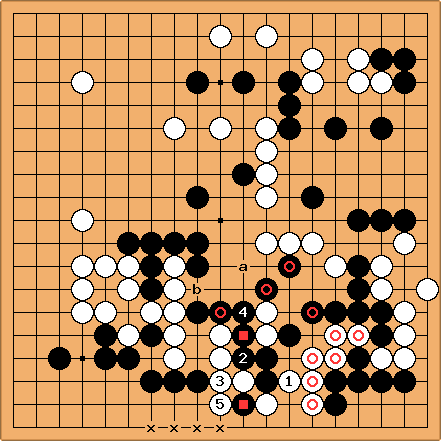 White could compromise with black via

.
This is a likely outcome. Both White and Black have connected their groups.
(if Wa, then Bb) Black will lose territory in the endgame around the x-points

In dia [1] I state something about the corner having more fighting liberties, but after 2nd thought, it does not seem so straightforward: After

, Black must prohibit all connecting options to the left and takes away a liberty with

have 4 liberties left, technically the corner can be killed easily (made nakade, common shape) by

but in exactly how many moves?

and keeping ko a to the last moment 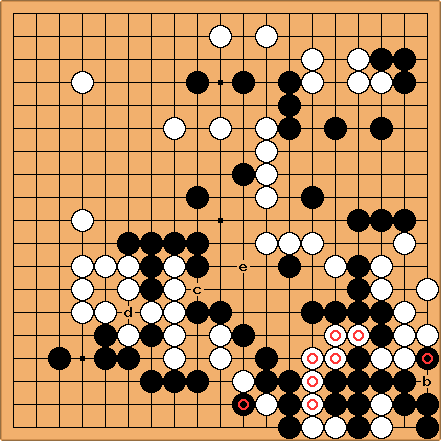 ... after some ko threat by White

... it became real ko against black.

Conclusion, I don't know the answer to this problem? 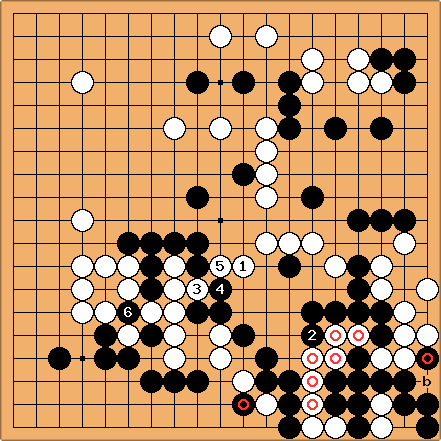 Black neglects the ko threat on the center group, because cutting is Gote for White and Black can start a new ko with

. White will have lost two fights and then perhaps the game.

See Dieter's variant below of this no-risk ko (dia. [24]) for black, starting with the descent at

(perhaps more stylish) and some moves later, eventually resulting in

Dieter: On the Long L-Group page, it is explained that the descent of

can kill Black, if Black prevents the connection. Here, we indeed have to care about White's external liberties.

Although I wrote the relevant section of long L-group, I do not think the liberties allow. --unkx80

It's a two move approach ko for White. But two questions remain in my mind: 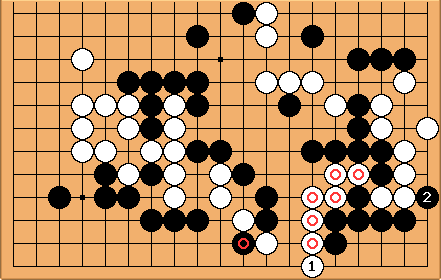 1) How about Black's aggressive answer at 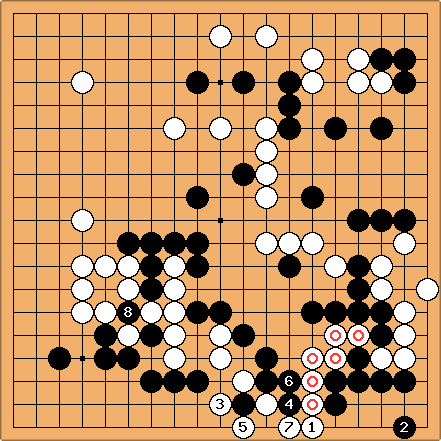 starts a ko on the White group on a large scale. However, White seems to have a lot of internal threats. Still I think that Black may expect more of this than from the two move approach ko mentioned above. 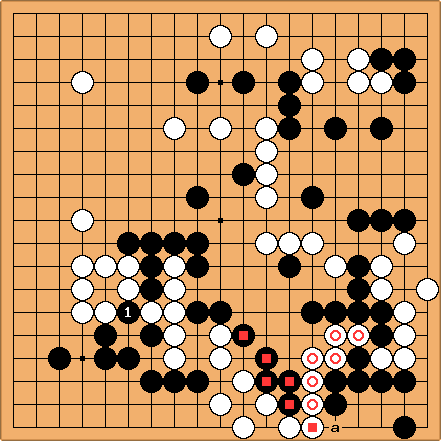 Tderz: reply to Dieter's question 2: ko? First, it seems to me now that Dieter's sagari

is better technique (e.g. having a liberty more at a) than hane+connect, but I will check on this.

does not seem so effective, because the

have lost liberties and are therefore a source of many ko threats - if not more !: 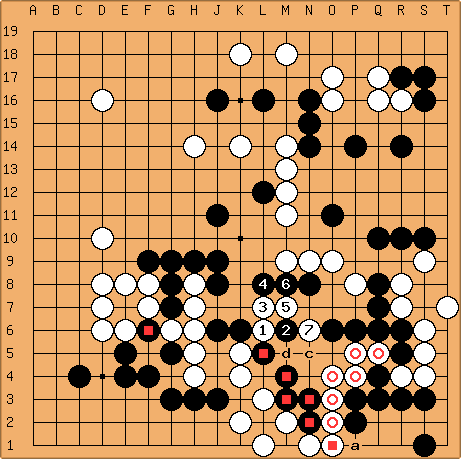 Black hardly wants to sacrifice the Black stone below

.
Besides that any of the previous white moves

could/should have been used for ko at

Black can play c or d, I think it's similar. 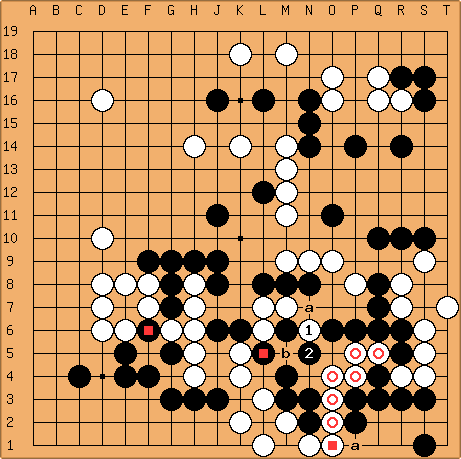 ... afterwards, astonishingly a and b seem to lead to the same (German "Zugumkehrung" = move inversion?) good result for white - notice that this seems better than just double ko. In first instance, I preferred a. 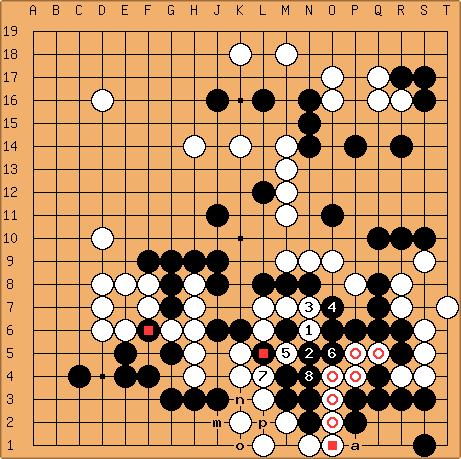 White is already alive after 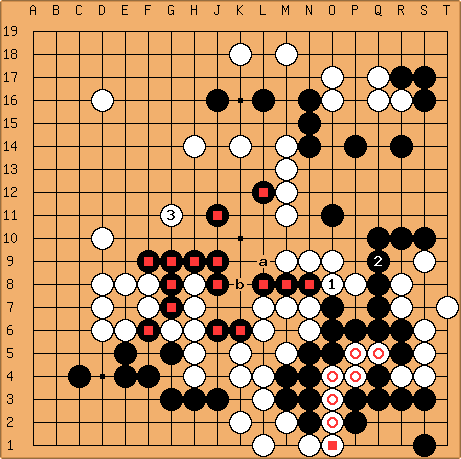 for separating (Black replies, after all it's big), then attack at

. Black would not answer White a at b (the 3 stones are useless now), rather escape making eye-shape around

Are we ready for conclusion? Is unkx's dia [28], the simple sagari-tesuji? making miai of killing the corner or connection the simple & best answer to this problem?
Rich: Ummm... doesn't that diagram show white one liberty short of survival?

here to avoid dia [40]. Black finds this result un-attractive, and might even prefer diagrams [8] to [11], where Black loses 7

(about 16 points, but white could lose

and black keeps the lower edge)), but in sente!

So, is dia [11] best for Black and therefore the fairest, most likely compromise?