The question of whether this corner position is worth 3 points for Black (assuming no ko threats) may be decided, in theory, by a difference game. Having 3 prisoners is equivalent to having 3 points, so for the difference game we can give White 3 black prisoners.

The difference game is played only in the 6 points in question in the corner. By convention, the outer stones are alive.

White has 3 prisoners, Black has 4.

White has 6 prisoners, Black has 4.

Now White has 6 prisoners and Black has 5.

Continuing, White gets the last play, and wins.

White has 4 prisoners, Black has 5.

Now each player has 5 prisoners, with White to play.

Continuing, Black gets the last play, and wins.

Since the second player wins the difference game, it is worth zero, and the corner is equivalent to having 3 white prisoners, i. e., 3 points, as advertised.

Shouldn't that be worth TWO points for black?? 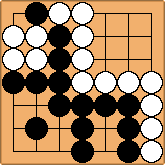 Take this example: Komi is 0, no prisoners, if the left corner is counted as seki, the score is balanced 9-9. Black should capture, and the only white move making sense after that is to cut. 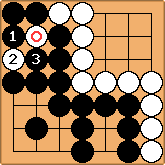 This is how black should continue. Black playing first at 3 leads to a win by just one point. 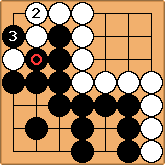 After 3, no side makes extra territory but the prisoner balance is 5-3 for black.

There is nothing black can do to win 3 points. Or is it? (Please correct this if I'm wrong.)

Bill: But if White plays first the result in the corner is 3 points for Black. Each player would prefer for the other to go first. That is why this is an impasse.

It is analogous to a snapback, except that it is more complicated. But as with a snapback, the result differs by one point if either player continues, playing first.

This issue is being discussed on the /Discussion page. :-)

(Minor point: There is a problem with White's carpenter's square shape in the corner that complicates the example.)

Thank you. Now I understand. I believed the corner could not be invaded (so does GnuGo). But now I have tried invading at (2,2). Bad example.

Bildstein: I've been thinking about this a lot today, because I was reading the bit about it in Mathematical Go last night. I'll be talking about this more at some later stage (probably under my homepage), so I'll keep this short. I understand what this page is saying, and the reasoning behind it. I can't vouch for it, but Mathematical Go actually says that the Japanese '89 rules say that both Black and White are dead (in anti seki, although of course they don't use that term), and so there is no territory, much the same as seki. In these rules, Black should actually capture eventually and gain himself two more points. But that's just an aside.

The reason this question is interesting is because no matter what the answer is, the answer seems to be hard to reconcile with the score. I'm not arguing, I'm just wondering if I'm seeing it wrong.

In fact (and this is one of the things I was planning on talking about later), it seems to me that the only analysis consistent with the concept of stones either being alive or dead is that both Black and White are dead. Then (and only then, as I see it), Black will have three points.

This also makes sense from another point of view. Black can capture White. White can capture Black. But if either player captures, so can his capturing stones be captured. Both sets of stones seem to be dead.

I'm not trying to make a point here, although it might seem that I'm managing. I'd love to know what everyone else thinks, or how much of this ground has been covered before. Please feel free to argue with me, or to agree with my reasoning, so simply say what you think without drawing parallels with my rant.

Bildstein: I'll start the discussion, even though at this stage it's with myself. My comment is that it seems to be a coincidence that the rules say three points and it's three points if you consider all five stones to be dead.

Bildstein: Here's another thought. The three-points judgement, at least as presented on this page, seems to rely on an unwritten rule of Go (please feel free to re-phrase to make more correct in terms of application here): "In a contensious position, if it can be proved that the difference between Black playing first and White playing first is -2 points, then the value of the position shall be judged to be the average of the two continuations, without the need for further play". I'd hate to try to explain this rule to someone when I'm teaching them how to play.

Bildstein: And again: What do the rules say about these situations, and what effect does the Torazu Sanmoku ruling have on them:

Bill: This is a snapback.

Bill: At the end of play Black can come to 5 net points by capturing, and that is what the position is worth.

Note: The value of the position is not the average.

Bildstein: Why not? What's the difference between this 6-stone position and the torazu sanmoku position that leads to a different result? If we call this one 6 points for Black, either player would lose a point by playing (by your analysis). In torazu sanmoku, we call it 3 points because either player would lose a point from there by playing. This is another situation where both players want the other to play first, no?

Bill: Well, it certainly makes sense to split the difference. However, we do not do that in other situations. For instance, we count a seki as zero, even if one player would lose more by breaking the impasse. The basic philosophy for impasses is to score close to zero. The idea with torazu sanmoku (which I think was behind Shuwa's ruling) is not to split the difference, but to treat it like capturing dead stones. Take the snapback, for example.

If Black plays first without compensation, the result is +4.

If White plays first, the net result is +5.

By territory scoring, we allow Black to score 5 points without capturing the White stones. If we played it out, with Black playing first, but giving Black compensation for the extra play, we would get the same result. We do not play it out by Japanese rules. Still, the result is the same as if we had, under those conditions.

By the same token, if we played torazu sanmoku out (assuming no ko threats), with Black playing first, Black would net 2 points but make one more move than White. When we give Black compensation for that move, the result is 3 points. Voila!