Board and starting position: 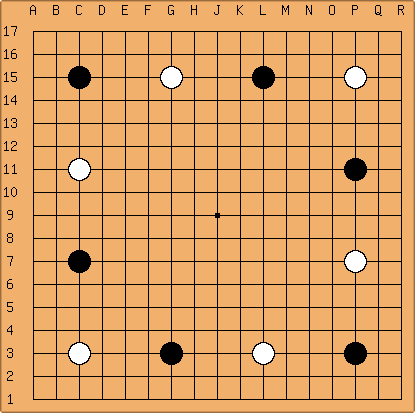 The board is a 17 by 17 grid (2 less than the normal size now) and has a fixed opening pattern as shown here.

The ko rule was: may not play a stone on an intersection where the opponent has just removed a stone.

Note that this makes snapback illegal and suicide useless as a ko threat.

There has been some conflict over whether or not moves must actually be made within 2 spaces of a previous move. It is probably correct to say that is a mistaken opinion, formed from watching people respond locally to their opponents moves.

Another rule in this category is that losing both of your starting corners (the 1-1 point nearest to your own 3-3 starting stone) if the opponent keeps both of theirs is a -20 penalty, and the center point is a 5 point bonus.

This article did not mention if area or territory scoring is used.

John F. The latest state of play is on GoGoD's New In Go site (

http://www.gogod.co.uk/NewInGo/NewInGo.htm). It seems as if the extra rules described by Peter and Andre are either wrong or not mainstream. Personally I suspect they relate to a variant within Tibet. But current mig-mang rules are now quite clear (see NIG).

There are exciting times ahead. There was a Tibetan seminar at Oxford University in 2003. Dralha Dawa Sangpo gave a report on the ancient stone board discovered in Lhasa" He said, "In 1990, Sonam Chogyal, researcher from the Tibet Academy of Social Sciences, translated two English articles which are Go in the Snowland by Peter Shotwell and Study on the Tibetan Chess by John Fairbairn, respectively. These two translated articles influenced scholars in Tibet to pay attention to Tibetan chess, and as a matter of fact, now there are already several scholars who engage with studies of the Tibetan chess and published numbers of articles"

We await details, but apparently Brill have undertaken to publish the proceedings. In the meantime, more details on the GoGoD CD.

John F. Update, 2010-09. The proceedings did eventually appear, but without the go article. 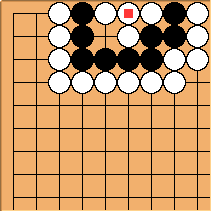 Nick George:Does this than live or die according to sente?

IanDavis: This is the equivalent of a ko fight for life I think. If White's next move is small enough and can be ignored, Black can play at the marked point.

Leira: Also notice that a further ko must be played when white tries to kill (because they must first reduce it to a 3 spaced eye).

Sandra: Whaaa? If white playes SW of the marked point black will have no liberties. So white (to play) can capture and black (to play) can live if it ignores one threat elsewhere. 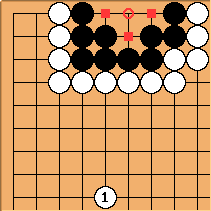 IanDavis: This is a ko fight Sandra, Black can live with a play at the Circled point, but White could play there to kill. Unfortunately White needs to make a ko threat before he can play there.

Sandra: Right, just as I said: Black, if it was blacks turn to play, can live if black ignores one threat elsewhere. But the confusion was that WHITE can kill immediately as far as I understand, simply by just capturing all of the black stones before any of the white stones were captured. If it was whites turn to play. 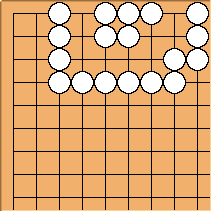 Sandra again: Oh, now I see what Leira meant. Sure, white needs to win two ko threats in order to kill, if and only if black does capture the first white stones. But I thought you were talking about the situation in the original diagram. If white is to play there its no ko fight.