The third line capture is one of the basic edge patterns. This pattern is also known as the cathedral.

is crucial because we're high on the third line, cf. second line capture.

would be a deadly double threat, putting Black in atari, and threatening a second line capture on

at the same time. Therefore

is crucial, without which

would be a mistake.

does not work if

Charles Matthews Well, the idea that this second way to capture is better is certainly debatable. The basic principle choose the firmer capture does suggest that the first way shown, reducing White to two liberties, should be the default. Dieter agrees.
Velobici: If memory serves, Kageyama admonishes the reader to use the surer method of capture when comparing nets and ladders in Lessons in the Fundamentals of Go.

Bill: I would have thought that the solid connection was the firmer capture. And, in general, better. when it works. Here, though, you have the question of White's kikashi, both on top and, more particularly, to the left. I still think that the solid connection is better on the otherwise empty board, but it's not an easy question. (I think that the difficulty level is rather above that of Beginner.) 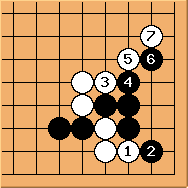 If it's a question of comparing forcing moves left after the capture, White has these in the second case. 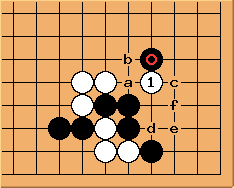 still give White all the options, e.g.
after the usual stylish Black c, White d, OR

Bill: Excellent! However, you have moved the stones two points to the left, away from the right edge. ;) 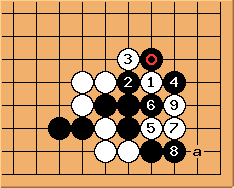 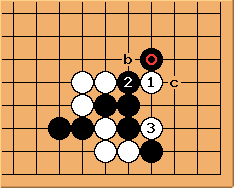 , White could go for sure and play immediately cut 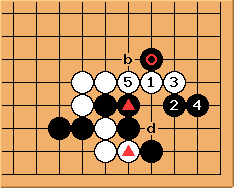 is very bad for Black, as the stone

is cut-off without compensation.
The cause for this is 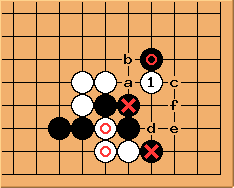 tderz: the question arises, which then is the honte (proper move)?
If Black e, then White f.
It feels as if only a tighter grip early on the two

... Not to mention the possibility of escape at 4 at some later point.

JoelR: I'm unclear; is the corner there or not? If so, then compare to BeginnerExercise167, as below. If not, then how much can White flail by playing

Bill: Both before and after reading this page, I confess I have no idea what cathedral is. 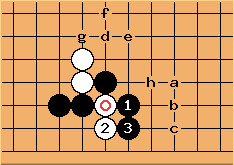 unkx80: I am guilty of producing such a lousy original diagram, but I did not invent any name, I simply put it as "capturing on the third line". The pattern applies anywhere along the edge, and any White stones at a, b or c does not affect the outcome of the capture.

Alex: On the other hand, beginners should be warned that a stone at d renders this line of play a disaster for Black, while one at e, f, g or h can lead to a ladder. Anyway, this page is in dire need of a WME.

Dieter: ... and I'll take responsibility for the chapel term but didn't extend it to cathedral. Now, will the real culprit rise please ? (You'll see it's the butler).

[1] Calvin: In his frequent lectures at the US Go Congress, Maeda Ryo introduces the following other pattens in his elementary lectures. These are patterns he suggests that all players just know rather than waste time reading out. In each case, the presence of the black helper move assists black in capturing the stones by being able to play

. Therefore if it is possible to play any of the marked stones as a threat, the threat of capturing the white stone becomes a secordary threat, so this is useful in fighting. As for how they are useful, well, one should attend his lectures... :-)