This discussion is a spinoff from the basic edge patterns page.

I want to propose a new kind of basic edge pattern 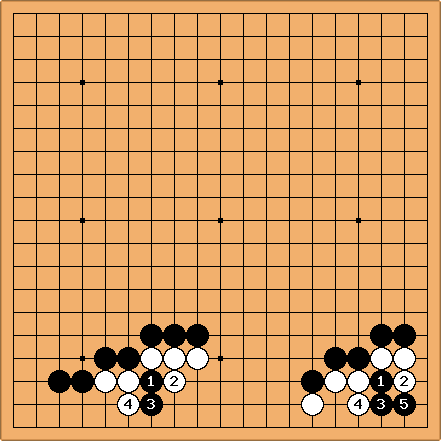 The one on the left is a mistake of course, but still, in my opinion, fits the term "basic edge pattern", I.E. to know that one shoud block at 3 instead of at 2.

The one on the right is also a kind of edge pattern, also a mistake. i.e. should have blocked at 5 instead of 4.

Jan: I guess the last one could be called the Cathedral...
Stefan: good one :-)

Dieter shoots off with what he usually calls the Chapel, but realized later that Chapels are a western/christian icon and as such not a very respectful choice for a universally known shape.

Bill Spight: How about the Guillotine?
A respectful choice. ;-)

Jan: I'm sure some French royalists are going to get upset about that one. How about Altar, House of Worship or maybe just the House? The lengths one has to go to to keep the political correctness police at bay... (The sake bottle is negative is a negative statement about Japanese culture: whoever came up with that one - off with his head! :-)

imagineero?: 'House' is yet another term that has already found claim somewhere in the world; in Korea where Go is called 'baduk' eyes and even territory are universally referred to as 'houses'.

Evpsych: I also prefer non-religious names. To me, capturing a stone on the second line looks like a Hat, a Circumflex, a Caret, a Roof, or a SingleStoneEdgeCapture?.

Caret is maybe the best of these.

Slarty: The newest pattern might be called the Banana Peel