A tesuji somewhat related to maido: 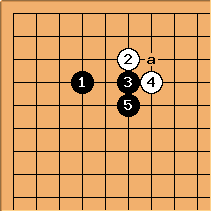 This is a shape that occurs in a common joseki. As players of reasonable strength should be able to see, white needs to protect the cutting point at a. 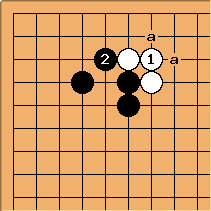 However, if white plays

above, black takes an excellent shape point, creatig a crocodile's mouth, and white cannot be satisfied. The same will occur if white protects the cutting point with either of the tiger's mouth plays (marked a). White must use maido to gain a good result. is the joseki move. As you can see, after the exchange

in the fourth example in the killing-moves diagram below.

Here we see a generic side situation. Since it is black's turn, the marked stone is saved easily. For white to capture black, she must place a stone that interferes with the process by which black escapes.

As you can see above, all of the marked white stones kill black. There are many such combinations; these are just a few examples.

Imagist: I'm not actually sure what Maido is, beyond the explanation above. I was taught it by a dan player at a go tournament, but I never got a real definition from him. From his explanation, it seemed like it could be: 1) capturing by understanding the process of an escape from that capture or 2) various moves that work for the same purpose. If anybody knows more, please add to this!

togo: I did a bit research with dictionaries, wikipedia and some googling: The maido/maiden/maidono (舞殿) is a small pavillion in shinto shrines, where weddings, dances and music are performed. It can also be called kagura hall (神楽殿), referring to its original use. Often it is a very prominent roof standing on non-prominent beams. The connection to Go is probably the characteristic triangular shape of its roof hovering above the ground.

On the funny side, at real-life maido there often is an extension (probably added later) which could be referred to this killing extension in Go.