Thick plays in the endgame

These occur in the early endgame[1].

Example given by Bill Spight, moved here from WhatWasTheHighestMoveNumber (now thickness versus endgame).

In Ishi no Kazoekata (How to Count), Sakata says that simply making plays based on counting territory is not enough. You also have to play thick yose.

Thick yose are plays that aim at aji. Even though they don't look big, later on they make a profit. For instance, if a ko breaks out later, thick yose generate ko threats.
Sakata gives the following example.

Iago: this game can be found in gobase at 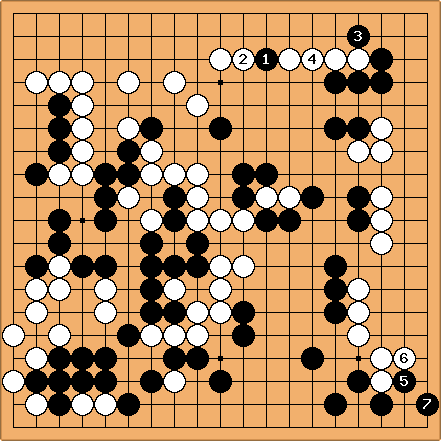 Black was Fujisawa Hideyuki, White was Sakata Eio. Black seems to be lagging, and makes a shobute with

Having made his kikashi on the top, Fujisawa switches to the large yose in the bottom right. 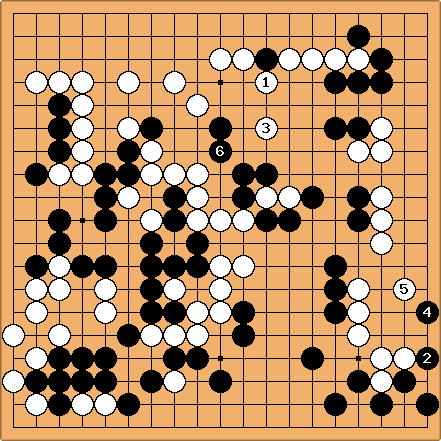 is a thick yose. Sakata preferred it to

, protecting his territory in the bottom right.

eliminates some black aji in the top and makes

sente. In return, White allows Black to penetrate deeply into his territory in the bottom right. 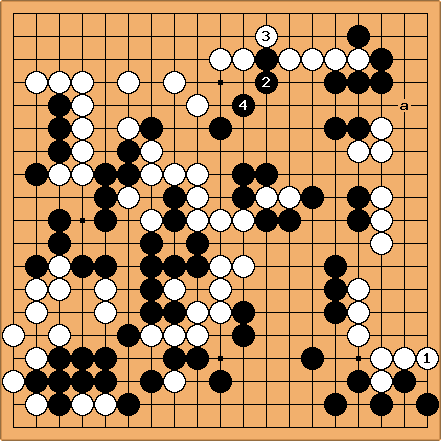 Jared: I would play

here without hesitation, and this page hasn't really convinced me otherwise. I guess I just don't see what is Sakata afraid of?

Dave: Unfortunately Sakata does not give any examples of play on the upper side if he answers in the lower right. However, note that Black can choose something like

to expand the center. As far as the right side is concerned, he clearly states that ending in gote in the lower right is unsatisfactory because there is the large question in the upper right about whether Black or White gets to play at a. 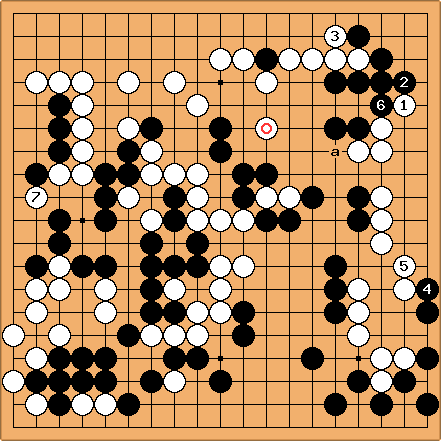 . Now the marked stone comes into its own. A White push at a cuts Black's corner off from the center while threatening to pull out the two captured White stones. Black answers in the upper right but that leaves White with sente again so he was able to play

. This does not capture any stones because of the weakness of White's lower left corner (how to save Black's stones is left as an exercise for the reader :-) but it reduces the points that Black makes here.

[1] Bill: Well, this example is from the middle endgame. ;-) Obviously, such plays cannot occur in the late endgame, after the board has divided up into small, independent regions.