Hi, I like this information a lot. But I have problems to understand all (7k). So if anyone can refer to examples or can add some it would be very nice. (maybe a good/bad framework with the ideas where thickness II can be used or not,...) lg emk

Charles Vision attacking play 3 I think is interesting in this context. The examples at consolidating frameworks too.

I have renamed and edited the old WhatWasTheHighestMoveNumber page. Now see thickness versus endgame and thick plays in the endgame.

The number of technical pages here at SL marked with both MiddleGame and Strategy keywords is about 30.

BobMcGuigan: When asked which side is ahead in a game, pros often say something like "White is thick". From the discussion above I suppose they are referring to thickness II.

Charles Yes, I think that's probably the major point here - to have Thickness II may exclude your opponent from having the same (well, there are a few very odd pro games with both sides very thick). It can be like 'a won game'. If you are strong, that is.

JF It is usually a bit of a mistranslation to say "W is thick" in these cases. "W is thicker" is more correct - all Japanese adjectives imply a comparative within them and omitting the -er is one of the commonest mistranslations at all levels (we see it in go a lot with the word omoshiroi). The book on thickness for 5-dans which I once reviewed on r.g.g. - comments reproduced on SL without permission, incidentally - is more explicit. It says the term is a relatively recent one, a product of shorter time limits, which means that it is no longer possible to read out all the endgame moves. The term (it says) means the same as jigo-ichi, i.e. it's more or less level but X may be a point ahead.

In a sense, therefore, this use of atsui is nothing to do with thickness as discussed here. although it's probably true to say that someone with a thicker/solider/tighter position is more likely to edge ahead.

BTW, having now read the above book fully, I'd rate it higher than I did before, and since I learned a lot from it, it follows that several of the comments I made in the review I would now modify (one good reason for not lifting it without permission).

Charles: I can't see the relevance of the biochemical cycle. I can't even see a cycle of any kind. What am I missing?

Third point: in the latest Go World (Japanese) I've just picked up today, there is a very good comment in an exceptionally good series by Kobayashi Satoru (on thickness and overconcentration). He mentions a move that "seems thick" (Black 1 below) but says it is not one he'd approve because it has the feeling of Black being kikashi-ed. (I'll leave the correct move as an exercise forn the reader). It appears therefore that a good criterion for those thick quiet moves that we rarely play (but if we do we feel smug for a week), typically connections or other honte, is that they have be played totally willingly They can be defensive in the sense of mamoru - prophylactic defence -but not in the sense of ukeru (responding) as Black does here. 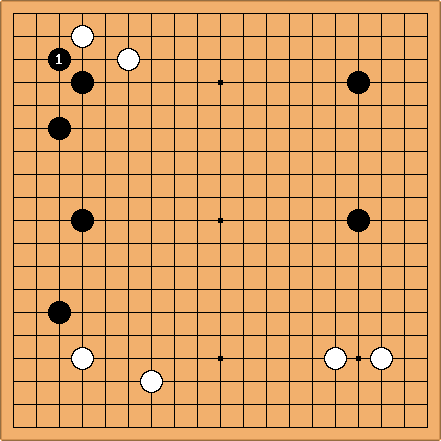 Charles Well, if the goalposts are ever-moving, I should pass on the linguistic side, clearly. I welcome any metaphor that helps articulate what is going on, without recourse to discussions of how the Japanese or other pros put it (I'm not competent to be scholarly in this area). So I'll just defend the 'cycle' theme a bit: I'd say that thickness does breed thickness to some extent. If I played more thickly myself I might think otherwise, but it's not my style.

By the way, it is clearly annoying to John to have his rec.games.go postings up here without permission. I was under the impression that care was taken here on SL that such things didn't go on.

Stefan: I apologize, being the one responsible for the original reproduction of the material. At the time I believed this was in line with the 'fair use' guidelines mentioned in the copyright-related links on SLCopyright (a page which, to make matters more complicated, has been changed and amended in the mean time). To avoid all ambiguity I have removed the material from this site and replaced it with a link to the original postings (well, to an archived version). With my apologies to John.

Ian: Note the link is now broken :) I wonder if it would be useful to have some people go through the various pages and make a note of what they don't understand. Wouldn't that help in the editing process?