-Stefan: I am a chicken. And a weak one, for that matter. I have made some thickness in my life, but I don't think I ever believed that after move 50 or so it could still be useful to build some. I think I must always have gone for territory after move 50.

What Sensei prefers thickness over the 5 point gote endgame play?

It may just be the Toulouse style of play, but I often (and see other do it, too) build thickness in the Chuban whilst attacking/pressing groups, so that I can later invade or attack somewhere else. I have never really counted the move number, but I would definitely say that at mid-Chuban it's still not that rare. That makes it around move 120?

Which reminds me of another question: when does the endgame start ? In many professional games, this is often as soon as move number 100.

If 5 point gote is the largest available yose move, I won't think of that other move as being thickness. I'm afraid this is an idle discussion as long as no examples are supplied. Dig into your databases, senseis !

--- - BillSpight: Using deiri counting, if a 5-point yose is the largest play, there probably are not any thick plays left, as Dieter says. But there are plenty of thick plays among the large yose. (Example moved to thick plays in the endgame.)

HolIgor: I believe what Stefan meant was trading points for the outward influence, not the thickness. Otherwise, it is common to secure life or connections very late in the game. (--Stefan: You're right, I didn't properly absorb Sensei's lesson on Thickness vs Influence yet. Back to your books, son!)

It seems to me that a usual dilemma of territory against influence may happen very late in the game. Consider, for example this situation: 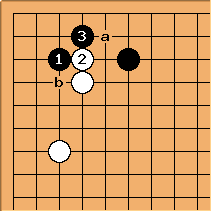 But if in the opening the choice reflects your style, at move 100 you'll know quite well what is more important to you. One of the factors is that the corner is gone anyway, the problem is if you agree to give a little more there but be able to help your stones on the top, for example.

But usually by the move 50 I reduce or survive.

DieterVerhofstadt on HolIgor's comments: HolIgor, maybe the others understand what you are saying, but I am really at a loss. No criticism intended, it's just plain failure of understanding on my behalf.