The genius of the greatest blunderer

As BobMcGuigan pointed out, Fujisawa Shuko, one of the greatest players of the last century, although talented, brilliant and creative, was also cursed with a fatal tendency to make terrible Blunders.
In his younger days he used to say that if he were allowed to take back a move every now and then he would be the strongest player in Japan... which he became later, in his fifties, when he held the Kisei title for six straight years since its inception.

The diagram below shows one of his Pokas: it is his game against Nie Weiping (Black) in the semifinals of the first Ing Cup (1988).

lost one point: by pros' standards this was a silly mistake. Alas, Shuko went on and only four moves later made another one-point mistake: Nie thus won this game by half a point...

White should have first descended at

in the diagram below, forcing Black to add a stone at

To compensate for having shown Shuko's mistakes, I will also show two of his incredible brilliancies...
Both are from the defence of his 4th Kisei title against Rin (1980): the diagram below is the first game. Shuko is Black: an unusual variation of the Taisha happened in the upper left corner and Shuko let the incredible

fly... Rin had to answer passively at 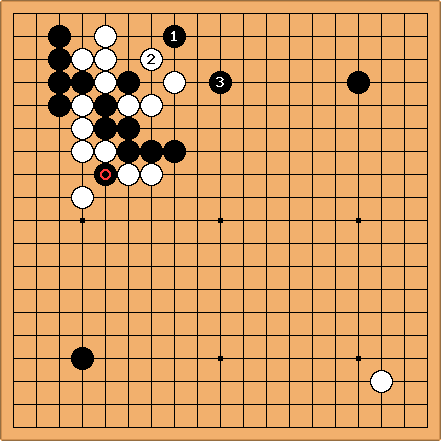 The pro following the game, Kudo Norio 9d, the Yomiuri commentator, and Yamabe Toshiro 9d, the referee, were astonished and said that "an ordinary 9d would only think of setting

in motion"...
White had to answer passively: a more determined answer as

in the diagram below was exactly what Black was hoping for. He sacrifices one stone and shuts White in. 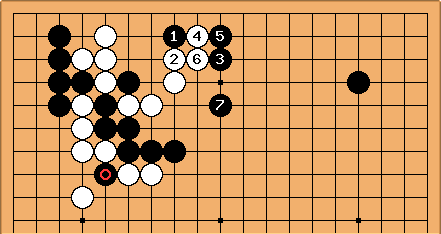 Another brilliancy came in the fifth game: Shuko is again Black and came up with an unorthodox attack at 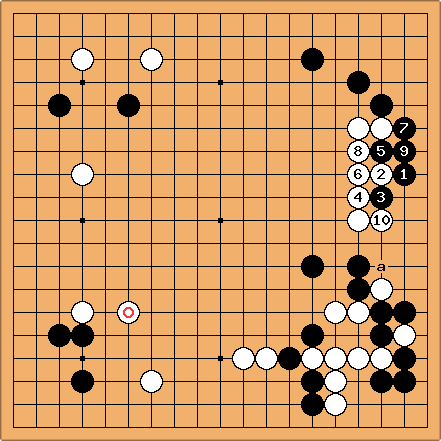 because he wanted Sente to play first on the left side. In the ensuing fight White fixed his position there, but Black captured

in a ponnuki. This, and the territory Black got on the right side put him in the lead.

Shuko commented that no one else could play such a move. A few days later he interrupted his celebrating (i.e. drinking) over the successful defense of the title to say in a TV interview: "Dosaku and Shusaku, Sakata and Takagawa could all get together and think about it - they'd never come up with this move!"