BillSpight: I think that the most important strategic concept is that of miai. Recognizing what areas of the board are miai helps to focus on what is important.

One can carry that too far, I suppose. Else tengen would be the best initial play. ;-)

Holigor: reacting to your wink I will have to say that tengen used to be the best initial play before komi. Komi introduces a breaking of symmetry and Black has to work hard to get those 6 points out his sente at the beginning of the game.

Stefan wants to understand what Bill means by that. Do you mean that if you find an area that is not miai with anything else, it is important to play there?

Bill: That's what I meant by carrying the notion too far. :-)

If two areas are strictly miai, independent and equal, then you can ignore them (except for ko considerations). On the open board every point except tengen is equal to its symmetric point, but not independent.

If two areas are miai, but not strictly miai, in general your gain from playing in one while your opponent plays in the other is small. Often your best play is elsewhere.

One strategic aim is to leave your opponent with overall miai, so that his gain will be small. Starting on tengen does that, but its own gain is problematical.

On an otherwise empty board the top right and top left are equal. But White 1 raises the local temperature. Black 2 is a hotter play than White 1.

By the way, Black 2 is maybe not so good, in general, since it leaves White a big play at a. The idea of miai is to trade equal or nearly equal plays. After White 1, Black would like to get tedomari, as a rule. For instance:

Holigor: Playing 6 here is something that does not usually come to my mind. I would make an ikkentobi over 2, because the competition of who is ahead at the border of two territories has started already. It seems that 6 is living small and low. But, I am notorious for thin plays.

Bill: The jump to a does not carry much of a threat against White's right hand group, which is fairly solid. In addition, it is a bit thin. Black 6, while perhaps slow, aims at White's left hand group.
If you're going to jump to a, better not play at 4 first. That's aji keshi, strengthening White's group.
But maybe Black has something better. :-)

Black 1 and so on build up strength to go with his wariuchi stone (marked), and keeps sente besides.
But White is too passive, here, don't you think?

White can mix things up, but his two stones look kind of lonely.

Maybe the kogeima is not so good in this situation. How's this?

(There are several possibilities for Black 4, of course, including tenuki.)

In any event, the fact that the two sides are not independent should be clear. :-)

DaveSigaty: A little clarification of the position here. What is under discussion is very rare in actual play for a couple of reasons. 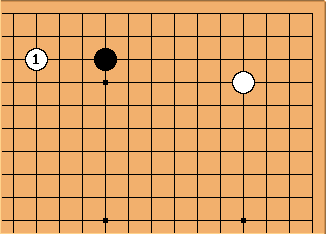 It is rare for White to hold back to

when extending from a White position in the upper left (whether a 4-4 stone or a shimari. Instead... 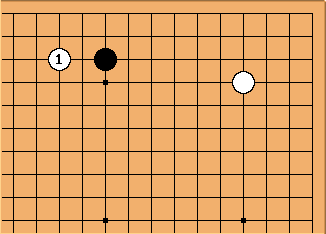 White normally plays all the way up to 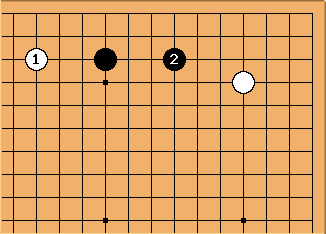 When White holds back, most often Black does as well - with the 2-space extension here. 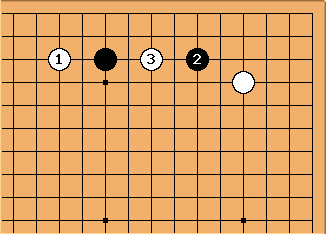 Against the closer approach, Black uses

about 60% of the time. In reply White usually invades at

. Consider these alternatives when thinking about what Bill is saying. They illustrate the chances that White has let slip to prevent Black from building a nice shape while forcing White.