Bill: In the commentary I often refer to the official Japanese rules. When I say these rules, however, I mean mine.

Bill: This is Diagram 9 of the official Japanese commentary. If left until the game under the Japanese '89 rules this ko is an antiseki. Both White's single stone and Black's corner group are dead. (It is unclear why both players do not lose by Article 13.)

Under these rules if this is left until the encore, the first player in the encore has the advantage, as the encore starts with no ko ban. Suppose that during the play Black has just taken this ko and White has passed. If now Black passes, White can start the encore by taking and winning the ko. Black cannot take the ko back without a pass, and if he passes White will simply win the ko.

Exir: Hmmm... Why does white start?

Bill: This is Diagram 10 of the Japanese commentary. If left until the end of the game under Japanese '89 rules the single White stone is dead, and Black's local score is 5 points.

These rules get the same result in the encore. Suppose that White plays first.

Black wins the ko for a net local score of 5 points.

passes for the same ko that White took before. Because the position of the whole board has changed, White can take it back.

Bill: This is Diagram 11 of the official commentary. It illustrates how a double ko seki does not provide ko threats for the approach ko in hypothetical play. The same goes for the encore.

cannot take that ko now, because of the once only rule. White took that ko before in the same position of whole board.

Bill: While this may have become a triple ko during the play,

is simply dead in the encore.

N. B.: The Japanese commentary overlooks a problem with double ko seki in the hypothetical play. It has 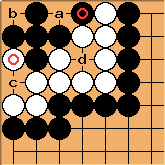 Bill: This is Diagram 14 of the official commentary. It illustrates how to determine that it is a seki at the end of the game.

each belong to its own seki group, because each has only one liberty. The other Black stones in the corner belong to the

group because with it they surround the same eye point (a). Similarly, the other White stones belong to the same seki group with 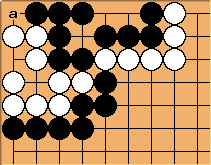 Bill: This is Diagram 15 of the official commentary. It illustrates how this position could be deemed a seki at the end of the game.

To get credit for his extra point of territory, Black should make sure that a is filled before the game ends. In fact, it should probably be filled before the encore. The first player in the encore may be able to gain one point by playing at a and then getting a pass stone from the opponent.

In general, neutral points that can safely be filled should be filled before the encore.

N. B.: Black may not want to play at a before the encore because doing so gives White a ko threat that is too large, and that might allow White to play a ko such as an approach ko. White can play at a to make a slightly smaller threat. Under the Japanese rules that may lead the players to leave this as a strange seki. Under these rules White may leave a unfilled during the play if she will start the encore, but, because ko threats do not matter during the encore, a will be filled then. OC, such an eventuality may be considered anomalous under both sets of rules.

Bill: This is Diagram 17 of the official commentary. If this position is left until the end of the game by Japanese rules, the local score is 0, even though the

stones are dead, because they are in a seki.

The same is true with these rules. However, in the encore White can still score some points by capturing the

Bill: White gets 3 points for the captured Black stones plus 1 point for the pass stone.

Bill: However, in the end White must give compensation for the two seki stones (

If White plays the same way before the encore White scores 3 points for the captured stones. The same holds true under the Japanese '89 rules.

Note: It would be preferable if play in the encore netted White 3 points, the same as play before the encore. It would be even better if the official Japanese rules scored this position as 4 points for White.

Suppose that the play ends with two passes, White passing first. Both players are beginners, and White thinks that her stones here are alive, while Black thinks that they are dead. White pauses play and indicates some dead White stones, but does not say that these stones are dead. Black realizes the disagreement, but simply asks that the encore start. White may still protect these stones, but cannot be sure that they are the stones in question.

By contrast, suppose that White had to indicate which of Black's stones she thought were dead. She does so, and then Black indicates that he thinks that these White stones are dead. White then starts the encore and protects these stones.

Bill: This is the Life and Death example #1 in the official commentary. It is also the traditional position called 3 points without capturing, which was the ruling by Honinbo Shuwa.

Under the Japanese '89 rules if this is left until the end of the game it is seki, so White should play this out for a local score of 2 points.

Bill: Under these rules this would also be a seki at the end of the game if left unplayed. But White can play it out in the encore. White starts by capturing Black's stones.

captures White's stones, but White has an under the stones play at

can make a ko, but Black cannot fight it during the encore.

Totaling up all the prisoners, White gets a net local score of 3 points, the same as under the traditional ruling.

Bill: This is Life and Death example 7-1 in the official commentary. It is a situation traditionally known as bent four in the corner. The White stones are traditionally considered to be dead. That is true for both the Japanese rules and these rules.

Bill: In the encore

puts the White stones in atari, but

prevents White from making a second eye, but

throws in to make a ko. Black takes and wins the ko.

Bent Four is almost always dead under area scoring, as well, since Black can eliminate White's ko threats without cost, except for unremovable ko threats, which are rare.

Bill: This is Life and Death example 7-2 in the official commentary. The bent four is still dead under these rules.

in addition to the pass stone, so the result is one point worse for White than if she had filled at

passes for, Black will win. So Black can win both kos.

Bill: Because of the potential to form multiple kos, it was possible for Bent Four to live under the first version of these rules, even with correct play, because in that version a pass lifted all ko bans. 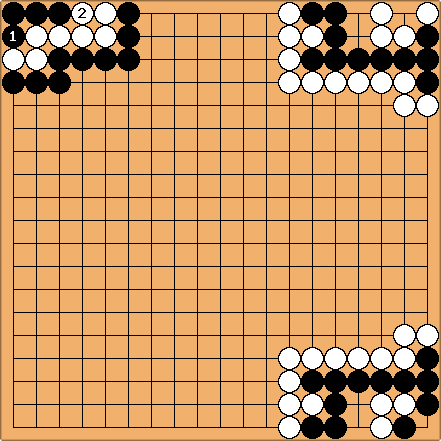 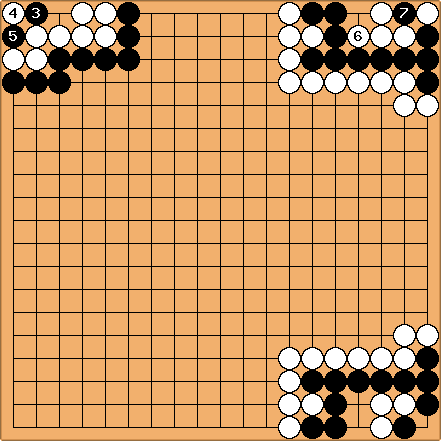 Bill: Since all ko threats are lifted, White must win one of the kos. 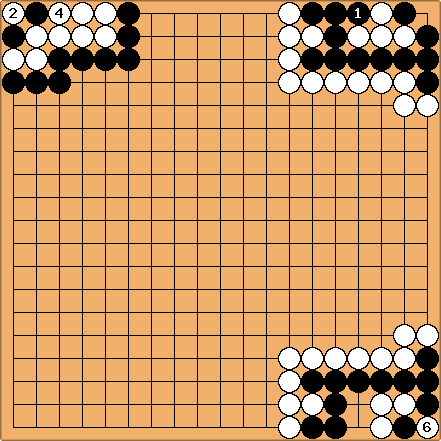 Bill: Black has 7 prisoners, White has 9, including pass stones. White must give up another prisoner for the seki stone at

By the Japanese rules, the Bent Four is dead, and the two 10,000 year kos remain sekis. The net local score is +16. This difference of 14 points tells me that these rules are not a good enough model of the Japanese rules. It looks like the pass for specific ko rule must be retained, and its problems addressed in another way.

(Later): With the pass for ko rule retained,

cannot pass for both kos, and Black can win both.

Bill: This is Life and Death example 8 in the official commentary. The Black group is dead.

Suppose that Black plays first in the encore.

Bill: Black can engage in delaying tactics, but finally must yield. By the once only rule he cannot take the

because he took it before in the same position.

Bill: This is Life and Death example 13 in the official commentary. I shall use it to illustrate ending the game without agreement. Black plays first in the encore.

Bill: Instead of passing or seeking agreement, Black tries to initiate an infinite cycle with

. Because of pass stones, White cannot eventually give up the corner because she has accumulated enough prisoners.

ends the round, because White passed here earlier in the round (

ends the round in the same position that a previous round ended. End of game.

, a seki stone played in the encore.

Bill: This is Life and Death example 16 in the official commentary. (Thanks to Harleqin for bringing this example to our attention. :-) As he points out, the commentary says that the White groups are dead, but the hypothetical play leads to an infinite cycle in the double ko.)

Bill: As above, because of the once only rule,

cannot take the double ko, even though

), because White has already taken that ko in the same position of the whole board.

, it is only a matter of time before Black can capture the rest of White's stones. The false double ko seki has collapsed.

N. B.: The once only rule cannot simply refer to a particular ko shape. Otherwise Black could not take either ko back and capture White's remaining stones when the false seki collapses.