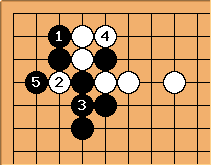 Black has to come back and protect the corner with

is sente no gote.

Alex: The correct move, presumably, is

, since it actually is (probably) sente, because it makes a black move at

unkx80: Now, would the Japanese call Alex's suggestion of

as gote no sente?

Bill: At least some would. I do not think that these two terms can be formalized. They will always be open to interpretation.

Velobici: Boink! What is different about these two terms that they can not be formalized or is this a problem shared by many/all terms. Perhaps I dont understand formalized?

Velobici: It seems that formalized means expressable in the rules of the game or via an algorithm (ordered set of operations to be performed to capture the group). Hanami ko introduces the idea of the value (countable) of the two possible ko outcomes, with hanami ko being characterized by the highly unequal value of the two possible outcomes. Perhaps this needs to be limited to no more than 2 points for the favored side or perhaps a 10:1 ratio between the two outcomes....dont know, not sure that it matters compared to the importance of the concept of highly unequal outcomes. So hanami ko may not be formalizable as a single rule or test criterion.

. We can count the result of Black playing at

vs Black playing at

. If the loss for playing

is greater than the gain of Black playing

, we can call it sente no gote, whereas Black playing

is local sente. Game-wide or whole-board sente would depend on the value of gain of Black playing

vs playing elsewhere on the board. Thoughts ?

carries a large threat, but Black must reply to

, ending in gote. If we simply consider points, this is like sente no gote. But it is not. Why not?

I would say, because it is not a mistake. But even if all sente no gote are mistakes, how can we reliably tell the difference between a correct reversal and sente no gote?

Gote no sente is even harder. As Bob Myers points out, why don't we just call it sente?

And, BTW, I think you are describing a lopsided ko rather than a hanami ko.