Note that there is a similar discussion here: Question About Japanese Scoring.

As a beginner, mostly playing with other beginners, I have great difficulty understanding the interaction of Japanese scoring with born-to-lose invasions. 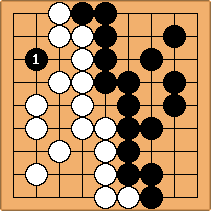 For example, let's say two beginners are playing a game. They don't necessarily understand when an invasion cannot succeed, so Black might play at

, hoping to somehow stake out some more territory. White can capture, but it will take a minimum of four stones to capture that one invader, subtracting from white's score. A poor sport might simply throw stone after stone into the opponent's territory, causing the player to fill in almost all of his territory trying to kill the invaders.

I've read in many places that "Black wouldn't do that," but that assumes the player knows the invasion can't succeed; with beginners it's sometimes not obvious, and if we rearrange the board slightly a clever invasion might be possible. So depending on the players to know what will succeed isn't useful.

For my own purposes I use Chinese scoring, because the stones used to capture invaders won't subtract from the player's score. But Japanese scoring tends to be most common online, so I figure I should understand how this situation is resolved.

So how should beginner players handle this situation?

Shaydwyrm: The thing to keep in mind is that every move that black plays in white's territory also gives white one prisoner, which under Japanese scoring is worth a point. Therefore, as long as white only plays once in her own territory for every invading stone, her score remains constant. White doesn't have to capture each stone, that is, actually remove all its liberties; she just has to keep it dead, so that when the scoring begins the black stones get removed.

Eric545: I understand, but I still have a hard time boiling that down to a simple rule that I can explain to another beginner. What if the other player disputes that a group is dead? What if it's not obvious to either of us? The only way to know for sure is to play it out, which might result in reducing your own score. A beginner is especially likely to play too many pieces during this play, so there's even incentive to play in a beginner opponent's territory.

Gul: If you are not sure if something is alive just play it out. Fill all the dame's etc. Something is alive if it has two separate non false eyes. Even a beginner can figure out a played out dead or alive group

Eric545: Of course. But that's my whole problem: the defender will almost certainly play more stones than he captures, and under Japanese scoring, this costs points. (This is assuming that the invader can simply pass without losing points.)

Bill: Here is a way for beginners to settle such disputes that I have advocated for over 30 years. It works well enough. If, after the dame have been filled, there is a dispute over whether certain stones are alive, see if they can be captured. Play it out, with the attacker playing first, and the defender playing last. If the defender must pass instead of playing a stone, he gives up a stone as a captive. The attacker either gives up, or captures the stones in question. Do not bother to restore the original position. Just score the board as is.

That does not always give you the correct score under Japanese scoring, because it decides end of game positions using different rules than ordinary play. But normally it does. Later on you can delve into the peculiarities of modern Japanese scoring.

Eric545: So the best way to resolve this is by adding a 1-stone penalty to a pass? I can live with that in the real world. But I don't think it's possible to do this in online games. Which brings me back to my original feeling that beginners playing online games using Japanese scoring is asking for trouble. And the gGo client doesn't support Chinese scoring! *sob*

Bill: In the real world, the pass is unnecessary. The defender almost always can play a stone without filling a necessary eye or dame. Here is an example, based upon yours. 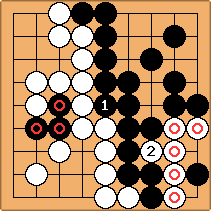 Both players know that the

stones are dead, but White thinks that the

is not a dame, but White does not know that.

Now Black claims that the 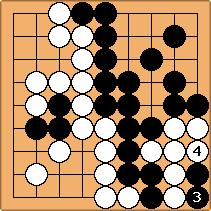 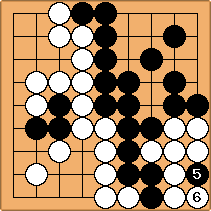 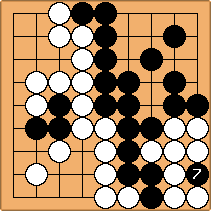 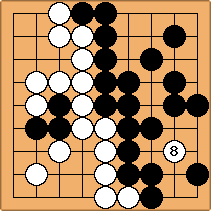 Black has captured the White stones, and White makes the final play. No pass is necessary. 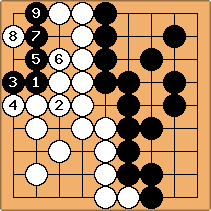 Eric545: (Sorry if I'm being a pain, but I'm still not quite clear on this.) When I talked about about passing, I was assuming that the invader passes, not the defender. By refusing to play and also refusing to acknowledge the dead group, Black forces White to place more stones than can be captured, reducing White's score. Presumably White is a beginner so she didn't play to exact moves needed to capture with the least effort, so in this example Black has placed five stones, then refuses to play more or acknowledge the group is dead. White has played four stones, and must play three more to capture. In this way White has lost two points (-7 in territory, +5 in captures).

The only ways I can see to prevent this are:

1. "White, you should have played smarter." I find this unsatisfying because beginners shouldn't be punished by one scoring system over another.

2. Black must surrender a stone for each pass. That will make the scoring more fair. But online games don't support this.

3. Use Chinese scoring, where White wouldn't lose any points regardless of how poor she plays. This is most satisfying to me, because the pointlessness of continuing the invasion are obvious to all players regardless of skill. Unfortunately, online games frequently don't support Chinese scoring.

Bill: Eric, I'm not exactly sure what is happening, but does

pass, and now Black claims that

and friends are alive, while White claims that they are dead?

Assuming that to be the case, first, fill the dame. 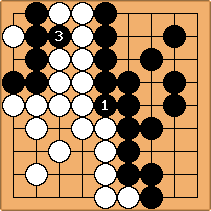 passes, because White says that

is not a dame. Since it would be if Black is right, Black fills it. (The dame do not have to be filled by play, but it is convenient for the diagram, and may be necessary if playing online.) Next, play it out, with the attacker playing first and the defender playing last. 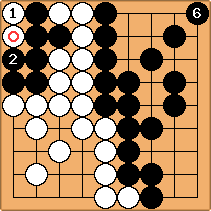 makes the final play that keeps the number of stones played to resolve the dispute the same.

OK? Nobody makes a pass that costs a point. That is only necessary in extreme cases, such as where the only play is to fill an eye needed for life.

Eric545: Aha! Here is the answer I was looking for, from the page Question About Japanese Scoring:

lavalyn: In Japanese scoring, after two passes the players must agree on which groups are dead. If there is disagreement, they settle it in continued fighting, then return the position to the two passes and evaluate knowing for certain whether the disputed stones are alive or not. (The player that wants to save their stones goes first.) This eliminates the really dumb method of needing three stones to kill one.

So dispute resolution is not supposed to be scored. I get it now.

mAsterdam: I am a weak go player (16k KGS) but I have some experience helping to teach go to children. The procedure laid out by Bill (I don't know where it comes from) works quite nicely in practise. The children play against each other. Only when there is a dispute, a teacher is called. This is dead - no it lives! The procedure is explained, and the children resolve their argument themselves. BTW Eric, you are not a pain. I think it is important to ask these questions.

adammarquis: Bill and mAsterdam's method sounds very useful for teaching. Eric's rule find was something new for me too. Perhaps the pass = prisoner rule for kids should make it to the main of the site?

What if there is a dispute about a position that is really seki? I say "they live" he say "no". We settle by play, I have to play first, but that would kill me. Thus I play elsewhere, so does he, I pass, he passes, we're back to start.

Bill: The procedure says to fill the dame first. Second, the attacker plays first. That's him, not you. His pass amounts to giving up. It shows that your stones are alive.

Tas: But above (lavalyns quote) it says that the player who wants to save their stones go first.

Bill: Well, I thought you were responding to what adammarquis said, which referred to the method I have long used, and which I spelled out above. Lavalyn talks about a different procedure, where you play the position out and then restore it. Neither produces exactly the same result as the Japanese rules, which has a different procedure. But why should we saddle beginners with a difficult procedure designed for the pros?

That being said, it should not matter who plays first, since if it does, play should not be over. In any event, a pass by the attacker before capturing the stones is an admission that they are alive.

Bobby?: I am still new to Go, but I have found that what Eric545 says is exactly right. I think Japanese scoring is *fundamentally* flawed and needs to be changed, because I can play a stone requiring opponent to place 4 stones, thus he loses 3 points. Sure that stone is a prisoner, sure the stone can't live, but it's only a capture if your opponent places 4 stones to actually do it. To me, this is not some idiotic situation, if I am behind by 2 points, it makes perfect sense to make my opponent capture that stone with Japanese rules, and I see no reason, newbie or not, to not make my opponent do this, given that I can just keep passing with no penalty.

As a new comer to Go, I don't think much thought went into Japanese scoring, because it makes no sense in this situation that comes up all the time. Online Go needs a resolution to this, because, until then, I see no reason to count that stone as a prisoner as long as it takes them 4 stones to capture, I am happy just passing.

Hyperpape: This is something that used to trip me up as well. A friend and I played together, but didn't understand the rules fully, so we would play inside each other's territory and complete the captures. So we were using several stones to capture one and losing points.

But reread the above discussion, which explains that you do not actually have to capture those stones, so you don't have to lose points, and keep asking questions if it doesn't make sense.

Bobby?: I did read this whole discussion, and why I agree with Eric545 here. I understand the rules, the point is, that Japanese rules are illogical, at least when played online, and I will be playing Chinese rules going forward, until this problem gets fixed in online Go. Prisoners, still need to be captured, so long as I keep passing, the game continues. So, when I can just keep passing, I see no reason why I should end the game until they waste -3 points capturing me.

All I am suggesting, is find a resolution to this in online Go. It does not make sense how it currently works.