At the end of the game, after both players have passed, dead stones are removed from the board. For this to happen, the players must agree on which stones are dead, and which are alive. This phase is mostly informal, as there is usually no disagreement between the players on the status of groups. If there is disagreement over the status of stones, this will lead to disputes, and most rulesets contain rules to resolve such disputes.

If the players agree on which stones are dead, then these stones are removed from the board. Under territory scoring rules, they are added to the prisoners, which are generally kept in the lid of the bowl, while under area scoring rules they are returned to the bowls. 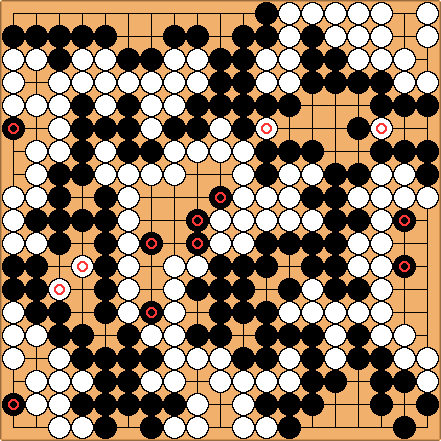 In this example position, all the marked stones, both black and white (

) are dead, and are taken of the board without further play.