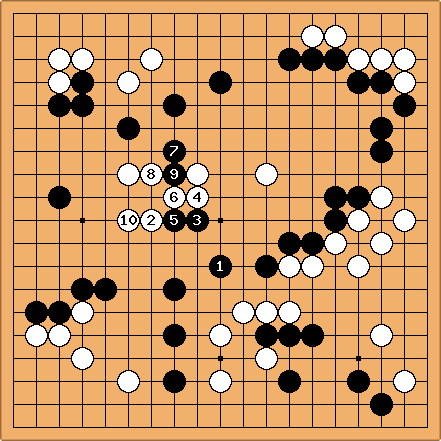 seals up the middle and

stabs toward the bottom weaknesses -- more importantly, though, it attempts to make eye space. There was a chance that White could break through, but I had to worry about that later. First, I had to kill eyes.

felt really good, and being allowed to make the thick

felt even better. And of course,

make the eye there false. Chalk one up for Black! 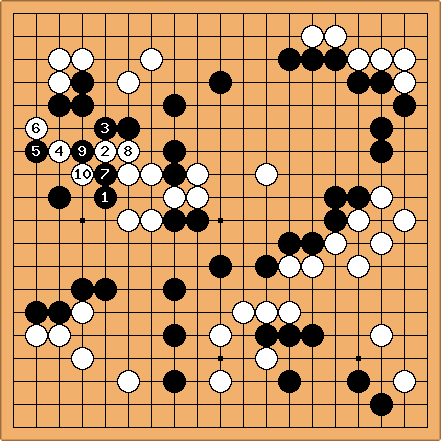 , White gets dangerously close to making an eye.

tries to split Black up, but I kept it together with some pretty slick twisting.

looks painful, but it didn't work. 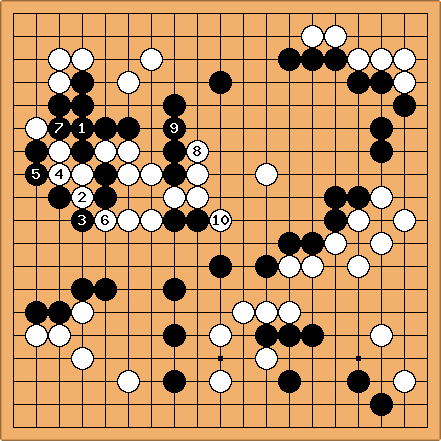 is necessary to surround the black stones, but

forces the capture (I don't think this is the best use of the aji), and Black is happy to do it. Now the pressure is really on White. This was the first point at which I felt like this might actually work. 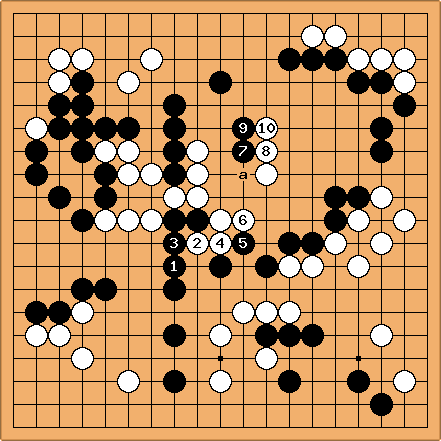 is threatening to steal the eye, and White a seemed obvious to me. But White kept up the policy of "no retreat" and it cost him.

, which is also sente. A case of One-Two-Three. 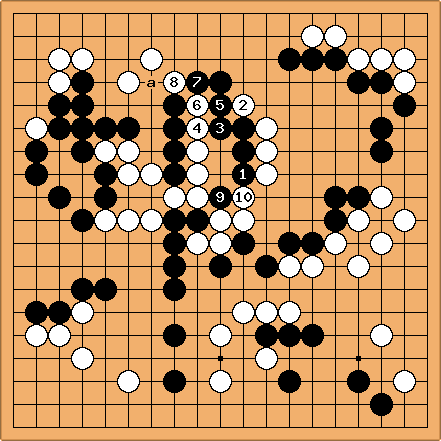 steals the eye. If

is meant to cut Black off, it seems overconfident. I expected White to use the forcing move to make an eye on the right; but no.

worried me a little, but then I got paranoid about a possible snapback near

(but it needed another stone at a, so my fears were silly). Then, of course, I realized that White capturing

-- although it kept everything connected -- still resulted in a false eye. 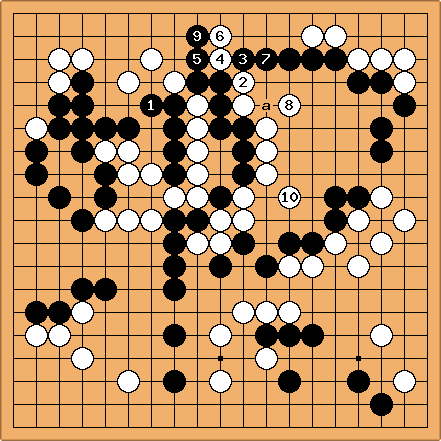 is a paranoid move which resulted from poor reading. White could have seized sente and finished me off. But instead he tried to kill the black beast in the middle with

, which is really close in my opinion. The cut at

is also odd, and

guarantees the safety of the black stones in the middle there. It also makes it impossible for White to make an eye at a. 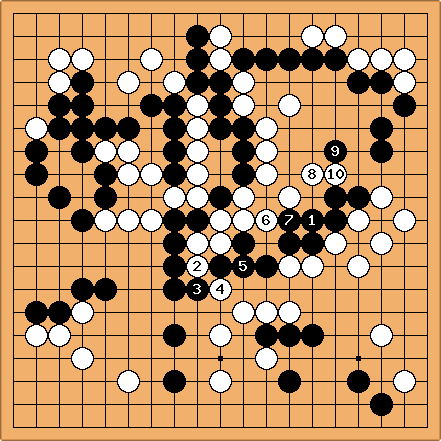 threatens the cut, but

is one of them fancy dual-purpose plays. It connects (White can't push because of damezumari, and it falsifies another eye.

threatens another cut, but 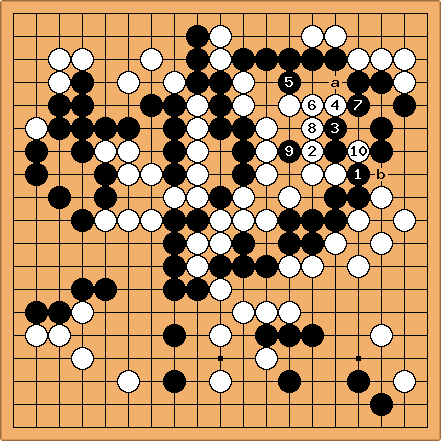 threatens the cut at a, but a simple connection would have been too passive.

sets up the snapback, but White chose to ignore it.

automatic. The throw-in at

worried me a little, but I felt like Black had enough room on the side to make two eyes anyway. I expected White to push at b. 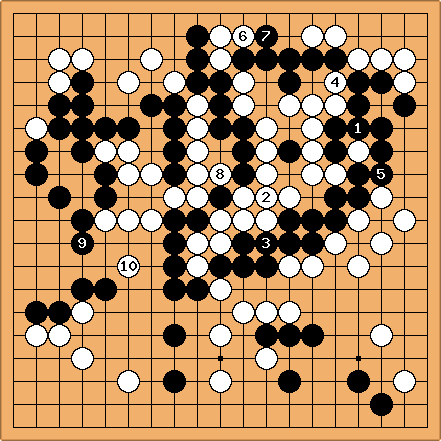 The final nails go into the coffin.

does very little. Black makes sure to live on the right with

, and if anyone can tell me what

keeps things connected, but by now it's too late. A calm

removes the last margin for error.

is a final prayer for Black to slip. 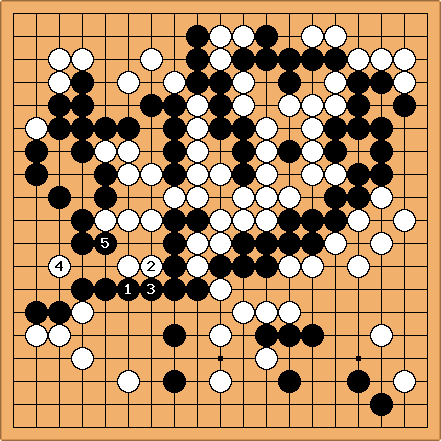 But I knew it was over.

makes everything nice and solid. After

Jasonred : Beautiful... I'm too amateurish to tell which were good plays and which were bad, but I do know that it always feels soooo good when you get into a nerve-wracking, pulse-pounding battle which will win or lose the game for you... and you win!!!

When I look over kifu, some games make me scratch my head (too complex for me). Some make me sigh as I realise how weak I am. Some, I admire for brilliant tesuji. Now and then I smile to myself when watching players even weaker than I am on Yahoo...

On rare occasions, I see a game which makes me cheer with excitement. Actually, make that very rare. (Heck, even during top pro matches the commentator sometimes sounds like he wants to be somewhere else.)

This is one of those games that made me cheer and kept me on the edge of my seat. I admit that I have left off go for a while in favour of playing sports and more "furious" games. Scartol my lad, you have inspired me to return to more active go!

Alex Weldon: It raises an interesting question that I've put on a page called Satisfying Victory Discussion. What kind of wins are your favorite?

Scartol: I just saw these comments (I'm afraid I haven't been too vigilant with my RecentChanges monitoring), so apologies for not responding earlier.

I'm glad this game could inspire others. I think this game is what good Go is all about -- yes, I made some mistakes (there are a few spots where white could have smashed black to pieces), but it's the most thrilling experience I've ever had on the goban.

Anyway, thanks for the kind words.

micheal kris 1k?: as the stronger player herer i can tell you that most of that fight was over play by w you cold have killed him many times many of his moves were even wrong for a fight also i can give you a lot of comments obout the fuseki he didnt play well at all and you didnt take advantge of it a lot of places with over playes and wrong joseki