This article is about balance.

This is an attempt to sketch out an important concept that was never explained to me explicitly. I've tried to avoid repeating other, more helpful, lessons on these matters, and I think I've been successful. However, I welcome responses and/or additions. -- The Author

One of the trickiest things for me as a beginner (and even now as a somewhat competent single-kyu) has been understanding a particular kind of balance. As that page shows, Go is a constant vortex of tension between territory and power. It's hard enough to see this in play, much less understand it.

It's natural to think that the person with the most territory is doing better. (The first time someone asked me, mid-game, who was winning, I just stared at them blankly -- how does one answer? I soon realized that Go players never ask this, because it's more a koan[1] than a proper question.[2]) But of course, the balance of power is as important -- perhaps more so -- than the balance of territory.

Recently, I've come to understand this tension as a continuum of security, which permeates every game at every level, with interesting variations when it comes to differing strengths. This concept has much to do with light versus heavy play, and being overconcentrated versus not, but it goes a little further than either of these alone.

On the one end, we have security; the ease of mind that comes from being safe. A shape with two eyes would be located at the extreme end of this side of the continuum.

On the other end, we have distance; the ability to reach over large parts of the board. The four stones played in each of the corners of most games today is a good choice for the extreme end of this side.

The point for beginners is this: You can't have it all; but to win, you must have both. This is the essential balance that must be struck for successful Go.

The most common style I see in the Go of beginners is something like this: 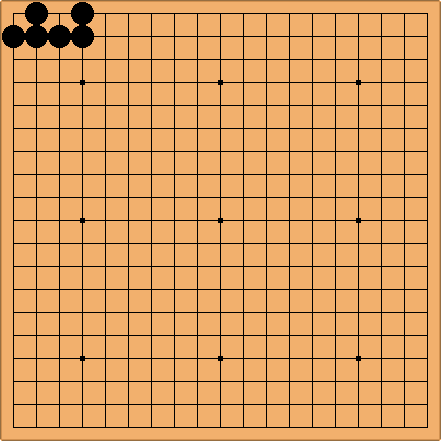 Black lives in total security in one corner (or makes an insanely thick wall impervious to attack). Security is the #1 concern of every beginner I've ever worked with, and for good reason -- nothing hurts more than watching a group die when you've worked so hard to give it life. So they make groups that gain very little territory, but are 100% safe.

Soon after, however, most beginners start to realize that they're stuck at one end of the continuum and, like a pendulum, swing over to the other side and put more emphasis on distance. They cover lots of distance, but find themselves scrambling to live (and dying a lot).

An important corollary of this continuum is that stronger players will tell you (as a beginner) to trade territory for influence; what they may not tell you is that this influence is for distance, and that it comes as the cost of security. The trick is learning how to use that distance/influence to get territory (usually by attacking).

Even now, I feel as though I've played well so long as I don't lose any major groups (even if I fall short on territory and therefore lose).

The trick is to find the patterns, the tesuji, and the methods that most elegantly -- and effectively -- grace the middle of this continuum. There are many time-tested examples of these, but I won't duplicate other SL pages; just know that they're out there.

My final points are as follows:

Not the balance of territory vs. the balance of influence, but the balance tout court.
If you're behind in territory (and this hopefully means you're ahead in thickness) you will start a fight hoping to find territory somewhere while attacking, or at least to mess around things and catch something up. And viceversa, if you're ahead of territory you will try to play safe (provided this doesn't mean slack) to bring home the advantage.
If you're behind both in territory AND in influence, well, you've lost, unless your opponent makes huge mistakes.

So you must be able all the time to swing back and forth over your pendulum in the very same game: In other words, to be flexible and adapt your strategy to what's going on in your game. Use the whole swing!!!

[1] In Zen Buddhism, a koan is a question without a definite answer, meant to inspire metathought/mindfulness/there's probably a better phrase/term I could use here, and assist the disciple toward enlightement. The most common example is "What is the sound of one hand clapping?" (Not the original phrasing)

Tamsin Correct me if I'm wrong, but isn't the idea to use absurdity to flag up the inadequacy of logic to explain all that there is? Sometimes you just have to accept things as they are because there is no rational structure behind many of them.

Charles My guess is that, while Zen has a background that is quite closely related to that of go, it is actually harder to understand. Which is saying something. Therefore I wonder how useful it is to explain go in terms of Zen. After all the paradoxical aspect of go can be mastered by strong players, while Zen clearly tends to some sort of deconstructive conclusion (but not of the trendy type, since for example it is rather conservative).

AvatarDJFlux: Mmmhh, I must confess my thick brain does not understand very well this last phrase, Charles: what is paradoxical in Go? And what is an example of trendy type of deconstructive conclusion??!? ;-)

And, while I am at it, Zen is not harder to understand, it is meant not to be understood! You must not try to understand: in other words you shouldn't use your rational mind to practice Zen. You cannot "explain", you have to become one. BTW, my very saying this instantly contradicts Zen...
Koans brilliantly use an apparent "paradox" to put off, to displace the rational mind, in the hope that the Zen disciple can awaken to a higher and total-encompassing awareness.

(DJ, re-opening his eyes): Zen has a way for everything: for Go as well as for cooking spaghetti, for archery and for motorcycle maintenance.
Here and now, be one-total-whole with what you are doing.

Scartol: Actually, I was hoping for feedback on the main body text, not the footnote. <g> The stuff about Zen and go is better suited in Scartol/Philosophy of Go.

Charles I think balance in go has aspects that seem paradoxical. For example, a very aggressive player may spend much time defending. A style based on influence means that you take territory in places where you weren't trying to take territory, and don't take territory where you were trying to take territory. The centre of the board is small; but an early strategic concept you have to learn is that it may be big. Sometimes if you have too many weak groups, the only way to play is to make more. As one gets stronger one worries less about these things. Of course the famous one is winning by not trying to win.

My general comment about Zen was to suggest that a Zen monk and Derrida wouldn't get along well. A pun from Jacques, reply a whack.

John F. I find the most useful part of Zen is the ice cream koan.

Charles A pun from Jean, we all groan.

John F. Weak joke, true, but weak rhyme, too :) Still, have you not considered the difficulty of clapping with one hand - this is where the ice cream koan comes in.

Bill: AKA the I scream koan.

Charles Definitely time for that old song from the 1920s I Scream, You Scream, We All Scream ... - for mercy (should be ... For Ice Cream, of course).

DJ: Come on, mates, be serious!!! Poor Scartol was hoping for a real discussion, and what happened...? I already went OT, but you're going NUT(s)%%% ;-)))
Scartol, I promise I'll forget about weak rhymes and provide you with my deepest in-thoughts...

Charles Well, if this hasn't yet brought on satori, we may have to intensify the pressure. Let's see - jokes about coning off sections of motorways are probably UK-specific ...

Joshual000 considered the ice cream koan that was not, and yet was. He was then enlightened.

[2] I'm usually put off by Zen references in supposedly technical pages. But in this case I'm puzzled by the remark itself, that go players don't ask who's winning. Why, they do ask it all the time. Of course, observers don't usually ask the players. But players have to ask themselves who's winning, otherwise what would positional judgement mean or, for that matter, how would one resign? Also, kibitzers amateur and pro routinely say: "Black is better now". -- Rafael