Path: <= Give me liberties =>
Sub-page of RobertJasiek
[edit]

Note that plays made for then removed stones are also counted.

Example 1 for different numbers of black plays resulting in different, compared positions: Suppose the task is to create a solid black wall in front of the white stones. 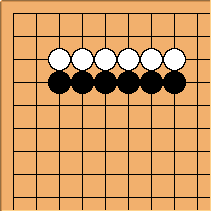 Black achieves the task with 6 plays. This is efficient. 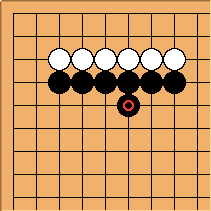 Black achieves the task with 7 plays. This is inefficient, because Black spends one play too many, which he would better play elsewhere.

Example 2 for same number of black plays: Suppose the task is to live while making the most territory. Each diagram needs 6 black stones played.

Black has played 6 stones to get life with 4 points. This is efficient.

Black has played 6 stones to get life with at most 3 points. This is inefficient.

The territory efficiency of a player's territory region is his current territory there divided by his number of stones played to achieve it. [2]

Black has 6 points made by 6 stones played. His territory efficiency is 6/6 = 1. This is better than in Example 3. In relation, Black has made territory more efficiently.

Efficiency is the optimal compromise between safety and speed of local movement. [3]

This more specialised description of efficiency has, however, its merits for related application. 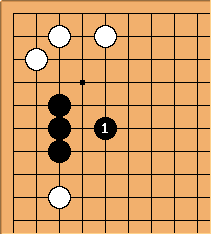 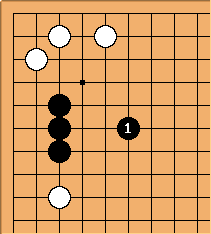 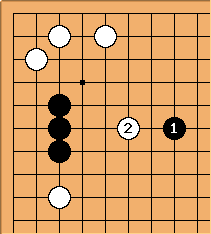 [1] Citation from a draft of a book of Robert Jasiek. Yang Yilun invented (a), while I invented (b). Here, "invention" refers to generalisation.

[2] Citation from Joseki Volume 2 Strategy. In Fundamental Principles of Go, published 2004, Yang Yilun appears to have been the first to relate number of moves and amount of territory. I have clarified division to be the kind of relation.

[3] Citation from and invention in Joseki Volume 2 Strategy, published 2011. "Invention" refers to generalisation. Privately, I made the discovery probably in 1998.