Path: <= Give me liberties =>
Sub-page of RobertJasiek

if you are the person having requested this information, please send me an email from an email address different from <...@daum.net> and <...@paran.com>, whose providers currently refuse to receive my emails to you.

the number of variation of 4 straight Ko is about 19million.

This information is not on my homepage, but available in newsgroup archives. The citation is below. It relies on a few mathematical proofs, of which a part belongs to the field mathematics called "graph theory" and is related to the Marriage Theorem applicable to Bipartite graphs.

(There is a chance that I find time for the Korean Rules during the following days.)

Do you know any Go problems with more plies?

You might find "Mathematical Go: Chilling gets the last point" interesting. It provides some very complicated endgame positions that can be solved use combanatorial game theory. They are exactly like your ladder situations and you may not be looking for that kind of problem.

Go with a prohibition of repeated positions can have quite long problems: (use a fixed width font) 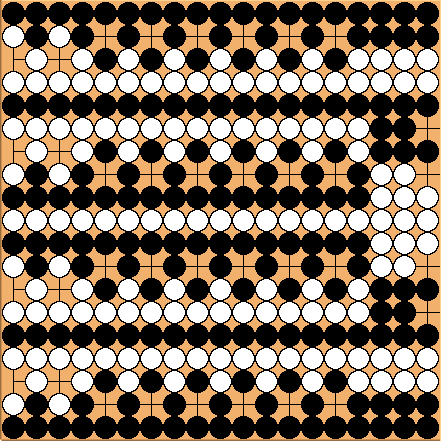 There are 4 8-tuple-kos on the board. According to the proof for the theorem by Bill Spight, which relies on concepts proposed by James Davies and John Rickard and is attached inline, X can destroy exactly one 8-tuple-ko-coexistence after, if I have understood the proof correctly after quickly skimming through it, at most 2 * (8*7)^4 = 19.668.992 plays on the board because within each 8-tuple-ko there are 8*7 defensive positions with exactly two O ko stones, because the number of 8-tuple-kos is 4, and because defensive and attacking positions alternate giving the factor 2.

X wants to win one of the two biggest 8-tuple-kos while O wants to keep them. If all four would be equally big, then O could pass at move 19.668.992. (If you can set up 4 equally big 8-tuple-kos on a 19x19-board, then calculation is easier.) However, O will pass earlier, namely the last time when X can attack a small 8-tuple-ko. I am not sure, which such last time moment is the earliest for X? Anyway, it will be fewer than 19.668.992 moves until one of the 4 8-tuple-kos is dissolved.

Then I suppose there to be an endgame ko fight about 4 points (or about even more?). O should be able to turn at least one standard ko within the remaining 3 8-tuple-kos from an X to a O ko stone. Does this take only a few moves or many moves?

How long is this problem really in case of O's toughest resistance while still following perfect play? It looks like many millions of moves or have I made severe mistakes while applying the proof? What is the correct komi?

was excellent. Let me amend that. It is most excellent!!!!!

did, I realized that it shows that enough basic n-tuple kos allow the attacker to break the final standoff under superko rules, and tells the attacker how to play.

in which, if either player has a stone in all of the ko mouths, he captures all of the opponent's stones, and neither player can capture any stones except single ko stones otherwise.

which one player (the attacker) has stones in all but one of the ko mouths.

in which one of the multiple kos is in an attack position.

which one player (the attacker) has stones in all but two of the ko mouths. This is said to be a standoff favoring the attacker.

in which all of the multiple kos are in standoff positions favoring the attacker.

defender is barred from returning to a standoff position by the superko rule.

position favoring the attacker (and given that the last play was not a play by the defender in the superko), the attacker to move can break the standoff.

of each of the n-tuple kos, determine an attack position for each standoff position in the superko.

did, but it comes to the same thing.

did, but the difference is minor. He divided the positions equally, instead of by orders.

the orders of three of the 9-tuple kos, the order of the fourth uniquely determines which of the kos to play in.