This is an example for an unpleasant analysis by the loser which the winner (ilan) felt obliged to endure..

ilan: One of the heralded features of KGS is the ability to review games upon completion. I am sorry to report that, as far as I am concerned, this has become more of a liability than anything else. The reason is that review typically arises as follows: I play a game in which all my live groups live, all my opponent's dead groups die, and I win by a healthy margin well beyond statistical insignificance, and as soon as the game is officially over, up comes a review called up by my opponent. At first disoriented by the flurry of variations, I notice that all my live groups are dying and all my opponent's dead groups are living. Any attempt by myself to interject a comment is either ignored or brushed off (and on one occasion, insulted). After making some remark to the effect that I probably have nothing to contribute despite having won the game, I close the window and move on.

tb: I don't think there's anything wrong in opponents who do that. A review can be a discussion with the opponent, or it can just be checking oneself to see if one knows moves that will work to avoid the loss one has just suffered. It sounds like in the cases you're talking about, there isn't really any such moves. But still, it's not really good to try and teach someone who isn't asking for a lesson.

OK, I suppose that such behavior is not too surprising, but what I find most distasteful is not the uncooperative nature of the analysis, but its incorrectness and excessive speed. Witnessing such sloppiness of interior thought process fills me with horror and embarrassment, as if I were suddenly to see my opponent dressed only in his underwear

http://www.go-paris.org/photo/3/18/1/ Indeed, years of teaching mathematics has taught me to teach students that a computation should not be done sloppily at top speed, but slowly enough so that care is taken to ensure that each step is correct. Though such care is not necessarily possible during a game, it seems to me that analysis of a tactical situation is a search for truth, and accuracy calls for the slow and careful approach.

My first exposure to machine gun analysis was when a 3 dan player tried to counsel me in the ways of go. Maybe in this case the analysis wasn't corrupted, but I still found it useless because I believe that the most important moves for me to learn were not the ones he thought were interesting, but the ones that came automatically to him. But how could I try to learn anything about them when they were being played at warp speed?

Oh well, I am at least thankful that this is happening over the internet. Back in the old days when I played games IRL, I had to suffer through aggressive post mortem analysis by losing opponents and it was much harder to get out of it. I recall missing the finale of the 1978 Stanley Cup playoffs because my opponent was spending so much time trying to make me empathise with his loss.

Here is my most recent example of Dreaded Analysis: 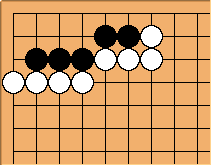 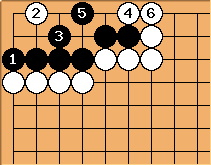 With this sequence followed by a protracted agony, my opponent finally lost the game and immediately opened a review in which he analysed possible defences. I am not sure if my first move

was killing, but the following situation came up in his analysis 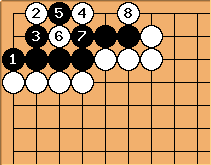 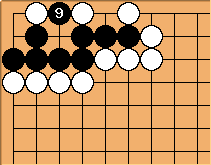 At this point, I am repeatedly typing "don't take the ko" but am ignored by opponent who is playing all over the board exchanging ko threats. After a White ko threat

and a Black response

, White recaptures the ko with

leading to the following diagram: 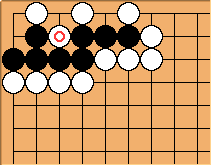 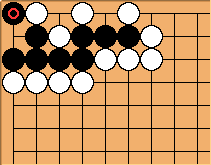 My opponent, unaware of this move and ignoring all my statements finally terminated his analysis when he ran out of ko threats. I was finally acknowleged when he typed: "H1 was simplest" (my

in our game's coordinate system) and then he left. I'm not sure what his statement implies about my play (whether it was good, or whether I am playing easy to see moves), but at least it goes to show that my opponent knew enough English to understand my previous comments. As in all Dreaded Analyses one has to move on...

It was only after going for a bike ride that I finally realised that Black should start the ko in the above sequence because he can always play the life saving double ko if White ever recaptures the ko (this double ko remains the only unconditionial way to live at this point). This seems to confirm my above assertion that correct analysis requires time.

Matt Noonan: There seem to be two types of post-mortem on KGS (and in real life, too). There is the good kind, where you go back and review a game with interesting points and input from both sides. Maybe more common is the bad kind, where the losing player is going over a disasterous game as consolation ("oh, if only I had done this and that, he never could have won! he was so lucky!") This second kind of "review"... certainly better done in the privacy of your own home. Best to recognize this second kind and leave while you can ;)

tb: I sometimes take a game that I have lost through what looked to me like a foolish mistake, and review it, going back to see that I know (or think I know) how to avoid the mistake. This is neither a statement to the opponent, nor any kind of "oh, if only I had done this or that, I would have won", but just me checking to see if I think I know how to avoid a mistake I made. If the opponent wants to watch, he can, but it's not about the opponent anymore.

Bob McGuigan: There is a story about the great Japanese player Sakata to the effect that one day he was in a bad mood. When asked why he explained that things were really bad; he had lost a tournament game and also lost the review. I guess winning the review of a lost game is also common among the pros.

The fact that your opponent wants to look at the game doesn't mean that they want you to look at it with them.

ilan: But these analyses happen after our game is over in the game window where we played the game. If my opponent doesn't want me to look at it, he should just reload the game in a new window starting from his game records. 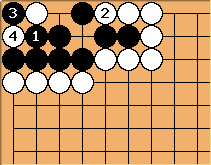 ilan: Thanks. Looks like I needed even more time for this analysis.

Anonymous: what really annoys me about this page is the fact the analysis has had to be updated due to the imperfect thought processes exercised first time around.

unkx80: Related life and death problem. Actually, this is a famous classical problem.

Anonymous: Here's an example of what I would consider a smooth conversation on KGS:

introduction
a> hi, gg
b> gg

after the match
a> thanks for the game
b> thanks

the winner asks if he should review
b> review?
a> sure

if the loser thinks the review is boring
a> thanks for the review, sorry but I need to go
b> no problem, cu
a> bye

if the person reviewing feels it's not worth the time
a> well, that's about it
b> ok, thanks for the review
a> no problem, bye
b> bye

if the loser starts reviewing
b> cu

leaving in general
a> cu
b> cu

ilan Many years after writing this, I played a game in which I had to witness this kind of analysis, made even more painful because it was IRL and I my right index finger was making ineffectual clicking motions as it tried to remove this "window" from my consciousness. Anyway, I analysed my opinion and I have come to realize that there problem is that people doing this are not actually analyzing in the sense of a Search for Truth, that has to be done slowly and deliberately verifying correctness at each move and could take hours, days, or even years, not a few minutes. No, what is actually going on is that the player is merely checking his thoughts during the game by playing them out on the board, I'm essentially witnessing my opponent's core dump, with the emphasis on "dump." That is distasteful because what is considered analysis isn't, the player shouldn't have to verify his mental analysis by playing it out, and, as I stated previously, I find it embarrassing and distasteful to witness the thought processes of mediocre players. In any case, the fact that I have advanced in my understanding after more than a five year interval confirms that one should leave sufficient time for analysis.

Dieter: While your distinctive writing style made me chuckle more than once and the behaviour reported is not at all unfamiliar, I do feel that mutually checking the mental process that went on during the game is really what analysis is all about. "Let me check if there was really no way to live here (so that my intuition of invading here and now is proven wrong", "Let me check if I could really not kill you here (so that my earlier move is proven not to be sente)". I t boils down to attitude, I guess, more than the act of tactical verification or the mediocrity of it all. I do not find it that embarassing to witness mediocre thought processes, as I'm witnessing them all the time, when imagining Iwamoto is looking over my shoulder.

Tamsin: It's often difficult for many people to be objective immediately after a game, so what I do these days is go back to the game after a day or so and carefully review with reference to textbooks and Kogo's. When it comes to correcting mistakes, I find professionally written resources more reliable than most of my opponents. A surprising thing that I notice, both when reviewing my own games and doing it for GTL, is that a game is often lost well before the "and here's where I lost the game" mistake. Time and again, too, the reasons for defeat turn out to be strategic ones, not tactical ones. Does it mean people focus too much on reading, and not enough on whereabouts to play? Anyway, as Ilan probably recalls from his chess-playing days, all too often a post mortem is about the losing player trying to prove that he or she should have won, if only it wasn't for that little mistake or "unlucky" factor in the position.

ilan I should also point out that I am writing up these thoughts here as a direct coping mechanism with post-mortem analysis. Online, I just post the link to this page. During last week's debacle, I gave the page name and told the guy to search for it here, the lone kibitzer actually found it right away on his phone. I am still awaiting a response from my opponent here.

Dieter: That sounds like more trouble than just leaving early. Are you trying to win the meta-review on character?