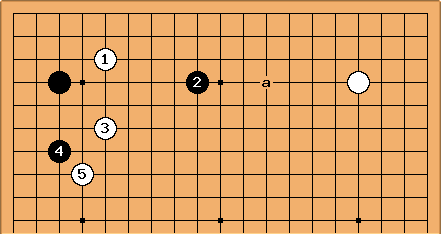 There is a large and complex group of joseki variations with the same basic plan, starting with this side position (Black at 3-4, White at 4-4, White 1 the low approach. White 5 presses Black, and White intends to push for a while, before returning to the counter-pincer at or near the point a. Then it is expected that a running fight will occur on this side, as Black's initial pincer stone becomes a weak group. White gives Black territory on the left side; and in return hopes to build up the right corner framework by attacking the adjacent black group.

This strategy is commonly used in games with a diagonal fuseki, where frameworks are not to be had simply by occupying a whole side.

There are several possible patterns (with two-space and three-space pincers) and a number of technical issues involved of the kind with which pros experiment in games.

One aspect that can be summarised shortly is the orthodox timing for White's play here. Pro games don't always follow this; but there is a clear logic. 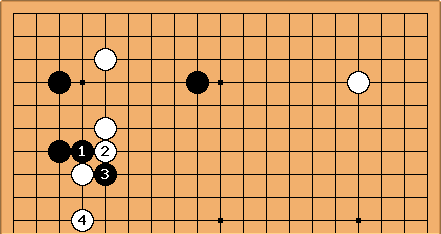 Black may well cut with 1 and 3 here. White needs to find this out before any other exchanges have gone on; because (as it turns out) those exchanges may be less than useful. 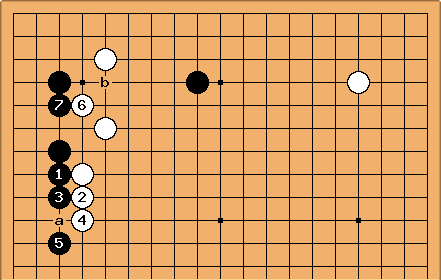 Correct timing is to wait to play White 6 for Black 7. If you are patient Black 3 cannot be at a for tactical reasons. White goes back to 6 at that point, to cut out the tactics Black has starting with b to exploit the thin two-point jump. White may regret this exchange because it loses chances in the corner.

Nevertheless, White 6 now is the orthodox timing, before attacking on the upper side.

At Black 5, Black may play tenuki locally and defend the upper side stone. Then White plays at a. Assuming a diagonal fuseki this should combine well with a white stone in the lower left on 4-4 or 4-3. White should look this far ahead.

The tenuki option being quite attractive for Black, White 6 ought to be after Black 5 as shown. If White plays there earlier and Black defends the upper side, White 6 will seem like aji keshi. So the timing is strictly delimited. 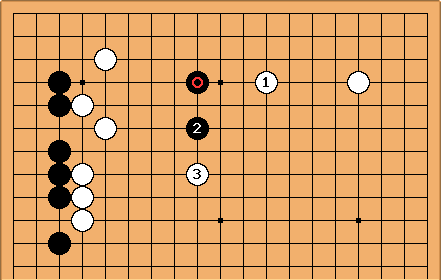 Assuming we get this far, the general scheme of the running fight is as shown, with White 3 an attacking cap making the most of White's strength to the left. The marked black stone was a three-space high pincer, chosen for virtues of lightness and distance from White's future wall.

In what comes next there are in fact many variations and ways of making shape.