This can turn into one of the pushing battle and counter-pincer joseki family. For that reason complex and interesting fights can happen: context (probably assume a 4-4 point for White in the upper right) is very important before deciding on a play like 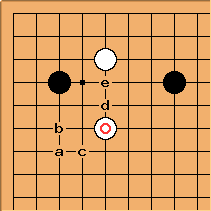 Of Black's next moves: