OK, How to Break Out of Beginning Kyu Levels, (Practical Part)

Please add ISBN and kanji so that we can search for these books online. Scans of a couple pages from the middle of the book would be very helpful as well.

OK, How to Break Out of Beginning Kyu Levels, (Practical Part) (これでOK初級突破法〈応用編 ASIN: 4140160780 ) by Ishikura Noboru, 202 pages. Like the previous volume in his Breakout series, this too followed a series of well-received NHK Lectures on television. According to Ishikura, players throughout the range from early kyu-levels up through about shodan have a problem in common: they persistently misunderstand and thus misplay a certain important set of shapes and patterns that keep recurring in games. This volume targets that class of players and is meant to address precisely that problem. So I think that, for instance, it would be ideal for mid-kyu players, and stronger, with their eye on shodan level; and speaking from a kyu perspective, I believe dan-level players would enjoy it as well. (The proof, perhaps, that dan-level players share the problem with everyone else, is the frequent caption under the theme diagrams: "From a game between dan-level players." Well, all right; just low dans.)

Ishikura adopts some of these chapter titles as "go-attitude proverbs", which he then quotes at appropriate spots throughout the book.

The "weak spirit" of chapter 1 consists in holding back from a strong move and making a timid defensive move instead, for fear of a possible tactical complication which is actually not so hard to handle. Eleven examples are given with full detail. A tacit subtext is, "Improve your reading!"

In all eight examples of chapter 2 the punishment is to kill the invader, except for one variation in which the invader runs out but at great price. These are nearly all corner invasions, including some standard overplays with which stronger players bedevil weaker ones. Part of the task is learning to recognize that an invasion is unreasonable and should be vigorously resisted. One subtext here is "Know your basic life and death positions."

Getting strong at corners means, in this chapter, building survivable corners during fuseki battles, or getting outside compensation instead if the position demands. Seven examples.

Chapter 5 concerns not timidly backing off from ko fights or cross-cut fights when the position requires them. Two examples of each, in early to mid-fuseki positions.

Chapter 6 concerns seizing the initiative in the early fuseki with a one-space low pincer against a low kakari against the 4-4 point. Four examples of the resulting action.

Chapter 7 encourages invading under the 4-5 point, during fuseki, with a move at the 3-4 point. Several examples of play are given. (On the other hand, Miyamoto Naoki, on page 84 of The Breakthrough to Shodan, forcefully recommends a 3-3 point invasion instead, for sub-shodan players. Hmmm. The last example in Ishikura's chapter does in fact lead to the single most elaborate sequence in the book.)

Ishikura's specific advice in chapter 8 is to start playing out the pro game on a board, but then repeatedly set the game record aside and play out one's own fuseki move or joseki sequence, etc., and then compare the result with the pro play. He says that this is particularly valuable for learning josekis, for savoring the professional feeling in fuseki, and acquiring yose strength. As a bonus, he presents a commentary on a game between Kato Masao (W) and Yoda Norimoto (B) from the 4th round of the 1992 NHK Cup tournament.

Here are a few sample positions from the book, along with brief summaries of what Ishikura explains. 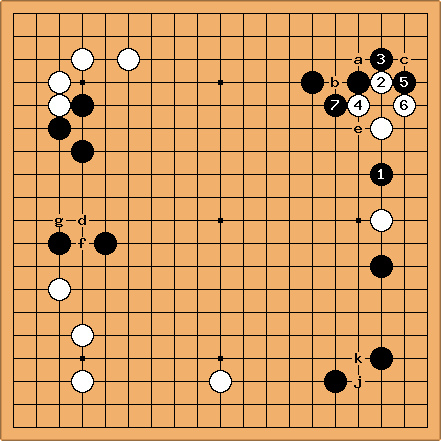 In this invasion position, Ishikura shows a few diagrams in which B connects defensively at a or b instead of playing

, giving W a good result. But weak spirit (and ko-fear) are forbidden -- B must play at 5, inviting the ko. If

(other responses are discussed, too), B makes the first capture "without having to think," then answers Wj with Bk (too big to ignore); and W recaptures. (To save clutter, I haven't numbered these four moves onto the board.) The ko is awfully big for W, so instead of looking for a big enough ko threat B enlarges the ko even more with

! Seeing no advantage in connecting (explained in another diagram), W cuts at c, so B retakes. This has now become a "world ko". W peeps at d but B ignores it and captures 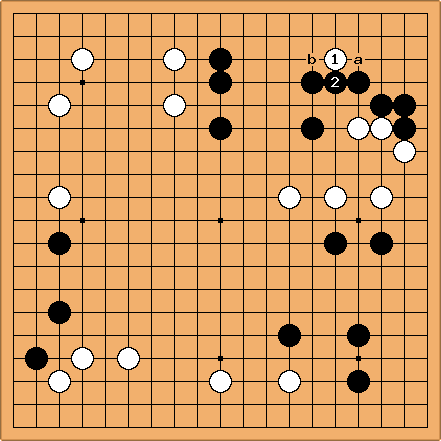 Whether white continues at a or b, black can capture every white stone played locally and should not fear this invasion. Fourteen diagrams are supplied showing both skillful and unskillful play, with general tips for this kind of life and death position. 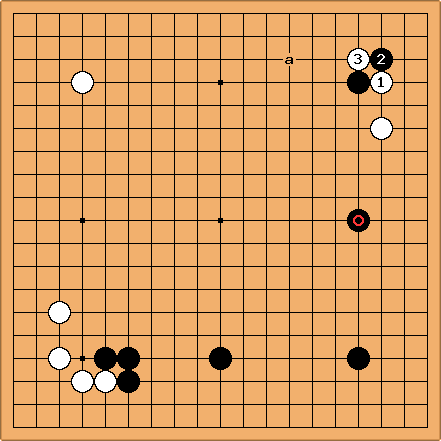 This crosscut fight is discussed in some detail, along with a similar one with the same local crosscut situation except with a friendly black stone at a and the marked stone missing (and other less significant differences).